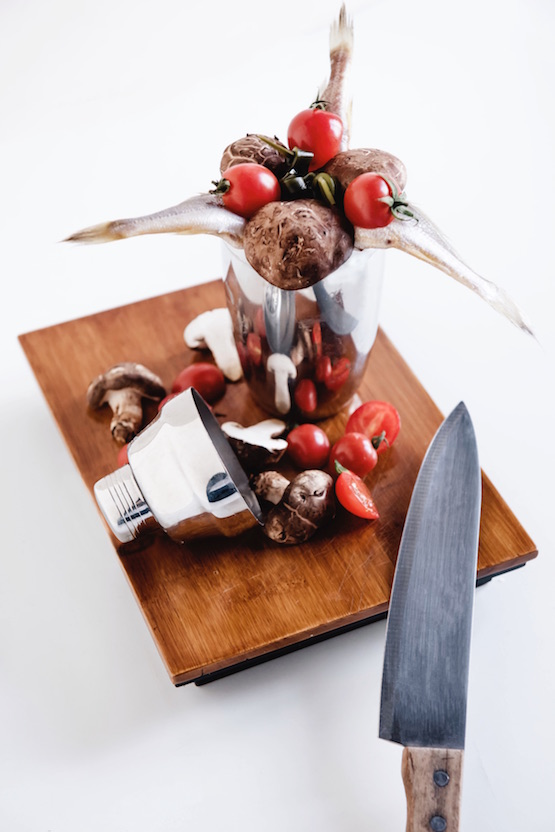 Most of our cocktail creations come with a balance of sour, bitter and sweet. Some add salty, but only a few try to utilise that satisfying fifth flavour category of umami, says Paul Mathew.

Proposed as a distinct flavour type in 1908, umami is often referred to as savoury, meaty, or even more loosely as the sensation of deliciousness or satisfaction. It is tasted by specific receptors in our mouths that are triggered by glutamate, found in high concentrations in foods such as cured meat, tomatoes, mushrooms, shellfish, celery, seaweed and fermented fare such as soy, fish sauce and bonito flakes. It has also been identified in shochu and sake, and is clearly a big part of what characterises baijiu (particularly the sauce fragrance category), as well as mezcal, sherry and some whiskies. Interestingly for cocktails, umami is not only a flavour, but also contributes to a mouthfeel of richness and smoothness that coats the whole palate (hence that sense of satisfaction). It’s strange then, that umami isn’t given more attention in the cocktail world.

Traditionally umami has been the preserve of the Red Snapper, the Bloody Mary and its even more umami-rich relative, the Bloody Caesar. Tomatoes, celery and Worcestershire sauce (containing fermented anchovy) are heavy with glutamate, and bartenders have loved to further tweak this with extra umami in the form of soy, miso or olives; Curious Bartender Tris Stephenson even advocates adding a pinch of MSG – with its concentrated umami-ness – to his Ultimate Bloody Mary. The Dirty Martini too, gets an umami boost from the brined olives, but beyond that, it has taken a while to be accepted as a cocktail ingredient.

As with many Modern Love trends though, umami drinks have started migrating from the kitchen to the bar – a partnership that works well as they can be the perfect pairing for food. Antonio Lai consults with his chefs at Vea in Hong Kong to produce umami-related pairings. “We wanted to create the drinks to enhance the dining experience” he says of his tasting menu creations that include dashi vodka with clarified cucumber juice paired with fatty tuna tartare, and a shitake mushroom whisky paired with the equally umami-loaded eggs, parmesan and truffle – perfect pairings that emphasise the synergistic effect that glutamate has – that a combination of umami-flavoured ingredients will be greater than the sum of their parts. That’s something Tony Conigliaro and the Drink Factory team put to good use when creating their trademark Prairie Oyster cocktail served from a ceramic oyster shell. This deconstructed cocktail comprises a clarified tomato juice “yolk”, shochu and shallot “juice” and Worcestershire sauce “air” on top – all three being heavy umami hitters. That wasn’t enough for the team though: “The secret ingredient that made it come together was green tea,” says Zoe Burgess, head of r&d at the Drink Factory. “We needed an ingredient to bring together the flavours of the dressing and give a little body without texture. Umami has a sense of mouthfeel, so it was a thought when researching the missing ingredient. Green tea has an umami content so was a perfect fit.”

Another umami fan using this synergistic effect is Orson Salicetti at Lumos in New York City. He’s challenging the US palate with the country’s first bar to specialise in baijiu cocktails, and feels the spirit works well with those flavour profiles. “There’s definitely something umami about baijiu – and that’s great. There’s a funk – like sweet, rotting fruit or really good parmesan. You might taste a touch of nutty sherry. On our menu in Lumos we have several cocktails with umami ingredients, including the Sesame Colada with toasted white sesame paste, mangosteen and cooked pineapple, or the Tomato Basil Martini with basil infused baijiu, Lillet Blanc, cherry tomato and Lumos salt.”

Umami drinks have begun to stand alone. “I think it’s really important that drinks work on their own as well as with food. Yes, some ingredients will always work better with food but umami can be quite subtle too, it all depends on what you are trying to achieve,” says Burgess. The team at the newly opened 7 Tales bar (beneath Sosharu, and another part of Jason Atherton’s Social empire) in London are also working to naturally incorporate umami into their drinks without a necessarily foodie approach. “I believe it’s because now bartenders are shifting away from the traditional three main flavour categories, and umami has a lot to give as is not been explored in the past,” says Michele Mariotti of 7 Tales. Social’s beverages manager Jamie Jones agrees: “I’ve played with umami in a variety of ways including using tomato, but it can be found subtly in a huge host of ingredients such as tea, sauces and spirits themselves.” Mariotti adds, “things like sake help a lot, but usually I find umami in earthy spirits, like certain sojus or in aromatised wines. Also, I believe that whisky is somehow a big player here, especially when not too old, and in white spirits sometimes vodka and mezcal can be surprisingly umami-licious.” For Burgess, sherry has been the go-to ingredient for extra umami: “It adds a great savoury quality to drinks and is actually much more diverse than you might think. We’ve had some great champagne and sherry drinks go on menus – The Flamenco at 69 Colebrook Row, for example (sherry, paprika, Peychaud’s and champagne). We did an umami-rich porcini sherry and champagne drink called Amadeus at Grain Store. That was probably the most heavy-hitting umami drink we developed.”

Over at London’s The Gibson, Rusty Cerven and Marian Beke have a focus on umami-packed pickled ingredients, influenced by the eponymous cocktail, in drinks such as their Bamboo No2, which pairs aged sake and aged vermouth with pickled daikon and kimchi bamboo shoots. “People like to explore, constantly looking for new flavours and experience,” says Cerven. “Umami is nothing new, it has been used in Asia for centuries, but our guests are not worried about trying something new out of their comfort zone. That allows us to use a much wider spectrum of ingredients and combinations.” The team drew on their culinary experience when finding ingredients, and also a lot of trial and error: “I used to work with Michelin-starred chefs in my previous job, and saw how they work. That will open your mind and shape up your palate quite well” says Cerven. “When we were building the new menu, we bought everything we were not familiar with and tried that. Then we allocated flavour profiles and categorised how and where we can use it – how to implement more pickles, chutneys and such to highlight savoury and umami elements.”

For Mariotti at 7 Tales, umami offers texture – something that other ingredients can’t match, and something they try to emphasise: “I think, in drinks particularly, the umami perception can be far greater if the texture of the drink is taken into the equation, so here at 7 Tales, whenever we believe that umami is one of the core flavours, we tend to deliver slightly thicker drinks by using different grade of ice and less dilution.” Burgess says they’ve tried alternatives, but umami is unique: “Though I wouldn’t say it was exactly the same, we have experimented with a fat content in drinks through fat washing spirits. Though I’m quite sure nothing will beat umami, it’s an interesting point of research as fats are satisfying in a similar way to umami.”

Although umami is now much better understood as a flavour than it was even five years ago, there is still a lot we can learn and improve on, using it subtly. “As long as it’s balanced correctly there is lots of potential. It’s a case of choosing the right ingredient too, for example green tea has a very different flavour profile to miso but both have umami applications. There are perhaps also more unique ingredients available now, white soy for example and a vast quantity of misos that weren’t there five years ago,” says Burgess. Mariotti sees it as way of standing out from the crowd: “There is a world of wonder behind umami, and somehow we as a category tend to ignore it. Bars that can capitalise on these flavours that are usually overlooked can really offer something unique.”

Paul Mathew is a bar consultant based in Phnom Penh and the owner of The Hide Bar, The Arbitrager and Demon, Wise and Partners in London.

This article was first published in Issue 43 of DRiNK Magazine.