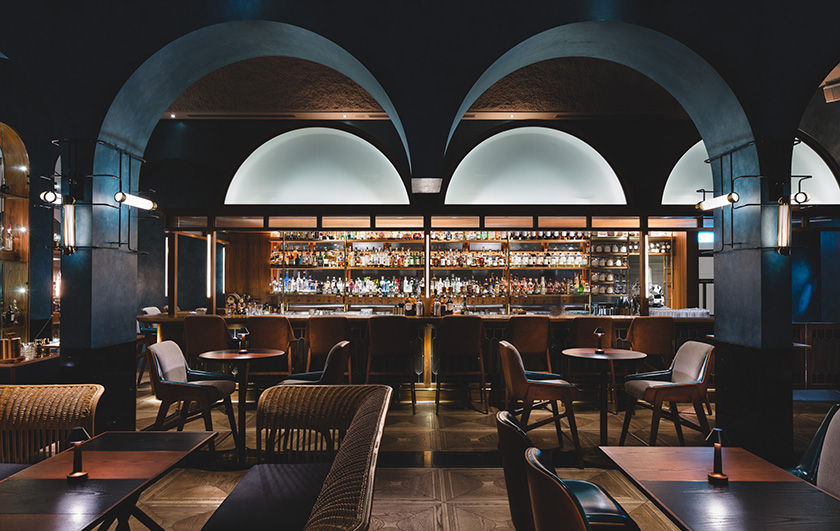 Origin at the Shangri-La, Singapore boasts a rum collection sourced from all over the world, complimented by unique in-house creations and blends.

If rum is to be the spirit trend of 2020 – as many industry folk and global press have claimed – then Origin is ahead of the curve. Their collection of over 350 bottles from 40 countries is bolstered by 13 exclusive rums that are created in-house by bar manager Adam Bursik and team.

This collection of rum is not arbitrary. The Singapore hotel was the first Shangri-La ever built, hence the bar’s name and concept that delves into Singapore’s origins from districts like Orchard to Little India, right up to modern day reclaimed land like Marina Bay. And the man behind the Shangri-La, founder Robert Kuok, is better known as the “sugar king” as he owns huge sugar plantations across Asia. What with rum being a sugarcane spirit, it made sense Origin chose it as its flagship liquid.

It doesn’t hurt either, that Adam used to run a bar called The Rum Club in Bratislava that had a collection of over 300 rums. “I’ve been working behind the bar for 14 years and rum has always been my focus and passion,” he explains.

Adam goes on to detail the challenges he’s had assembling the vast collection. “Our rum program has been in place for a while now, but it’s very difficult to source rums in Asia, meaning it’s taken us a while to get to where we are. We’ve had to save bottles and stash them without people knowing before we launched! We also try and source more private bottlings so we know what’s going on with the liquid, so that also slows things down.”

But his hard work and patience has paid off, as the program of over 350 rums is categorised into navy style rums, sub categories of rums from all over the world and Origin’s own rums. In the interest of sharing the bar’s passion for the spirit, Adam says: “We open every single bottle and each can be bought by the shot. I have a number of special picks that are unique not only in Singapore, but Asia too.”

These include a Havana Club Maximo, three limited release single still rums directly from El Dorado plus their 1970 rum which is the only bottle in Asia. “We sell that for SGD$1,100 a shot – but we have to as the bottle was damn expensive!” The bar also has a 1997 bottle of Diplomatico, with Adam noting the difficulty of acquiring any pre-2000 Diplomatico bottlings, plus Asia’s largest collection of Plantation rums, of which there are almost 30.

Origin’s in house rums range from house aged to house spiced. Aged rums come in coconut and chocolate aged varietals. “Our coconut aged rums are aged in young Thai coconuts and we take the water out, fill them with rum – either The Lovers Rum, Chalong Bay or Diplomatico Planas – then rest them between seven to ten days depending on the rum,” Adam shares. “Initially we tried ten different rums, ageing them over a month and tasting them every day, but after 10 days we found all of them became too sweet and funky.”.

The chocolate aged rums warranted a lot more experimentation due to the varying percentages of chocolate. Adam says: “We have an external company that creates molds of chocolate shells, which we pour the rum into then seal with a cork.” The menu lists the four chocolate rums by type of rum, percentage of chocolate and – like the coconut – how long it’s been aged for. “We use Valrhona chocolate, because after experimenting with lots of rums and chocolates, this was the chocolate we found best. When it came to selecting the rum, it was fairly easy to choose because for example, Bacardi Ocho is a Spanish style of rum meaning it’s sweeter, so we used a 90 per cent chocolate as to not increase the sweetness. We did try 62 per cent, but it just didn’t work.”

Other chocolate aged rums include Cambodian rum Samai (Origin also has a single cask bottling of Sami rum made specifically for them) which, Adam says “is a pretty dry and intense rum, so we age that in 64 per cent chocolate to add some sweetness and mellow it down, but not mask the rum.” He says he sees Origin’s chocolate rums as a new way of food pairing, saying: “Instead of eating the chocolate then sipping rum – which could be masked by your chocolate-coated palate – we’ve bought it together in a way you can appreciate both in one glass.”

The house-made rums come to play in cocktails, too. Along with Origin’s cocktail creations, there’s a menu section dedicated to rum cocktails entitled Balestier District, due to the district being the home of sugarcane plants in the 19th century. Favourites include Ronin with chocolate aged Bacardi Ocho rum, Tsukino-I Umeshu and Camapri as well as the Coconut Daiquiri with young coconut aged Chalong Bay rum, coconut water syrup and fresh lime juice.

Something that Adam thinks is quite innovative is what he calls Origin’s take on gin. “Gin is so popular and obviously rum is our focus, but we still have a big number of customers who drink gin. So we created a silver spiced rum – rums infused for anywhere between 12 to 36 hours with varying blends of spices.” These are then redistilled at the bar to re-clarify them and diluted back to 44 per cent abv because, Adam thinks “this is the best abv with the ratio of 45ml of rum to 150ml of tonic for a highball. The silver spiced rums are designed to go with tonic as it opens the flavours up and adds sweetness.”

Of course, to complete the four styles of in-house rums, Origin has black spiced rums which blend dark rums, spices and sugarcane molasses. The reason? “Lots of bars make their own as it’s fairly easy to make,” explains Adam, “so of course we have to have our own blend because honestly – it’s better than lots of the available products on the market as we can control the sweetness and flavour profile.”

To compliment the collection, Origin also organises monthly rum events, including private tasting sessions, education programs for guests, masterclasses, food and rum pairings and so on. Adam is also proud of the Rum Circle – which is more consumer focused but open to bar industry professionals too. “It’s a coalition of bars in Asia that love and promote rum to educate guests. You get a leaflet detailing which bars are part of the Rum Circle and a coin. If you show these bars the coin they’ll take care of you, and give you tastings of rum and tell you all about them!”

And what does the future hold for Origin’s rum program? Adam reveals that soon Origin will be holding rum auctions selling private bottlings of rums not available in Singapore… “and expanding our collection of rum …lots more rum!”

Ten gins to watch out for on World Gin Day