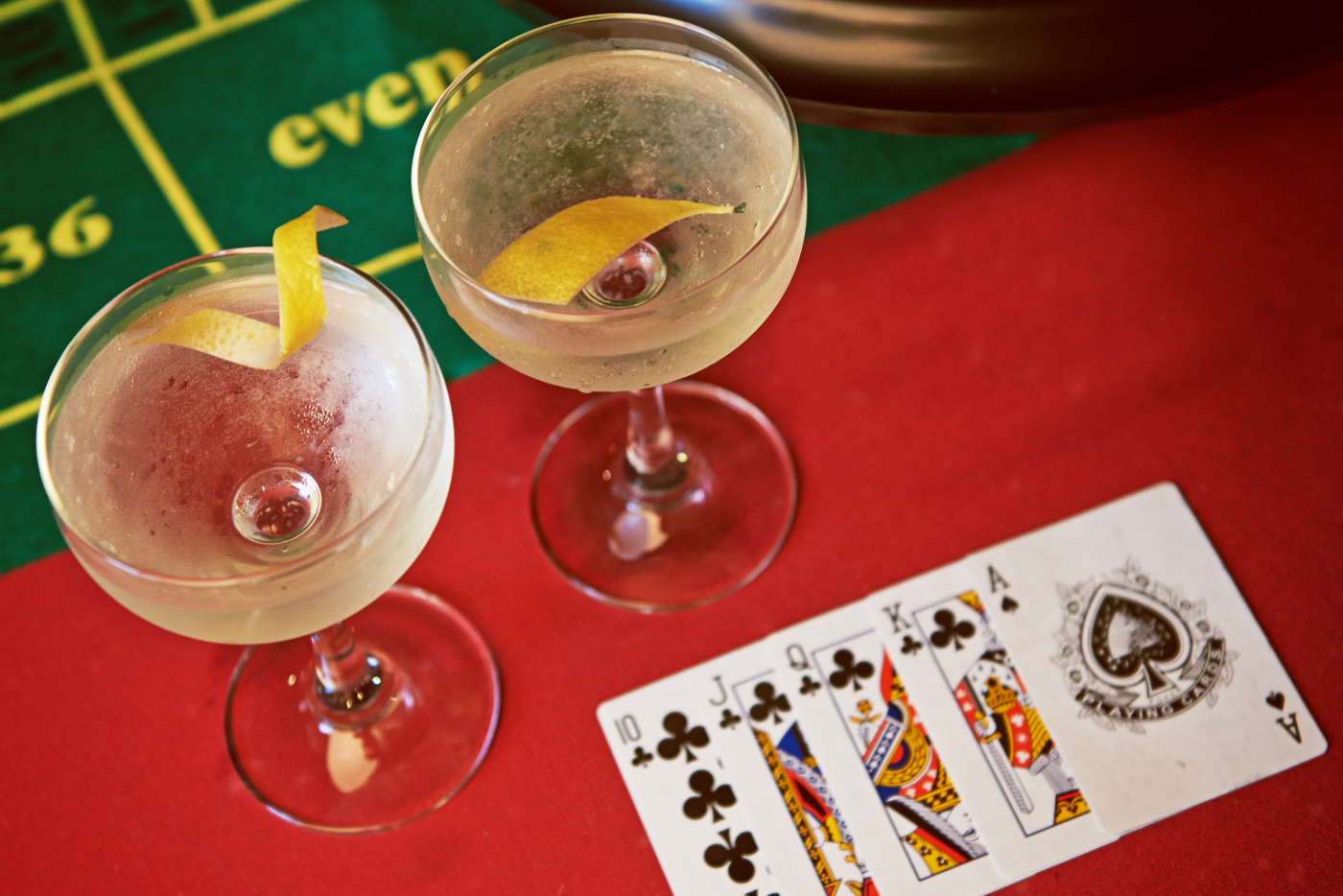 James Bond might have sent the gin category into a tailspin with the vodka martini, but the Vesper is his saving grace. By Seamus Harris

Bond is an equal opportunities dipsomaniac, more likely to enjoy champagne, bourbon or scotch than a Martini. My type of boozer, he mixes things up to match time and location. His very first cocktail, quaffed on the Continent in Casino Royale, is actually an Americano. Later adventures see him go local with raki in Turkey, rum in the Caribbean, and sake in Japan. However, as a Cold War man of mystery, Bond’s signature cocktail was always going to be the Martini.

Of course, the Cold War saw danger lurk in every glass, thanks to the Free World having been infiltrated by bone-dry Martini sympathisers. Gin to vermouth ratios hovering between 7:1 and 15:1 – or sometimes no vermouth at all – became a conformist badge of machismo, approved of by the unlikely cabal of Ernest Hemingway, Winston Churchill and Humphrey Bogart. Unfortunately, these men were all problem drinkers, easily agitated at the thought of anything – even non-distilled alcohol – coming between them and their gin. Their abrasive school of mixology serves the drinker Brutalism in a glass, Erno Goldfinger’s hideous Balfron Tower in liquid form. Familiar name? Fleming named villain Auric Goldfinger in a jab at the modernist architect then remodelling London in the style of Moscow.

Bond’s Vodka Martini may have been another sort of jab, this time a fatal karate chop at the gin-pickled conventionalism then in vogue. When Ian Fleming first had Bond sip on vodka, the Eastern Bloc import remained a relative novelty, though Western liquor cabinets hid a network of sleeper cells ready to splash into action. The Vodka Martini thus combined a conventional façade with a clandestine whiff of jet-setting liberality. I like plenty of vermouth in my Martini, so transport me back to the Cold War and I would be delighted to find Her Majesty’s Secret Service saving the day — though make mine a Vesper please, Mr Bond.

Sleekly modern, agile and lightweight, but nevertheless deadly, the Vesper is a bit like James Bond himself

Sleekly modern, agile and lightweight, but nevertheless deadly, the Vesper is a bit like Bond himself. Sitting between the traditional Martini and its vodka offshoot, the drink recruits quinquina rather than vermouth as its modifying agent. Quinquinas, such as Lillet and Cocchi Americano, are a class of aromatised wine distinct from vermouths. Rather than leading you around the herb garden, quinquinas suggest a wooden medicine cabinet stuffed with dry spices. Some formulations (say, modern Lillet) have evolved to become light and subtle, basically fruity wine with a dusting of aromatics. But traditionally these aperitifs were intense, sweet scented, and balanced by a powerful bitter kick. However, the true secret to the Vesper is some vodka slipped in as a flavour magnifier. Like one of Q’s gadgets, vodka looks pedestrian, but deployed correctly will magically enhance other tastes. A shot of vodka avoids the delicate Kina Lillet suffocating under a pile of juniper. Doubters can try balancing the drink without vodka. Increase the quinquina and you slide into a bitter-sweet honey trap. Vodka keeps the Vesper dry, and avoids compromising its mission of pre-prandial refreshment.

Bond asks for a “champagne goblet” – in other words, the bowl-shaped coupe used for champagne that was replaced by the flute in the 1960s. This reason is simply that his thirst exceeded the dimensions of the cocktail glasses popular in the 1950s. In a bar setting it may make sense to scale things down.

The original recipe called for Kina Lillet, which no longer exists (see timeline below). Try to substitute Cocchi Americano, a quinquina still made in this old-fashioned style. Bond’s preferred gin is Gordon’s, which in the 1950s came at a higher proof. The export strength Gordon’s sometimes available in duty free is perfect, or substitute any good strong gin. Finally, while grain vodka is ideal, Bond did not insist on this point commenting, “Mais n’enculons pas des mouches” – a vulgar way of saying, “Let’s not split hairs”.

The Reverse Vesper is a variation that caters to lighter contemporary tastes and ingredients. By reversing the ratio of vodka to gin it reveals the subtleties of the delicate modern Lillet Blanc. Regardless of their indoctrination on ratios of vermouth to gin, most drinkers should find the two Vespers a seductive change of pace. These drinks may even convert those who claim to be allergic to vermouth and gin, and offer a flavoursome twist on the dull Vodka Martini.

1887 Lillet is developed as a blend of white Bordeaux wines with an infusion of orange peels and spices – notably quinine-containing cinchona bark from Peru. Quinine was a wonder drug of the 19th century, and quinquinas (aromatised wines containing quinine) had existed for decades as anti-malarial tonics, with Dubonnet the leading example. Lillet creates a fashion for white quinquina though, and is imitated by the likes of Italy’s Cocchi Americano – launched in 1891. First marketed as a bitter medicinal drink, Lillet’s formula is soon tweaked to win more consumers – especially females. Multiple variants circulate during the late 19th and early 20th centuries, including Amer-Kina, Kina Lillet, Lillet Francais, Lillet Dry Export, and even a Lillet Vermouth. Harry Craddock serves as brand ambassador during the 1930s. Numerous drinks containing Lillet appear in Craddock’s Savoy Cocktail Book, and he fronts Lillet advertising in trade magazines.

1953
Ian Fleming unwittingly fuels the vodka rocket with the publication of Casino Royale, in which Bond orders a Vesper as follows:

“A dry martini,” he said. “One. In a deep champagne goblet.”

“Just a moment. Three measures of Gordon’s, one of vodka, half a measure of Kina Lillet. Shake it very well until it’s ice-cold, then add a large thin slice of lemon peel. Got it?”

“Certainly, monsieur.” The barman seemed pleased with the idea.

While the Vesper remains obscure, Bond’s shaken martini with vodka becomes a pop culture hit as the Bond films make the “shaken, not stirred” line the biggest cocktail cliché of all time.

1955 Vodka explodes across the US, with sales increasing from just 40,000 cases per year in 1950 to four million cases in 1955. Most is consumed in drinks like the Moscow Mule, Bloody Mary and Vodka Martini – then sometimes called the Kangaroo. Vodka had first begun to carve a niche in US cocktail culture after Prohibition. American bartenders who sailed off to sling mixing tins in Europe had returned with exposure to vodka. New York’s Gypsy Tearooms even published a vodka cocktail recipe book in 1938. But it was not until the 1950s that vodka spread beyond the major metropolises.

1986 The trend towards lighter flavours, something Bond himself had pushed, makes it increasingly difficult for the agent to get a proper Vesper. In a symptom of post-imperial malaise, rising excise taxes and a sluggish economy encourage Britain’s gin distillers to cut their products with more water. The standard bottling strength for English gin drops to approximately 40 per cent – compared to 47 per cent previously. Gordon’s is among the many casualties. In France things are no better. Lillet gets reformulated in 1986 to become lighter, less bitter, and presumably, less effective against malaria.

2006 The Vesper enjoys a minor revival as growing interest in cocktails has a couple of fortunate effects. First, the producers of the 2006 screen adaptation of Casino Royale include a scene where, faithful to the book, Bond instructs a bartender in making the obscure drink. The Vesper soon spreads from the silver screen to real bars, and the Reverse Vesper is developed to better match Lillet Blanc. Second, San Francisco bartender Erik Ellestad (who famously recreated every drink in The Savoy Cocktail Book) identifies Cocchi Americano as a perfect substitute for the discontinued Kina Lillet.