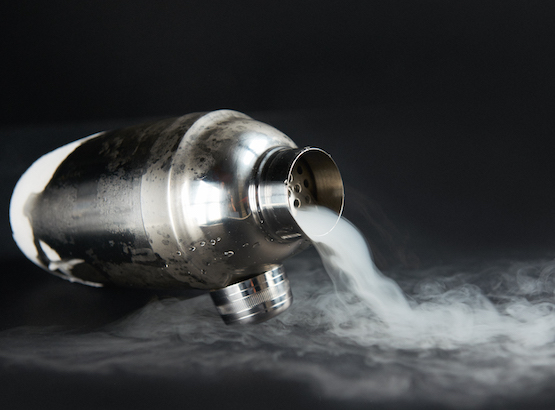 If you want cocktails with smoky flavours, there’s nothing better than the real thing. By Paul Mathew.

As with so many of the bar’s modern trends, smoking is a technique borrowed from the kitchen, where it has long been used as a method of preserving and flavouring everything from tea and fruit through to meats and fish. Smoke has a natural place behind the bar too though, with smoky spirits such as Islay whisky and mezcal (where smokiness is added at the malt-drying and agave-roasting stages, respectively) playing an important role in adding layers of complexity to mixed drinks.

For this piece on modern classics though, we are concerned with the application of smoke to a drink, rather than just adding a splash of a traditionally smoky ingredient. Bacon washes and mezcal mixes are out – we’re talking smoking guns, charred wood and smouldering spices.

It was bartenders such as Eben Freeman, Jamie Boudreau and Frankie Solarik who first experimented with the smoking techniques of modern molecular chefs. In 2007, Freeman put the smoked-cola Waylon on the menu at Tailor in Manhattan, while Solarik put his Vanilla and Hickory Smoked Manhattan on the drinks list at Bar Chef in Toronto in 2008. These two drinks serve to illustrate two different approaches to using smoke in a mixed drink. In Waylon the cola syrup was smoked over cherrywood chips, taking up the flavour and retaining it. The result was a consistently flavoured drink reminiscent of drinking Whisky and Coke by a campfire, but with no visible smoke. Solarik’s Manhattan by comparison, uses the smoke in a more theatrical manner for aroma and presentation. The drink itself also contains hickory-smoked syrup, but it is the glass jar that retains the smoke from charred hickory wood and vanilla that makes the drink visually arresting.

So while smoking an ingredient for flavour offers consistency and depth of taste, smoking for aroma offers a degree less uniformity, but a lot more visual impact. The choice of ingredient to smoke might vary too. “When smoking a cocktail for flavour I usually use teas or dried fruit and never wood,” says Boudreau. “When smoking drinks for aromatics, I’ll use wood, but usually will infuse the wood with flavours. In the Campfire In Georgia we use toasted French oak infused with sugar and cinnamon, which offers a much better aromatic than wood or cinnamon alone.” Infused wood chips will burn for longer than teas or fruit, giving that cloud of smoke that is so eye-catching. As another fan of cocktail smoking, Antonio Lai says this is part of the key to the success of smoked cocktails: “And as soon as we serve the first smoked drink of the night, other guests see it and want to order one for themselves too!” (Try his Black Pearl at Quinary in HK, served in a decanter with “umami smoke”). Indeed Solarik claims he has sold more than 20,000 since his smoked Manhattan went on the list at Bar Chef, receiving international press and drawing people from across the world to Toronto just to try it.

The smoking gun is an entertaining tool for bartenders and clouds of smoke are visually appealing for customers, so it’s no surprise that for a few years either side of 2010, smoked cocktails spread around the world like wildfire. It wasn’t unusual to walk into a bar and smell smouldering oak, and every cocktail competition would feature at least one bartender frantically trying to light an ingredient with a blowtorch before swirling a drink around in a smoke-filled decanter or mixing glass. Eye-catching though these drinks might have been, many missed the mark, and the popularity of smoked cocktails started to wane as customers tired of acrid, over-smoked and poorly executed drinks. Moving forwards, those who still offer them on their lists are frequently the scientific bartenders and exacting perfectionists who pioneered them in the first place – those that understand the methodology and who use the technique to improve a drink rather than just for the sake of it.

Temperature, time and cleanliness can dramatically affect the quality of the smoke. Tristan Stephenson covers these very competently in his book The Curious Bartender. Stephenson notes that there is a perfect temperature for aromatic smoke: “Below 300C most of the smoke produced by smouldering wood is the result of cellulose and hemicellulose breaking down. This contains some of the more acrid and astringent compounds. Most of the positive aromatic effects derive from the breaking down of lignin [into carbonyls and phenols at temperatures over 300C]. As the temperature of the wood reaches 400C it has the best flavours.”

However over 1,000C, all the pleasant aromatics also burn, so when using a hot blowtorch to ignite the wood, you’re advised to let it cool a little and start to smoke well before using it for a drink. Equally, if using a cigarette lighter, it’s best to leave a few seconds for the lighter fuel taste to burn off or you’ll be adding more undesirable notes. Perhaps consider the process of lighting an expensive cigar – you want a hot, clean flame and an even glow.

As for duration of smoking, shorter is definitely better: “When using smoke as a flavour note, it is essential to ensure that the smoke is fresh and that the liquid has no more than two to three seconds of contact, or the smoke will overpower the drink or be stale,” says Boudreau. A good example of this comes in the form of Mr Hyde’s Fixer-Upper from Purl in London, which while a very successful bestseller, offered some challenges: “Mr Hyde’s was visually quite spectacular and the guest had the chance to see the smoke which was part of that. Problem is that smoking drinks live offers virtually no control over how smoky the flavour will turn out – there are way too many variables at play to do it by eye,” says Stephenson. When serving the drink Purl’s team would therefore make it clear to the guest that they could decide how smoked the drink became by how long it remained in the bottle.

Finally there is cleanliness. “The repeated heating and cooling of oils can result in them being broken down into foul-smelling compounds,” says Stephenson (something Julian de Feral of Gorgeous Group describes as the “wet ashtray note” present in poorly executed smoking). Boudreau adds: “We need to swap out filters every week. Each fill of the smoking gun is for one use only. If you burn twice or more the smoke is no longer fresh.” One way around this is with a technique pioneered at The Aviary in Chicago, where the Bitter cocktail was served in a glass that had been smoked with a whiskey barrel stave – the staves were cut into glass-sized squares, then burned with a blowtorch until smoking. The glass was then turned upside down over the smoke to trap it. Afterwards, inverting the glass and pouring in the drink released the smoke for visual impact, while the smoke lining the glass imparted a subtle smokiness.

The use of smoke in mixed drinks has evolved considerably over the past decade, from avant garde creativity, through mainstream over-use and now out the other side where it has hopefully found its place as one of many techniques that can be drawn on to complement a drink made by the modern bartender. It is often used to add visual impact, but according to Lai, “Ultimately, the use of smoke in cocktails is not about the wow factor, but instead to enhance the taste of the drinks. Use it wisely.”

Perhaps a good example of this comes from Stephenson’s favourite smoked drink, tasted at an event for Sipsmith gin: “Jared Brown (Sipsmith’s Master Distiller among other talents) smoked some gin in a barbecue smoker using cherry wood chips, but it was sat alongside a haunch of venison too. It was basically just a smoked gin, but it was fantastic, a proper celebration of smoke flavour” – which is perhaps what smoking drinks should be all about!

This article was first published in Issue 40 of DRiNK Magazine China. Subscribe to the magazine here.

Get to know: Charro Negro