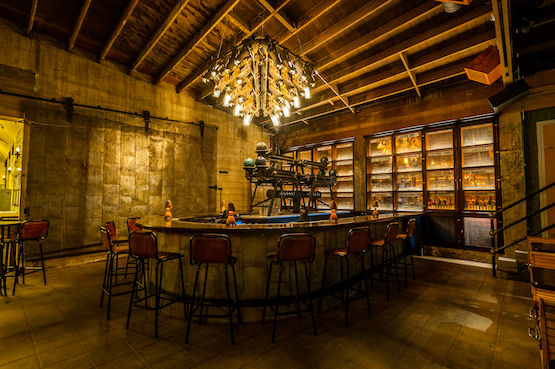 Highland Park Bowl gets a new lease of life in the City of Angels. By Jonathan White.

Already on a roll reviving the city’s history through their f&b venues, Los Angeles-based 1933 Group has again struck it rich with their latest project – the Highland Park Bowl. LA’s oldest bowling alley certainly has a lively past. Opened back in 1927 it provided Prohibition-era Angelenos the opportunity to booze and bowl by virtue of also housing a pharmacy and a doctor who was willing to hand over prescriptions for medicinal whiskey. The venue also had a live music permit and over the years, after subsequently becoming Mr T’s Bowl (no, not that Mr T), the lanes gradually went to rack and ruin leaving nothing but a gig space beloved of the local punk scene. The eponymous Mr T went to the bowling alley in the sky in 2005 and the new owners took hold of the space last year. They have since stripped it down to find the original Spanish Colonial Revival architecture preserved beneath, as well as a mural painted during the 1930s Arts and Crafts Movement, both now painstakingly restored. They’ve not solely relied on the original aesthetic, though, adding their own touches with the same attention to detail. Vintage pinsetters turned into chandeliers, old bowling lockers in the bathrooms and sawn-off pins re-purposed as bar lamps are among the highlights. These references are found throughout from the eight bowling lanes to the horseshoe bars where you can enjoy draught beers and a craft cocktail list that pays tribute to bowling, bowling movies and even the movies filmed at Mr T’s – and there’s a Moscow Mule and Old Fashioned on tap. Just like the original, it’s all things under one roof. The venue’s live music space, Mr T’s Room, is in the location of the original 1927 music store, while local beard owners will be pleased with the plans for an on-site microbrewery. Highland Park Bowl is that most rare of things: a true taste of the Prohibition Era that not once mentions the word speakeasy.