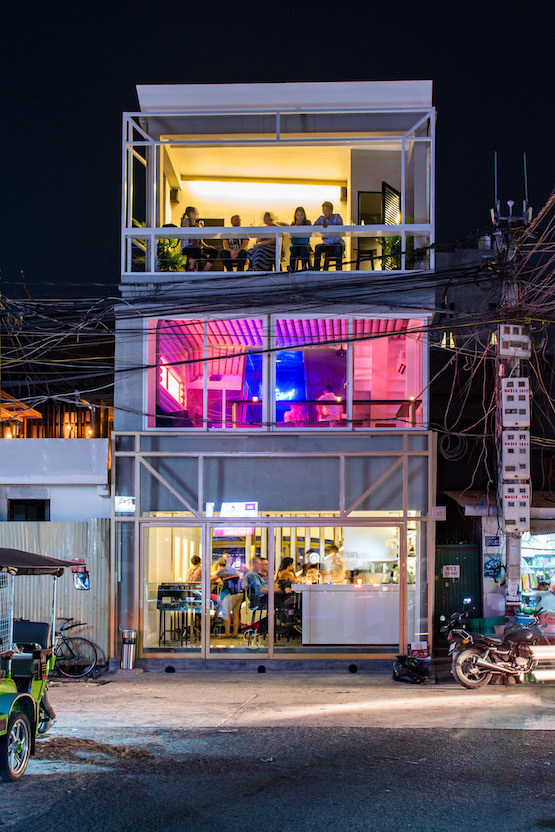 Pedigree is the key for Le Boutier in Phnom Penh. By Paul Mathew.

Phnom Penh isn’t the first city that springs to mind when discussing Asia’s cocktail culture. But with cheap start-up costs, few legislative barriers and markets full of fresh local produce, it is now attracting the attention of international bartenders looking to carve a creative niche in the Kingdom of Wonder. One of the most recent additions to the city’s eclectic nightlife is Le Boutier, opened by Chicago bartender Annemarie Sagoi and French-Cambodian David Chhay, also co-owner of Pouring Ribbons in NYC. They first came on a consulting project that failed to materialise, but having seen what the city had to offer, decided to create something of their own, drawing on Chhay’s family history – he grew up two streets away from the bar.

The bar is named after Chhay’s mother (Boutier is her maiden name) and glamorous photos of the family are dotted around, if you know where to look. They moved to France in the 1970s to escape the Khmer Rouge period, but prior to that, Cambodia’s capital had been an exciting city with a great atmosphere, something Sagoi and Chhay wanted to capture. “We wanted to celebrate the golden era of 1960s Cambodia that not many people know about,” says Sagoi. “We think it’s now going through a parallel time – there is more foreign investment, collaboration, the economy is improving and even in the last five years, we’ve seen a major growth of cocktail bars and hotels.” The quality of the bar scene had been lagging behind, though, and when Sagoi arrived, she felt the opportunity. “There are a few cocktail bars, but it’s where the West was 10-20 years ago. Drinks aren’t quite balanced, there are a lot of artificial ingredients and there isn’t a great knowledge base as far as spirits and technique goes.” Indeed, as well as opening the bar, Sagoi hopes to help the bar scene in general: “Where I come from, it’s very education-based with seminars and training all the time. We really want to help with classes and training to help the scene find out more.” With all the seasonal tropical fruit and other spice-route ingredients that Cambodia produces, there’s clearly a lot of potential.

While start-up costs are much less than in many big cities, Sagoi faced her fair share of challenges in Phnom Penh. “I’ve been part of a lot of bar openings as a consultant or a manager. They’re hard. Things are always late, surprises happen: you thought you had the bar set up with sinks here, then you realise the water is over there.” On top of that, Cambodia offered specific challenges, including communication. “Everything has been discussed in French, English and Khmer, so there are lots of things that got lost in translation. There are also cultural differences – the biggest that people here don’t like to say ‘no’, so there are lots of promises that get broken. That’s been really frustrating.” Sourcing was also difficult, for example – “I can’t work with ice that’s shit” – the many trips it took to bring in Hoshizaki ice machines. “In Chicago I know just where to go for glassware, a dehydrator, things like that,” she says. “Now I have a friend bringing out a dehydrator from Australia because they just do not exist here. There’s no rep with a catalogue. At The Dawson [one of Sagoi’s previous workplaces in Chicago], I used to specialise in antique glassware that I’d collect, but here there is none of that.”

Finding a good team when the market is young poses other difficulties. “The secret of running a good bar anywhere is your staff – it’s true here, it’s true in Chicago, it’s true in South Africa. You need to have people that are engaging. You can drink anywhere, you can drink at home – it’s cheaper and you can make it just how you like. But in a bar it’s more social and if you have a bartender that’s entertaining, you’ll want to come back. The Khmer way can be quite standoffish, but we’ve gone for people who have no experience but are friendly and willing to engage. I would rather have people who have never worked a bar before.”

While expats currently make up most of the market for craft cocktails in Phnom Penh, Sagoi hopes to broaden their appeal. “There are a lot of little things we did to attract Cambodian customers – for example there’s a lyric from Cambodian singer Ros Sereysothea on the window in Khmer that says, ‘Wine is delicious but my beauty is sweeter.’” As well as educating the Cambodian consumer, Le Boutier hopes to offer a little Cambodian orientation to expats or those passing through. “I’m under no illusion that we’ll be full of local Cambodians wanting $6 (¥39) cocktails, but even if you’re an expat here and have no knowledge of ’60s Cambodian rock and roll, there’s education with every drink on the menu,” she explains. “We’re giving people a bit of appreciation about where they live rather than just staying in a little bubble.” With that in mind, the drinks list at Le Boutier references Cambodian music and culture – drinks like the Monkey Dance, named after singer Pen Ran, containing pisco, rhum agricole, sherry, lime and egg white; or the Sinn Sisamouth in the Second City, named after the “King of Khmer Music”, and containing bourbon, honey, Averna and coffee-cinnamon tincture. Also the food, which as well as introducing Western ingredients uses a lot of local flavours – sticky rice syrup, ginger, longan, kaffir lime, curry and fish sauce. The drinks are also designed to ease people into more challenging ingredients and the international craft cocktail style. At the moment, Sagoi says, “People just order Espresso Martinis, saying ‘It’s not too sweet and I don’t know what else to order.’ That’s where we are now and I’m not trying to take them to London or New York. I’m trying to go for a middle ground with ingredients like egg white and pisco – approachable, good quality ingredients, some a bit boozier.” Nonetheless, Le Boutier also has what is probably the best selection of spirits in town, so they’ll be ready to take their customers all the way along that cocktail journey if they want. The craft cocktail market in Phnom Penh may be lagging behind, but with bars like Le Boutier and bartenders like Sagoi in town, it’s soon going to catch up.

Recipe (Click to view)
One Thousand Tears of a Tarantula

One Thousand Tears of a Tarantula by Annemarie Sagoi