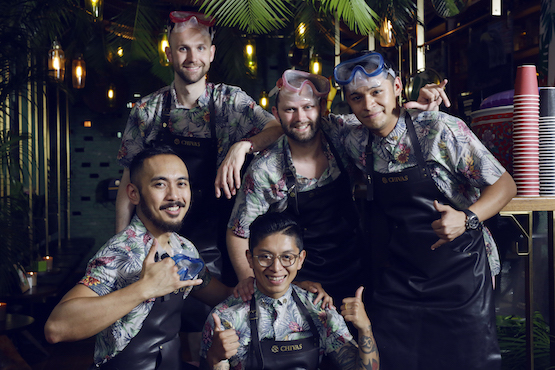 After five days of intense competition the Chivas Masters Global Final has concluded in Shanghai with an awards ceremony in the Long Bar at the city’s historic Waldorf Astoria.

For the first time, this year’s completion culminated with a team challenge, where the top three of the 15 bartenders from around the world – as decided by the judges over a series of challenges – had to lead a team made of their fellow finalists in executing a pop-up bar.

The UK’s Chelsie Bailey, France’s Aurelie Panhelleux and Mexico’s Alejandro Millan Ponce de Leόn picked from their peers and then the teams had 24 hours to come up with the concept, the drinks and the design of their bars before taking over an existing venue in Shanghai’s Zhang Plaza and making it their own.

The concepts varied dramatically, from the English tea room atmosphere of the UK-led Ace of Cups, the Mexican-run beach bar of Beach Brothers to the leafy lounge of the French-spearheaded Don’t Leaves.

Industry insiders were invited along to put the pop-up projects to the test and cast votes as to which was the best in the categories of drinks, service and atmosphere. The winning teams for those categories were as follows:

Those awards were just a taster for the main event, though. The judges (Naren Young, Leo Robitschek, Dre Masso and Chris Lowder) still had to name this year’s Chivas Masters and they picked the Beach Brothers bar. Chivas global brand ambassador Max Warner handed the trophy and tickets to Tales of the Cocktail in New Orleans next month to Mexico’s Alejandro Millan Ponce de Leόn and his team of Tomas Melzer, Ben Rojo, Stanislaw Domin and Santiago Ortizjacome.

This year’s 15 finalists were:

The green light has been signalled for craft cocktails in Cambodia.