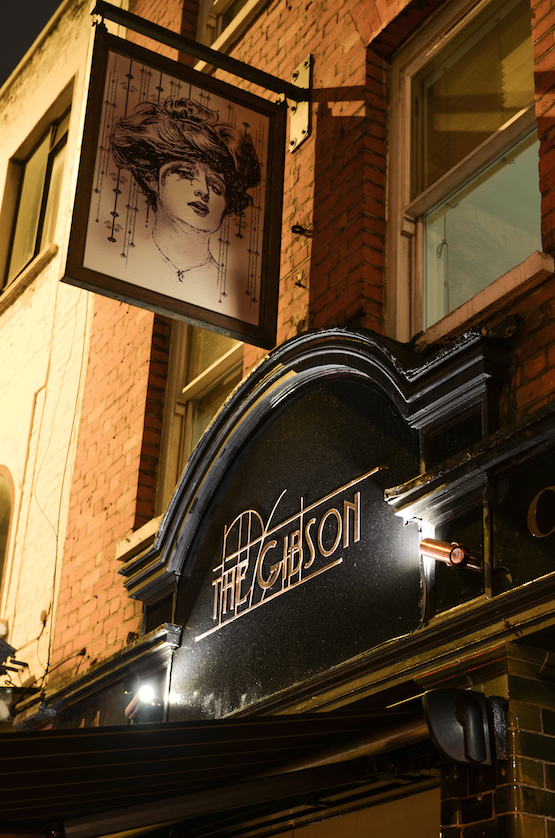 “How about a Gibson?” That’s Cary Grant’s Roger Thornhill in the iconic Hitchcock thriller North by Northwest. A nod to the director – who we can assume enjoyed this cocktail; he famously took its sibling, the Martini, “five parts gin and a quick glance at a bottle of vermouth” – is a strong start to the menu at Marian Beke’s long awaited London opening dedicated to the drink of the same name, The Gibson. For those that don’t know the story of the cocktail, that can also be found on the menu’s opening page: the Martini was “improved” upon by Players Club bartender Charles Connelly at the request of famed artist Charles Dana Gibson. Connelly’s cocktail swapped the olive for a pickled onion and with that a legend was born. Fast forward a century and Connelly’s cocktail is the focus of Beke’s first venue of his very own, in an East End pub that dates back to the tail end of Victorian London.

So why the Gibson in particular? The Slovakian bar star wanted a gin cocktail to channel the local spirit, but decided an ode to the Gibson was much more interesting for a city already awash with martinis from dry to dirty. Thus it came to be the cornerstone of his menu. And what a menu it is: quite literally a work of art. Polymath Helen Calle-Lin, who also updated the interior of the 125-year-old venue, has taken the illustrations of the artist for whom the drink was named and weaved them into a fascinating “flavour map”. In truth, it is part map, part calendar and part time machine. Guests navigate the menu using the months as signposts, where they will find either ingredients that are in season or the type of drinks that are often consumed at that particular time of year. “January, for example, will contain more brown spirits and spices,” explains Beke, so you’ll find the Custard Apple Pie mix of Ron Zacapa 23, guanabana juice, orange and carrot flapjack brew, pineapple chutney, lime juice, coconut sap and lemon peppa crusta. Similarly, June and July tend to “lighter, fresher, more summery” offerings, he says, such as June’s Breakfast in Hollywood (Gin Mare infused with holy wood, Moet & Chandon brut imperial, patchouli leaves, fresh mint, lime, tea bitters crusta) or July’s Tiger Balm (Don Julio blanco tequila, chilli liqueur, diamond lime, grapefruit, agave syrup, fresh turmeric, date and tamarind chutney, lemon balm). Guests aren’t confined by the calendar, however; all drinks are available year round.

Somewhat cryptically each month is titled with its Anglo-Saxon name. But as a concession to those customers that can’t read Old English, Beke has also added a corresponding story from the cocktail world to help guests get their bearings. This is where the menu really comes into its own, bringing history alive. March drops guests in 1908, as they disembark a ship that has taken many months to reach the shores of Japan. “Martin”, the Grand Hotel Yokohama’s head guest porter, is there to greet us and handle customs so we can get a hard-earned stiff drink made by Louis Eppinger. Conjuring the time of Around The World in 80 Days when travel was glamorous and the Far East was more exotic still, this imagery might well put modern day drinkers in the mood for one of Eppinger’s legendary libations. They’ll find the Bamboo No2, an upgrade on his original Bamboo, at the top of the March list, which is rounded out by other house creations pushing East Asian flavours. The Grand Orient Express stars smoked lychee Glenfiddich 12, fresh galangal and Korean bulgogi marinade among its ingredients, while the Way of the Dragon features mango and longan juice and the Big In Japan’s combination of Hakushu whisky, yuzu vinegar, royal jelly and rice syrup, grilled rice powder, pickled pink ginger and ginseng plum wine all do their bits for East-West relations.

The menu’s historical focus allows for The Gibson to riff on the recipes of cocktail pioneers such as the aforementioned Eppinger, Tim Daly, William Boothby and Ernest Rawling. And it also acts as a springboard for Beke and bar manager Rastislav “Rusty” Cerven to enjoy themselves. Nothing from the past appears off limits as a source of inspiration. The Holy Grail? Check April’s cocktail of the same name. Spaghetti Westerns? May is made merry with Tatanka’s Smoke!, West of Eastwood and The Ponderosa, which has a lamb jerky infused Knob Creek rye base and pickled mint. Literary libation lover Ernest Hemingway? See July’s Pickled Banana Daiquiri and the popping candy of The Great Japito. It’s almost as if the history lesson is just an excuse to indulge themselves. How else can you describe celebrating August 21, 1740, the day when the British Navy introduced grog, with the nitro banana-washed Bacardi Heritage of The Gibson Milk Punch, or the month’s other ingredients that take in all the corners that the Empire’s sailors were blown into?

Modern techniques and exotic on-trend ingredients from around the world – kvas, tonka beans, propolis – yank historic cocktails into the present day. The presence of pickles in every drink, a kitchen technique increasingly en vogue over the last decade thanks to New Nordic cuisine, is their upgrade of the lowly pickled onion of the original Gibson. Indeed, Beke’s belief that “there is more potential for pickles in bars” was another reason he picked the Martini’s lesser-known brother as his muse. He compares pickles to the recent resurrection and increasing popularity of shrubs, and rattles off the number of pickling styles – verjus, chutneys, relishes, ketchups and brines – all of which feature. “Imagine how much classic mango puree you need per drink. Well, mango chutney won’t go off so easily, and you only need one barspoonful to bring a drink spice, complexity and acidity.” But Beke has brought more than pickles from the kitchen cupboard to his cocktails. October’s Gibson Bloody Mary (lobster stock, green tomato chutney, smoked pesto, pickled horseradish, kimchi, roasted veggie juice, mushroom ketchup), November’s Monkey Kong (including coffee style roasted edamame) and December’s Nether Say Nether (featuring a hot Dutch waffle) all put food front and centre. The icing on the cake, though, is the Minc’d Pye, a Christmassy concoction containing minced meat cooked in dark beer. It’s an ambitious, high-concept menu, but Beke and his team are clearly having fun playing with the past. And with cocktails priced no higher than GBP11 (¥103) guests can join in. Of all the gin joints in all the towns in the world, how can you not want to walk into the one that has a drink called the Tiki Toffee Pudding?

22 tips for sweet-talking your guests