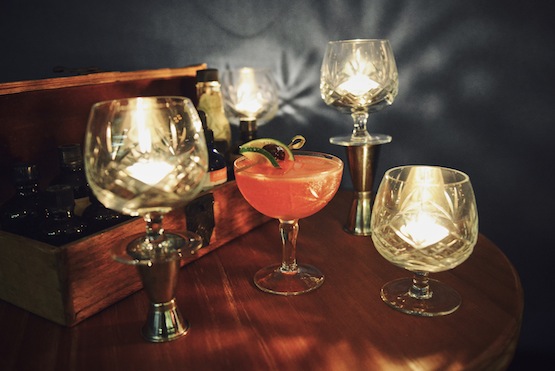 “First thing, the name: the “union” part refers to what I hope the bar will become – a gathering of all kinds of people from different backgrounds. The “trading company” part pays homage to the mid-19th-century California Gold Rush, a time in US history when railroads had just opened and people set off in search of gold – Jerry Thomas, the father of American bartending, was one of them. Many of the railroad companies at the time called themselves ‘Trading Co.’ – so our name is inspired by that era. But this is not a speakeasy, it’s not a whisky bar, it’s not a cigar bar – it’s a simple American-style cocktail bar with great food. The bar is part owned by Austin Hu, the chef-founder of Madison, so it’s a reflection of both our talents and what we feel a bar should be. Which is to say that it’s not just about the drinks. To my mind, a bar is somewhere you go for fun and happiness – cocktails are just one carrier in the process of creating that happiness; service and atmosphere counts, too. That’s our ambition: every guest leaves happier than when they arrived.

Our menu is big – all told, around 120 cocktails. Around ten of them will be seasonal craft cocktails based on a certain theme. Right now, I’m planning a “Houston Bartender Series” – basically, a list of ace recipes from my bartender friends back home in Texas. We’ve also got five aged cocktails rested in new-roast sherry casks. Then, maybe five or so punches. So that leaves around 100 classics. The idea was to try to educate our guests in cocktail culture. So, around 80 per cent of the classics on the menu you can’t find anywhere else in Shanghai. Say, the Pendennis Club Cocktail [Old Tom Gin, apricot brandy, Peychaud’s bitters and lime juice]. Still, we were quite selective: in fact, it took us months of digging through old cocktail books to find recipes that would work on a modern palate. We’ve put the source of each drink on the menu, too, a kind of salute to the forefathers of our trade. We’ve also introduced a loyalty program: we offer every guest a card, every time they try a classic, we stamp the card; when they hit 100, they get a special gift, a crystal glass, or cocktail-making lessons, maybe.

Recently, a lot of my bartender friends in Shanghai are opening their own places. I like how the industry is growing. When you have so many quality bars popping up, standards get higher, we get more attention from people, and the industry gets stronger. I want to develop a stronger sense of community within the bar community here, though. Strong co-operation between bars is a trait of any good cocktail city. Overly competitive bartenders just undermine the industry.

10 things every bartender needs to know about pastis