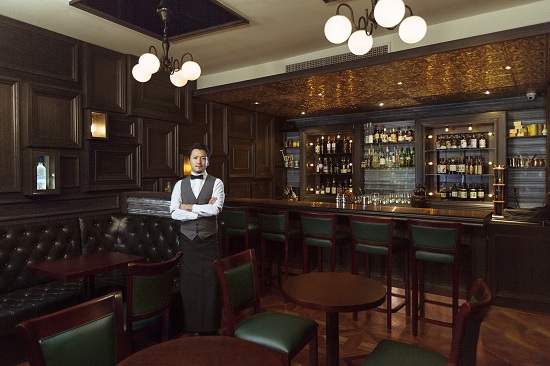 “Why did I open a bar in Shanghai? It’s quite simple, actually. I’m someone that follows my feelings. One day, in New York, I thought, ‘If I’m ever going to open a bar, it’s going to be in Shanghai’. Even though I’d never been here before. I had the same kind of impulse before I moved to New York in 2006. So now, with the help of co-founder Gordon Zhang, the dream is reality. An important part of my career has developed at Angel’s Share, so it’s natural that my own first bar follows a similar concept. But I didn’t just want to do another paean to Prohibition. So it’s a kind of “triple-tier” speakeasy – three different bars set over different floors. Imagine each level as economy, business and first class.

On the ground floor is Ocho – a boutique supply store for the bar industry. Also on that level is the smoking room. In New York, you can’t smoke in bars. That’s something I wanted to bring here. I want the cocktails to be a sensory experience – taste, of course, but aroma, too. Cigarette smoke kills that to some extent. But I knew that would be a challenge in Shanghai. So the smoking room was the compromise. Up the stairs is the first of two main service bars: both are distinct and offer completely different cocktail programs. The lower bar has a kind of downtown New York feel – the kind of place you’d find in the East Village or Brooklyn. With a copper bar top, and floral-print ceiling, there are 20 seats but enough space for 30 or 35 people – at weekends we take out the chairs and it becomes an up-tempo, fast-service bar with around 20 drinks on the menu, straight serves, limited glassware and basic garnishes.

The second bar is slower paced and probably a bit more refined. I’d say it’s probably closer to London in style than the lower-tier bar. Downstairs, the drinks are mainly rye-, bourbon-, or rum-based; here it’s more scotch, Japanese whisky and small-batch spirits. We offer 24 non-classic cocktails in more elaborate vessels and progressive garnishes and serves. I’ve included Speak Low – my winning cocktail in the Bacardi Legacy Cocktail Competition 2012. It’s the namesake drink of the bar, of course, but I tell my team just to treat it like any other drink – it’s not supposed to be the signature drink or in any way thought of as the best cocktail. It’s quite a niche drink, with a challenging profile, so I say to the team, ‘Don’t push this drink over any others.’ Besides the menu, they’ll be a different tempo of music: upstairs jazz, downstairs blues, or early rock. Bartenders downstairs wear aprons, upstairs in shirts and vests. Price points are different, too: ¥70, downstairs, around ¥100 upstairs.

Level four is members’ only – we’re still working on a membership policy. I see this space as more Parisian. There’s a chandelier, a piano, pianist, and wooden units on the wall to display rare, high-end cognac, armagnac and whisky. They’re for sale and, in the Japanese tradition, guests can leave unfinished bottles here. It’s a low-key space for VIPs and guests who want privacy.

I built the drinks list and trained the staff but, no, I won’t be moving to Shanghai full-time. I’ll be here once a month, splitting my time between Shanghai and New York. I intend to open another bar, though – I have so many ideas for new places. But where, yet, I don’t know. I’ll follow my feelings.”