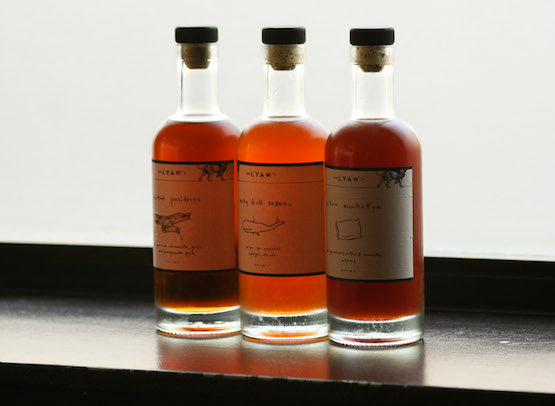 No citrus, no ice, no brands – a boundary-shifting new opening in London has overturned some of the most trusted conventions of the bar.  DRiNK speaks to founder Ryan Chetiyawardana and asks, why?

Ryan Chetiyawardana has been involved in some of the most successful bars of the past ten years. The Bramble in Edinburgh, Worship Street Whistling Shop and 69 Colebrook Row in London and, more recently, Henry, A Liquor Bar, in New York. But this year sees the opening of his first solo project. A radical re-write of the rulebook, Chetiyawardana’s White Lyan has re-assessed some of the basic norms of bartending. No citrus, no ice, no shaking or stirring, and very few drinks brands on display. Instead, using their own re-distilled spirits, all cocktails are pre-batched, bottled and refrigerated. Serving a cocktail at White Lyan is essentially as straightforward as, say, opening a bottle of beer and placing it on the bar. “The basis of the concept was control,” explains Chetiyawardana, via email. “Having looked after a few different cocktail programmes, I was frustrated with what was outside of my control. By stripping all the way back, I could make sure the drinks were exactly how I wanted them. We literally went back to step one and built everything up the way we wanted it.”

Fine. But why no citrus? “Again, the motivation is control,” he explains. “Ice and citrus are wonderful ingredients but they’re often hard to manage. Ice varies in term of quality but, moreover, it tastes awful!” Dilution makes up to 25 per cent of a cocktail, he adds, and, if it doesn’t taste good, can really throw the balance of a cocktail. “The same goes for citrus fruit,” he continues. “In the UK it varies so much: cost, size, flavour. One week it might be sweet and juicy with no flavour, the next it will have little aroma, the next it might be bitter,” he says. “By removing these variables I could ensure consistency and make sure the drinks could be served in a specific manner – quickly.”

The other principle of the concept is attached to service. “I wanted to introduce more people to cocktails,” says Chetiyawardana. “Many of my friends are not in the industry and are put off by the cocktail bar vibe: imposed rules, the sense of snobbery, the cost and time it takes to make a cocktail.” The service at White Lyan is quick, “but welcoming,” adds Chetiyawardana. “I wanted people coming to the bar to feel relaxed. Not feel like they had to be part of a stuffy cocktail bar environment. I wanted to create a space where we [bartenders] could spend more time with our guests to make sure they ended up with a drink properly suited to their mood.”

The menu does not abandon the classics entirely. The tradition of riffing staple recipes continues in the Layered Negroni, Moby Dick Sazerac and Painted Presidente. Elsewhere there’s an emphasis on treatments of non-mixed drinks. A note under the listing of the Hobo Czech Craft Lager, for example, says, “Ask for hop atomisation if you prefer a pale ale.” Beneath the glass of house red wine, “Ask for spice distillate if you prefer a little extra depth”. Elsewhere, drinks centre on carefully sourced or precisely refined ingredients. The Bone Dry Martini is made from Mr Lyan vodka and “bone” – a tincture made from roasted chicken bones dissolved in phosphoric acid and mineral salts. “Our vodka is soft with a clean cereal bite,” says Chetiyawardana. “What I wanted to do was lengthen the spice, and give a dry, clean note. The bone tincture gives a flinty-soft heart to the drink, with an extreme dryness.”

Naturally, the bar has had its detractors. Not entirely surprising, perhaps, given White Lyan has, in essence, cast doubt over some of the most basic expressions of global bartending. “I was expecting a backlash from the trade,” says Chetiyawardana. “There was certainly some who thought it was a gimmick. But mainly people didn’t know what to expect. They thought the bar wouldn’t be – a bar!” Still, this new customer-forward philosophy, reckons Chetiyawardana, is the basis for a new direction in bartending and White Lyan is his attempt to “start a new dialogue”. “I think there’s been a move towards service- rather than drink-orientation, and a wider focus on ingredients,” he concludes. “I think these things will find new outlets in interesting ways. But I also think there will be much more customer interaction. This has already happened in the restaurant world – so I expect the drinks world won’t be far behind.”