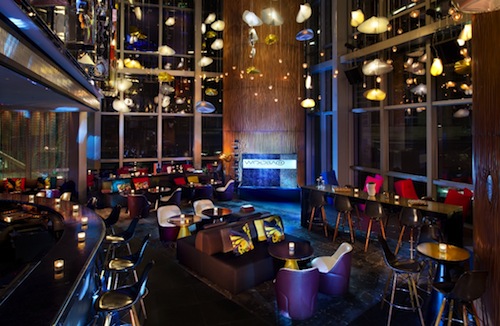 Hotel bar conventions get turned on their heads at the W Hong Kong’s WooBar.

Nestled in the trendsetting W hotel, WooBar is a reinvention of sorts, and one of the first in a rebranding effort for W Hotels worldwide, dedicated to making the W’s bar programme as progressive as the hotel chain has been. According to Simon Cote, director of beverage and food, “The W cocktail culture is a key part of our food and beverage offering. Where most hotels have signature restaurants, for the W, it’s all about a bar with cutting edge music and exhibits alongside the best cocktails and spirits.” Cote’s job title, a cheeky reversal of the norm, sums up their priorities.

The space previously occupied by “The Living Room,” has been rethought and redesigned to focus on approachable, inventive drinks. It’s an ambitious debut, with a menu divided between classics, reinventions and experiments. Forgotten recipes and their origins cover the first page, providing a good introduction to novice drinkers without being preachy. It’s supposed to be fun, and it is. While many hotel bars focus on pushing the envelope or doing straight classics as accurately as possible, WooBar cuts a path somewhere in the middle, and seems focused on bringing modern drinking to less-experienced cocktailians in a fun and stress-free way.

“Molecular is fun,” says bar manager Joe Villanueva, “but it’s important to be able to make drinks quickly and consistently. So we don’t do all molecular stuff, and we try to keep the touches as simple as possible.” By not being a slave to the past, nor tied to a possible future, WooBar is an update of what the 21st century hotel bar can and should be.