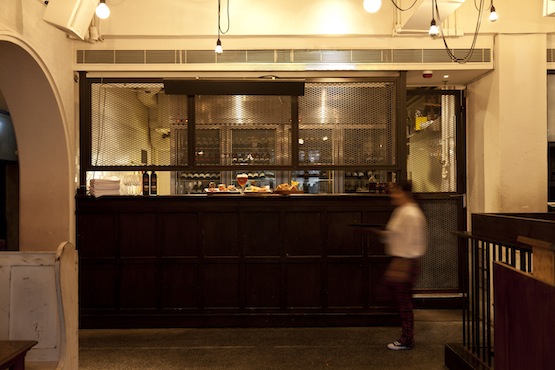 Hong Kong’s British and Chinese heritages come together in an old pawn shop.

The first images of Hong Kong someone from the west usually conjures up are fairly universal – led by Suzy Wong, Chinese junk boats, the harbour and endless rows of neon signs. Perhaps the most iconic of these signs is the prolific design for the pawn broker: a circle, a crown, and the character for “deposit”. It is a symbol seemingly as old as the city itself, and a unique image for a city built from two very different cultures.

Opened in 2008 by the ThePressGroup, The Pawn is a celebration of that classic mix of British and Chinese cultures unique to the fragrant harbour. Occupying the top two floors and roof terrace of an old Wan Chai pawn shop, and reinventing the classic logo, The Pawn was born as a gastropub in Hong Kong style. Beyond the interior and menu design, it is also a place that feels apart from time, a remnant and a reminder of the glory days.

Since 2010, general manager Anthony Killip – along with group sommelier Kevita Faiella – has taken this gastropub and revitalized the drinks programme, focusing on British classics, inventive cocktails, organic wines, and, especially, the freshest of ingredients. “We get produce from everywhere,” says Killip. “We grow our own mint on the roof, and we also source from a certified organic farm here in Hong Kong as much as possible.”

Managing restaurants and bars in the UK for about a decade, Killip got his start as a glasser at the renowned Haymarket, with Lee Marvin. “It started out as a way to make extra money for uni, but I just fell in love with it,” he explains. From there Killip spearheaded a number of London venues before winding up at Eight, a private members club in London, where he met the owners of ThePressGroup. “We had a meeting in this little café in Battersea, and it just seemed like a great opportunity and idea.” With his background in bars, Killip set to diversifying the cocktail menu and streamlining the beer, to get a very respectable list. Innovative without being too flashy, the drink menu is large but comfortable.

On the wine side, Faiella has created a list solely of organic and biodynamic wines, sourced from all over the world. “That started as an idea, and it became the whole list,” says Faiella. “Sometimes it’s difficult not having someone’s favourite wine, but getting people trying great new wines is good to see.”

What really sets The Pawn apart is the group’s dedication to training, holding weekly masterclasses on food pairing, wine, spirits, cocktails, cigars, coffee and anything else. “It’s great that people have the passion to learn, and to take some of that learning home with them,” Killip says of his team. The staff clearly take to the training well: service may be excellent elsewhere, but rarely do staff have such knowledge of the products they are serving as they do at The Pawn.

Of course, to discuss The Pawn without mentioning the atmosphere is impossible. It’s a cozy place, as inviting for an afternoon meeting as for happy hour, for snacks on the terrace as a full three-course meal. Like it’s namesake, The Pawn has something for everybody, and if you don’t know what you’re in the mood for, there’s always someone happy to help you decide.