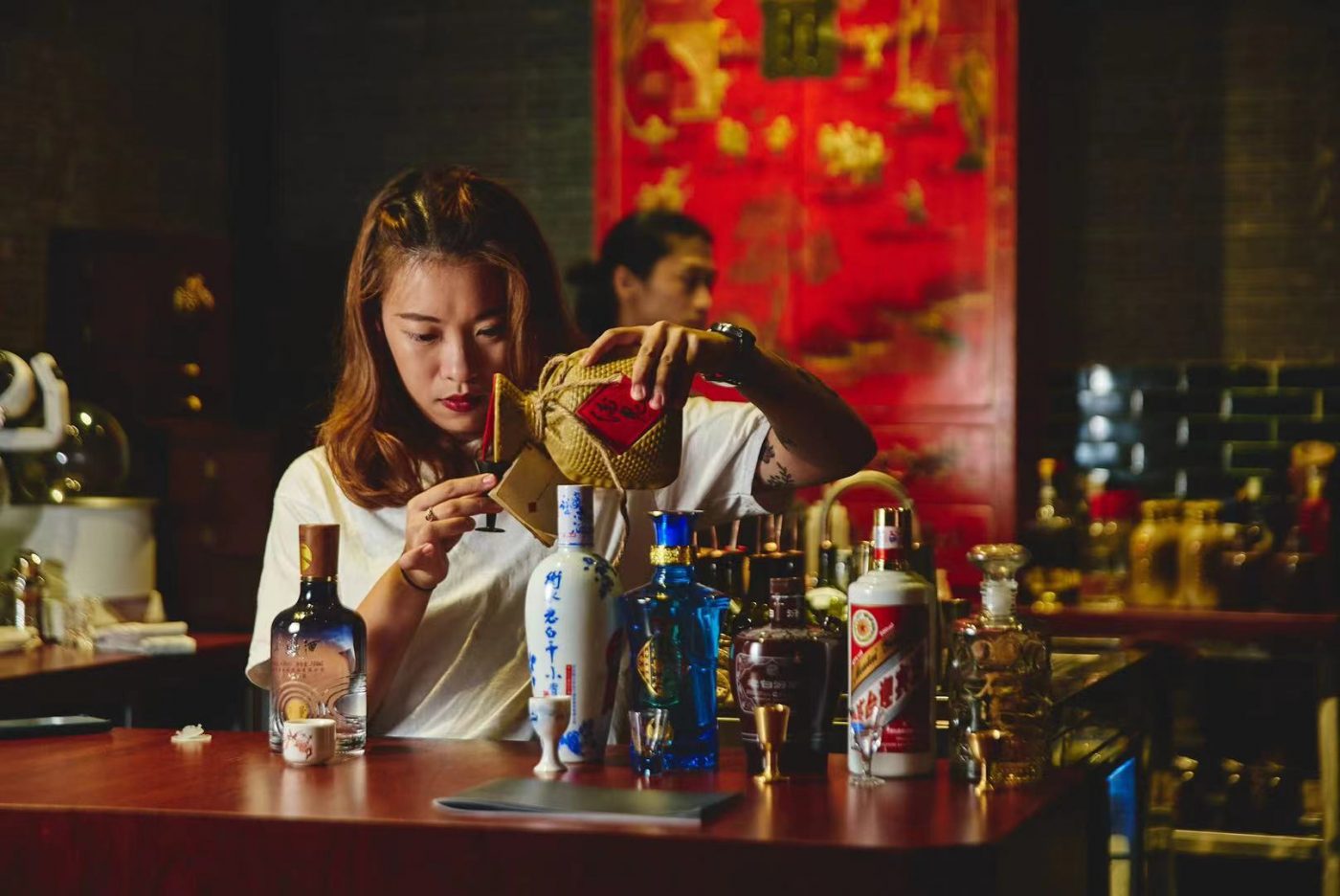 Get to know more about this misunderstood spirit on World Baijiu Day 2021. By Holly Graham.

Bastien Ciocca, Andrew Ho, Marcia Xiao and Amethy Huang – co-founders of The Hope & Sesame Group – own bars across Guangzhou and Shenzhen, including baijiu cocktail bar SanYou. For World Baijiu Day 2021, they explains why the team decided to open the baijiu-forward concept, why it’s one of the most misunderstood and underrated spirits in the world and how to begin exploring this diverse category.

What led you to open SanYou?
SanYou was born as a result of COVID-19. Before January 2020, we were traveling extensively and didn’t plan to open a new venue in Guangzhou. By the end of February, we knew it would be a long time before we could travel again, and that we would have a lot more time in the city. At the same time, there was a lot of pride within the Chinese community regarding how people helped each other and the country when tackling the virus. We thought it would be a great time to finally give baijiu the cocktail bar it deserves and share a new angle of this rather unknown spirit to younger Chinese drinkers.

Ever since our early Hope & Sesame days to our recent expansion into Charlie’s, we have always been fascinated by the chase and the thrill of sourcing rare, high quality and boutique spirits from all around the world. We would drive three hours in Australia from Perth to Margaret River just to visit a gin distillery or go to the oldest bodega in the streets of Madrid to look for that vintage bottle of sherry, but what have we done in the country we call home – China?

This is another reason why we have set our sails on this quest to uncover and popularise baijiu, the ancient white spirit that has commonly featured on dining tables or drinking establishments all over China for the past 700 years – ever since the Ming Dynasty.

Do you see a future in popularising baijiu?
With over 10,000 brands of baijiu in the market, the world’s best-selling white spirit has a whole new chapter to be written in modern day cocktail culture, and our vision is merely to be a cog in this movement. There is a lot of education and work needed before it gets to the level of say, mezcal, but it definitely deserves a lot of attention.

How do you encourage both your guests and fellow bar industry to try it?
You need to be honest with people and let them know that they may or may not like it – much like amaro and peated whisky. But we encourage them to try a few before making up their mind as it’s not a singular product but rather a wide category with spirits made across a country the size of Europe.

How do you educate drinkers when it comes to baijiu?
A lot of bartenders are still scared when they hear the B word! Baijiu is difficult for many people to understand. But if you actually gather a diverse selection and do a tasting of the 12 aromas of baijiu at the same time, it will blow your mind on how diverse and interesting it becomes. People will start to naturally think of what cocktails they can create with each style. The 12 aromas are: Strong; mixed; light; rice; sesame; savour; medicinal; extra strong; te; Xifeng; fat/bean paste and Laobaigan.

A guide to aromas

Light aroma: Made with “qu” from wheat, barley or peas, this fermented sorghum delight is one of the most palatable baijiu out there. It is usually dry and smooth and often with a pleasant floral nose. The most famous baijiu in this category is Fenjiu from Shanxi province and Erguotou from Beijing.

Savoury aroma (Also called soy sauce aroma): This category needs no or little introduction as signature brand Maotai flies this aroma’s flag high. The name was given due to the soy sauce or fermented bean paste flavour it possesses, making this type of baijiu very popular on the dining table pairing with flavourful Chinese cuisines. The savoury aroma derives from sorghum being repeatedly fermented, developing ester compounds which are responsible for this umami-like flavour.

Strong aroma: This aroma, the largest in China, has been popularised by distilleries based in Sichuan province, and is famous for the fermentation of sorghum and other grains in ancient mud pits, which creates a generous amount of ester compounds. This style of baijiu is known for its dangerously smooth and balanced texture, with a long-lasting mouthfeel and lot’s of tropical flavours. Jiannanchun together with SheDe and Luzhou Laojiao proudly represent this category and especially the latter, which has pioneered baijiu culture in Europe and America.

Rice aroma: As this aroma’s name suggests, rice is the main ingredient together with small qu which is fermented in a half-solid state and distilled and diluted to 35% abv or above, separating itself from rice wine which is generally between 12-18% abv. The honey-like flavour of the baijiu comes mostly from lactic acid and is often described as one of the most elegant baijiu. Sanhua from Guilin is recognised as the powerhouse of this category. A funny side story is that long ago, a man named DuKang was a deadbeat government minion in charge of the rice storage. Obviously, he wasn’t very good at his job because one day his store became damp and rice started to ferment, and like any good ancient Chinese myths, it skips all the fun parts and DuKang became the one who invented alcohol. How convenient!

Bean paste aroma (or fat aroma): A rice-based baijiu aged in clay tanks with a massive slab of pork belly! It is often said that Guangzhou is the capital of food in China and Chentaiji is a distillery based in Foshan, Guangzhou, where they invented this fat washing method 700 years ago to add extra flavour and texture to the baijiu. Of course its main purpose is actually to purify the liquid, with the fat absorbing all the impurities, a little like how the French use minced meat to clarify consommé.

Extra strong aroma: Often a combination of big and small qu, this baijiu is distilled by Jiugui distillery in Hunan using sorghum, rice, glutinous rice, wheat and corn. It is often said that extra strong aroma baijiu is a combination of the savoury, light and strong aromas, making it a very complex and unique baijiu that is aged for a minimum of three years. It’s full of ester compounds, a lot more than in any other spirits made in the world and you may hate it at first but once getting familiar to the almost “horses under the rain” nose, you will probably love it the most.

Medicinal aroma: When speaking about medicinal aroma baijiu we must talk about Dongjiu distillery. Dongjiu basically represents the entire category and the method of production is very unique. The baijiu is a combination of big qu which gives the spirit a strong fragrant aroma, small qu which adds softness and a sweet after-taste and 130 different types of Chinese herbs and juice, hence the name. It’s kind of like a Chinese amaro.

Sesame aroma: Being the youngest of all the aromas, sesame aroma is often considered as the royalty of all baijiu, mainly due to the delicate and high standards in production process. The flavour is also in between the three main baijiu aromas – light, savoury and strong – and is made with sorghum, millet or barley fermented in stone pits. Although no actual sesame is added to the distillation process, because its production method is proximate to the savoury aroma, it gains that nutty and sesame flavour. This baijiu ferments at much higher temperatures but for a shorter time compared to others.

Si Te aroma: This baijiu is steamed and fermented with whole grain rice, giving the spirit a mild body, an elegant nose and a smooth and long finish on the palate. Si Te distillery can be identified as the pioneer of this category of baijiu with a common taste more towards citrus and mineral. It’s an awesome baijiu for elegant cocktails.

Mixed aroma: Essentially a blend of two or more different types of baijiu. What to look for in a good quality mixed aroma baijiu is the intense aroma of a savoury baijiu which adds body to the spirit, together with a clean and sweet finishing on the palate.

Xifeng aroma: The Xifeng distillery is a 3000-year-old distillery and it is so famous, and the style of baijiu so unique that they named an aroma after them! This sorghum-based baijiu uses qu that is made from barley or pea husks, fermented in mud pits no longer than one year using old boat rope and baskets that had been used at sea for a long period of time, collecting a lot of salt. The characteristic of this baijiu is that it’s very fresh without being too mild, contains aromas of fruits and a long and smooth finish.

Laobaigan: Sometimes considered the equivalent of a very strong vodka as they only use wheat. They are similar to light aroma baijiu in the production process, however. Many brands are stronger in alcohol than the norm with abv around 60 to 78%.

What’s the most common misconception about baijiu?
The most common misconception is that you don’t like baijiu! It’s a category, not a single bottle or brand. Some baijiu get very close to vodka in flavour and nose, whereas some have a lot of funky tropical fruits coming from the long fermentation process, similar to Jamaican rums. Some even taste like a sesame eau de vie. It’s a category that’s a lot more interesting than people think. 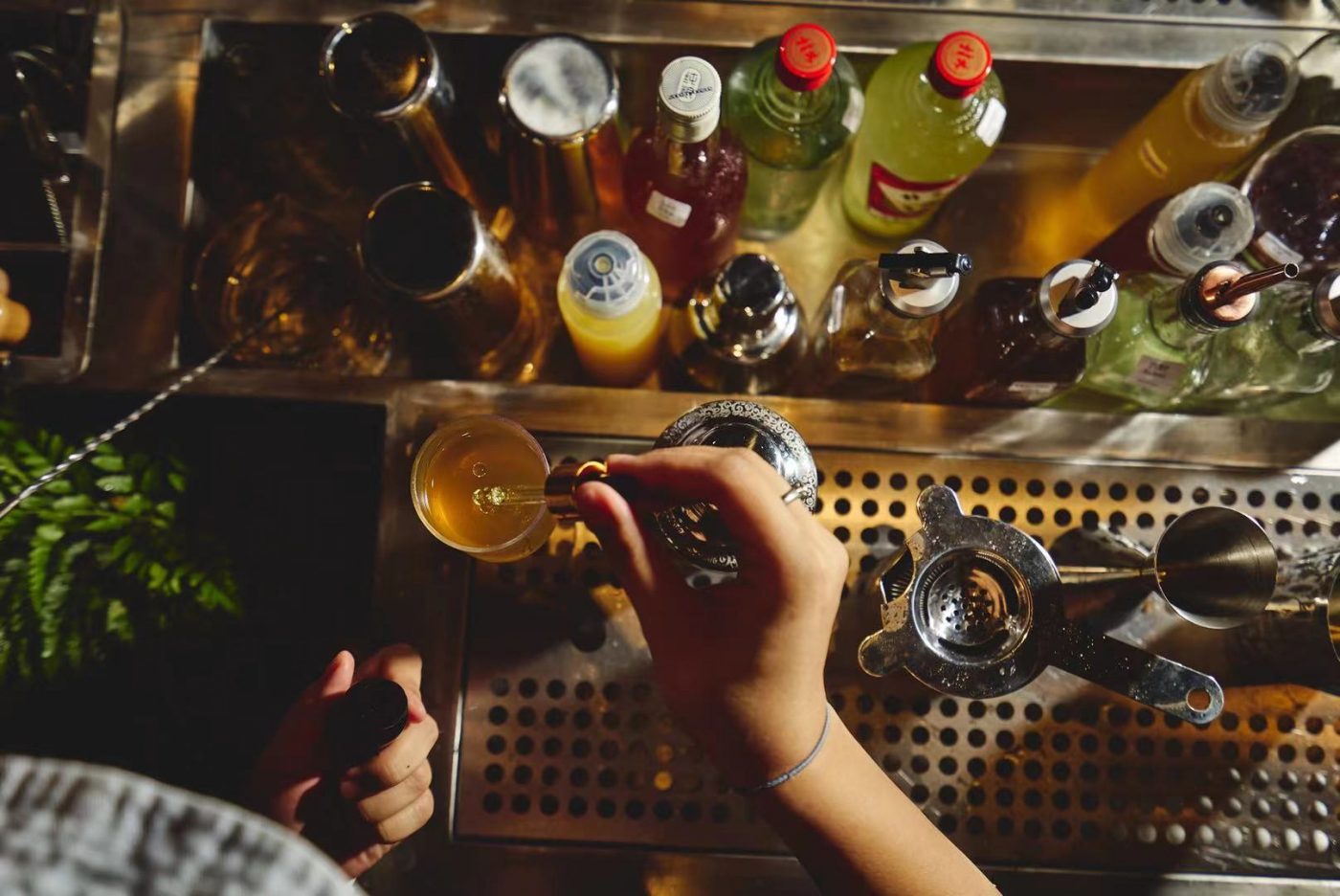 How do you incorporate it in your cocktail programme? What’s your tips for bartenders wanting to start experimenting with it?
We focussed on each category of baijiu and created 12 cocktails – one for each different baijiu aroma. When using Moutai in cocktails, the unique and rich savory aroma will give the liquor a roasted and burnt sensation, which complements the flavour of thicker ingredients such as dark chocolate very well. Luzhou Laojiao – a strong aroma baijiu – has a sweeter body and lots of ripe fruit flavours, so is super interesting in tiki styles cocktails. Light aroma Fenjiu is clean and somehow simpler to work with, pairing well with a lot of floral and pear flavours.

Sesame aroma is a lesser known category and is really interesting in sour style cocktails. Yubingshao is a fat/bean paste aroma from Foshan, Guangzhou that uses a unique fat washing process, and goes very well with woody ingredients. Some more modern baijiu such as JiangXiaoBai – with a more clean and neutral taste – works in place of vodka and gins. JiangXiaoBai is a light aroma baijiu but it could be its own 13th category of modern baijiu as it doesn’t fall quite exactly in the original 12 styles. It’s light in abv and a less strong flavour wise compared to other, more traditional baijiu.

What are some of your favourite bottles for sipping and mixing?
Sipping wise, lots of strong aroma baijiu in the seven to ten years range is great, then I try to open bottles from across different provinces lesser known for their baijiu as they have a lot of surprises to offer.

When it comes to mixing, It’s a great start to have a light aroma baijiu – Fenjiu is perfect – one strong aroma like Luzhoulaojiu, something very clean like JiangXiaoBai that works great with many infusions and something else more adventurous like Yubingshao.

For mixing, we stay away from cheap baijiu as it would be very obvious in the cocktail served. It’s usually more expensive to make baijiu cocktails when compared to gin and vodka cocktails, but when understanding the amount of work behind baijiu making, it makes sense.