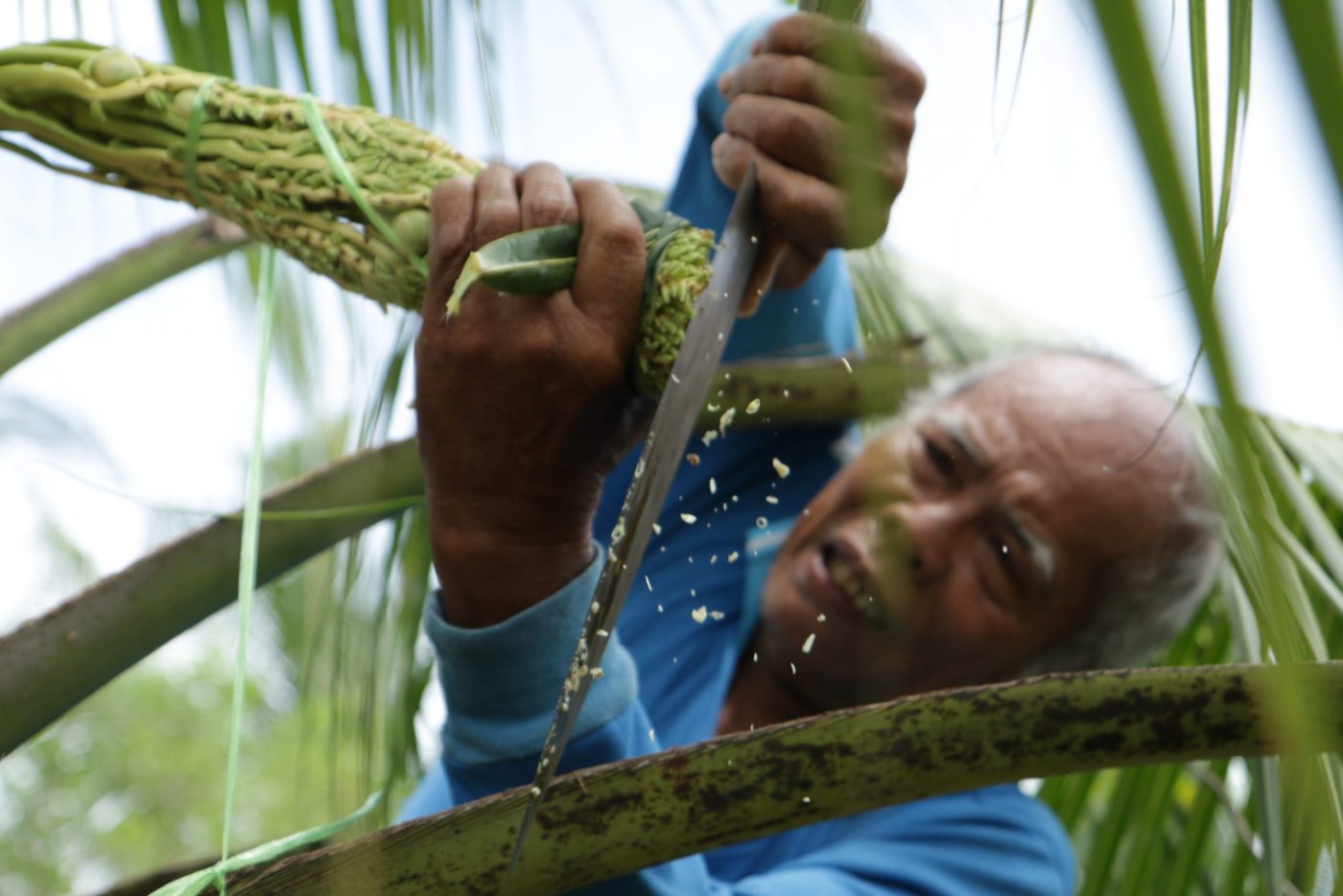 Bartenders and drinkers are accustomed to classic alcoholic beverages and new brands that pop up now and then, but there are numerous local beverages that have yet to be discovered or are disappearing without locals knowing about them.

Coconut sugar is widely produced in Asia, and in Thailand there’s a beverage that coconut farmers refer to as nam tarn mao, which translates to drunken sugar. It’s a wine that is one of the by-products of making coconut sugar, and unless you’re a local who lives in the area, not many have had a chance to try it. 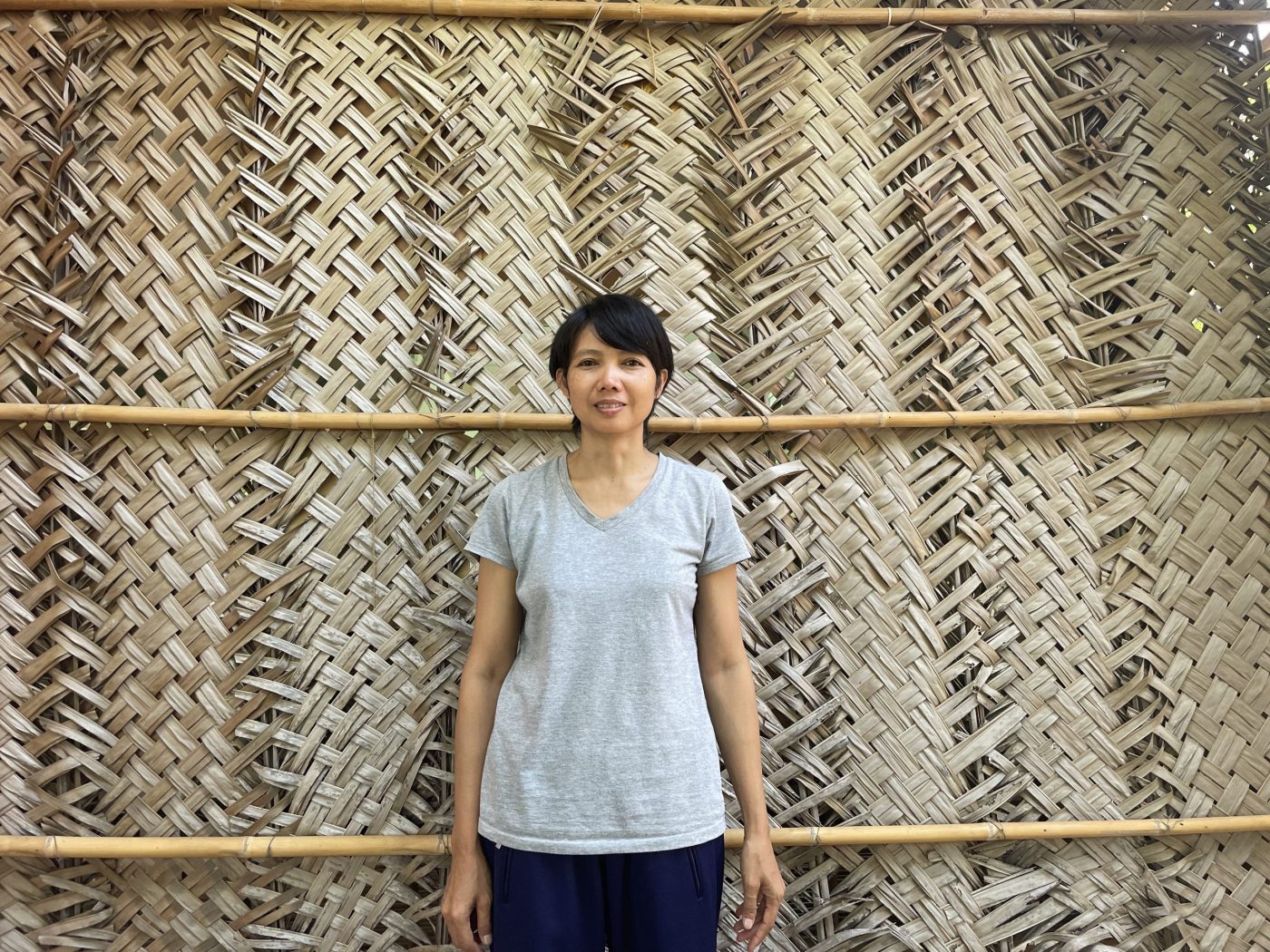 On a scorching day that would soon be followed by rain for days, I drove to Samut Songkhram province in Thailand’s central plain region to learn more about drunken sugar from one of my farmer friends Siriwan “Kae” Prawatroi. She runs a community based social enterprise called Plean Yod Tarn, meaning perseverance for each drop of fresh coconut nectar. Kae’s family farm has been growing organically for generations and is now the only organic farm in the Nang Ta Khian district. She continues this traditional way of living and growing, resilient to the present. We walked to the back of her house into a pleasant green space. Every visit always uncovers something new for me to learn.

The coconut farm is lush with a diversity of plants. There are three kinds of coconut grown at the farm: Ma prao nam hom, meaning fragrant juice coconut, known for its juice and slow grow time; ma prao gang, or curry coconut, known for its coconut milk which grows twice as fast; and the local coconut, which is mainly used to make sugar, but fresh nectar can be collected from all three. The older and taller coconut trees get, the sweeter the nectar, as there’s a higher yield of coconut sugar. Five litres of nectar converts to 1kg of coconut sugar, but just three litres of nectar from decades old coconut trees in nearby districts can also convert to 1kg of coconut sugar. The older, taller trees come with risk of falling as the nectar can still only be collected by humans. The coconut trees at Kae’s are usually about two meters tall so as to reduce the risk of falling when collecting nectar.

Each morning they start around 7am as collecting nectar requires a lot of care and technique. Coconut flowers have to be skilfully bent, precisely cut, and delicately massaged for the fresh nectar to drop into the container hanging underneath. The containers for making coconut sugar will have mai payom or white meranti chips – already smoked and bathed in sunlight – at the bottom as a natural preservation agent, as they prevent the fresh nectar going bad during collection, as this takes seven to eight hours before containers are changed for another round. During the winter, the chips may not be used due to the cool weather.

The containers for fresh nectar to be made into nam tarn sod – fresh sugar or coconut nectar juice – don’t use the chips, as they impart a slight acidity in the nectar. One trunk of blossom can be collected for 20 to 30 days before a new one blooms with their own distinctive flavour profile each season.

Drunken sugar is traditionally made by leaving the fresh nectar in the containers to ferment, with strength dictated by the sun. The containers that have fresh nectar will be separated into two pans – a smaller pan sterilised into coconut nectar juice, and another big one that’s left to stew for hours. The traditional stove is a long line of heat distribution using dried parts of the coconut trees as fuel.

Coconut flower nectar will occur during the stewing at around 75 to 80 Brix and turn a caramel colour. Stewing a few hours longer and using a wooden stick to help stir air into the mixture will assist it forming into coconut flower sugar at about 90 Brix. Usually it’s late afternoon or evening when the process is finished, and the drunken sugar is ready for consumption after a long day as aperitif, believed to be a remedy for digestion and sleep.

There’s one problem though: it’s illegal to make drunken sugar for home consumption.

Why? Thai regulations state that any beverage with more than 0.5% abv will need to be properly registered with a license. And how does Kae produce drunken sugar legally? Regulations allow legal production if the alcohol is produced at a community enterprise with an approved production site that is separated from the residents with a proper water treatment system and located at least 100 meters from a public source of water.

For the case of Samut Songkhram, the province is right on the gulf of Thailand and is known for the Mae Klong river that flows through where people used to commute by boat in the past. The river branches out into smaller canals which are often a source of water for ditches in the farm. There are other criteria that make it very difficult for small farmers or locals to produce their own alcoholic beverages. On top of that, small scale farmers don’t have that much to invest in the required infrastructure. Most of these farmers aren’t making drunken sugar to sell, but just cut a bit from the collected fresh nectar for a sip at the end of a long day.

Kae has found a way to keep the nectarous legacy of drunken sugar alive without breaking the law. She has a friend who is an expert in microorganisms with a wide range of collections. After many trials, she finally settled on a water kefir to help recreate drunken sugar, which keeps the alcohol content below 0.5% and has been approved by local elders – who say it tastes the same.

Kae says using a particular lab tested culture means she knows exactly what goes in it and allows it to have controllable alcohol content, compared to the traditional ways of making drunken sugar that simply let the sun decide the booziness of the fresh nectar. Plus, the water kefir is long life as long as it’s fed with sugar and can be frozen and revived later.

All Kae needs to do is sterilise freshly collected fresh nectar into coconut nectar juice in the morning, add water kefir grains, let it sit at room temperature in a closed container, and the drunken sugar is ready before midday. And indeed it does taste very much like traditional drunken sugar. The fragrance of coconut flower nectar is full and long with a toastiness but not cloying. Think coconut juice with caramel and the roundness rolling flavour – similar to that of a clarified milk punch but with very minimal sourness.

As we sip the drunken sugar and coconut juice, we discuss the environmental and cultural side of this farm. Kae grew up in a time where things were easily grown without issues and without invasive species. She witnessed the land sinking and freshwater in the ditches being replaced with saltier water due to the rising sea level throughout the years.

Kae is still organic farming and doesn’t add colours and preservatives into her coconut sugar. She credits a lot of this to the fact she saw a lot of her parents’ friends fall ill or pass away from the side effects of pesticide and chemical usage in agriculture that was booming when she was a child. It was also what led many of her parents’ friends to encourage their children to pursue other careers over agriculture. Decades later, the area may still look like vast coconut farms but most of the people who live here are elderly and all the tools of coconut production are left as relics. Some of the people who grow coconuts are still a firm believer in chemicals.

People in the area didn’t believe in organic farming until 2014. That year the coconut black headed caterpillar took down other coconut farms except Kae’s. That’s how some people in the area came to learn scientific approaches that are still strongly connected with nature. From composting to beekeeping, there are lots of bees helping with pollination and the coconut flower honey – the latter of which tastes amazing. Kae also taught other farms how to grow Bracon wasps to deal with black headed caterpillars. Among the many things Kae practices, most people are still transitioning and learning from her. Some no longer grow coconut but participate in activities that contribute back to farming.

This has led to the establishment of her community based enterprise that aims to encourage locals to adopt farming again. The purpose of Plean Yod Tarn is to show that it is possible for people to live sustainably as farmers with a stable income and the legacy can be passed to their children and younger generations when there’s a feasible system. At the same time, it’s a learning centre for everyone – Kae has welcomed farmers from around the country that have taken back knowledge acquired from her to their farms.

As I leave the Plean Yod Tarn community, the nourishingly sweet energy still lingers in me but so does the aftertaste of the uncertain future for coconut sugar production in Nang Ta Khian district. The majority members of Plean Yod Tarn are 70 plus years old. There’s only five active stoves that churn out coconut sugar, and it’s unknown if the younger generation will carry on the tradition or not.

The upside is that Kae and the team of elders has inspired numerous farmers around the country to grow organically and sustainably, and Kae doesn’t plan to give up anytime soon. She has been experimenting with other by-products such as making coconut flower vinegar by scooping out the foam while stewing and letting it ferment slightly over a year which creates value in what is usually thrown away. Another product is coconut molasses, where Kae ages coconut sugar for years resulting in even more complex tasting notes.

With the state in quasi prohibition and the direction the alcohol laws are heading in Thailand, one can only wonder what other local spirits are out there that may be disappearing.

Everyone likes baijiu, you just don’t know it yet