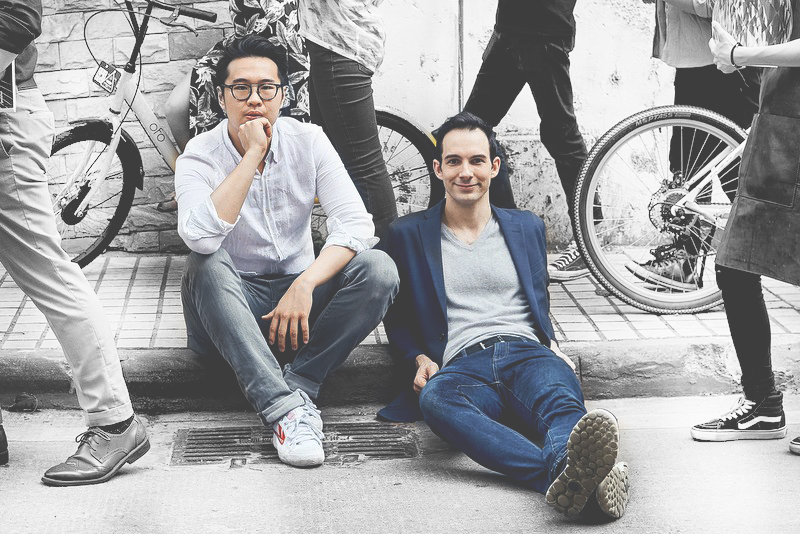 We were on a trip to Hainan and the chef from the Ritz-Carlton took us to visit some farms, one of which grows yellow chillies; known as the yellow lantern or yellow emperor chilli. You can only find it in Hainan – it looks like a little pumpkin – bright yellow-orange, it’s very tasty with a passionfruit-like flavour. It actually used to be considered one of the hottest chillies in the world, second only to habanero, before the days of ghost peppers and all these new engineered hybrid chillies. We decided to distil the chillies and found out that they weren’t spicy once distilled – spicy not spicy – and this became the cocktail name. When you distil any pepper, the spiciness doesn’t carry over. Basically, capsaicin molecules – what makes a chilli spicy – are too heavy, so they don’t evaporate when you distil the chillies. The spicy molecules remain in the first flask, and don’t carry over to the second where the other flavours go. But, as we’ve learned, it’s not the same rule for wasabi! Those molecules are much more volatile, and so some stay in the first flask, and some go to the second, meaning you cannot separate the kick from the flavour – but you can with the chilli. So far, this rule stands for every chili we’ve tried.

Spicy Not Spicy is a very fun drink; fresh, herbal and a little floral. We work directly with the farm in Hainan to have the chillies sent to us fresh, which offers the best flavour when redistilled. The peppers can be distilled with the rum in a rotovap, or using a small water distiller. In Hainan, they also have a chilli sauce made with the yellow peppers and vinegar – we also tried distilling with this, but the flavour didn’t have as much of a punch. The drink is truly a rum sour at the base. The rum blend is distilled with the chillies, and from there it is quite simple: yellow Chartreuse, a little chamomile liqueur, a bit of passionfruit, some lime juice, and then aquafaba or egg white – we are using aquafaba more and more these days instead of egg white in our drinks. Then it’s all shaken, and we serve it with a small passionfruit pudding, so you have a bite of these nice and citrusy passionfruit flavours chased by the chilli of the drink.

For those who don’t have a rotovap, the water distiller is so convenient, and quite affordable for anyone – you can buy a HOOLOO brand one on Taobao for about ¥400. When we were traveling around Europe doing guest shifts, we carried it with us, and in each city made a different version of Spicy Not Spicy using a local pepper. It made the drink quite unique and personal to each place, with new flavours each time.

Recipe (Click to view)
Spicy Not Spicy by Hope & Sesame

Spicy Not Spicy By Hope & Sesame