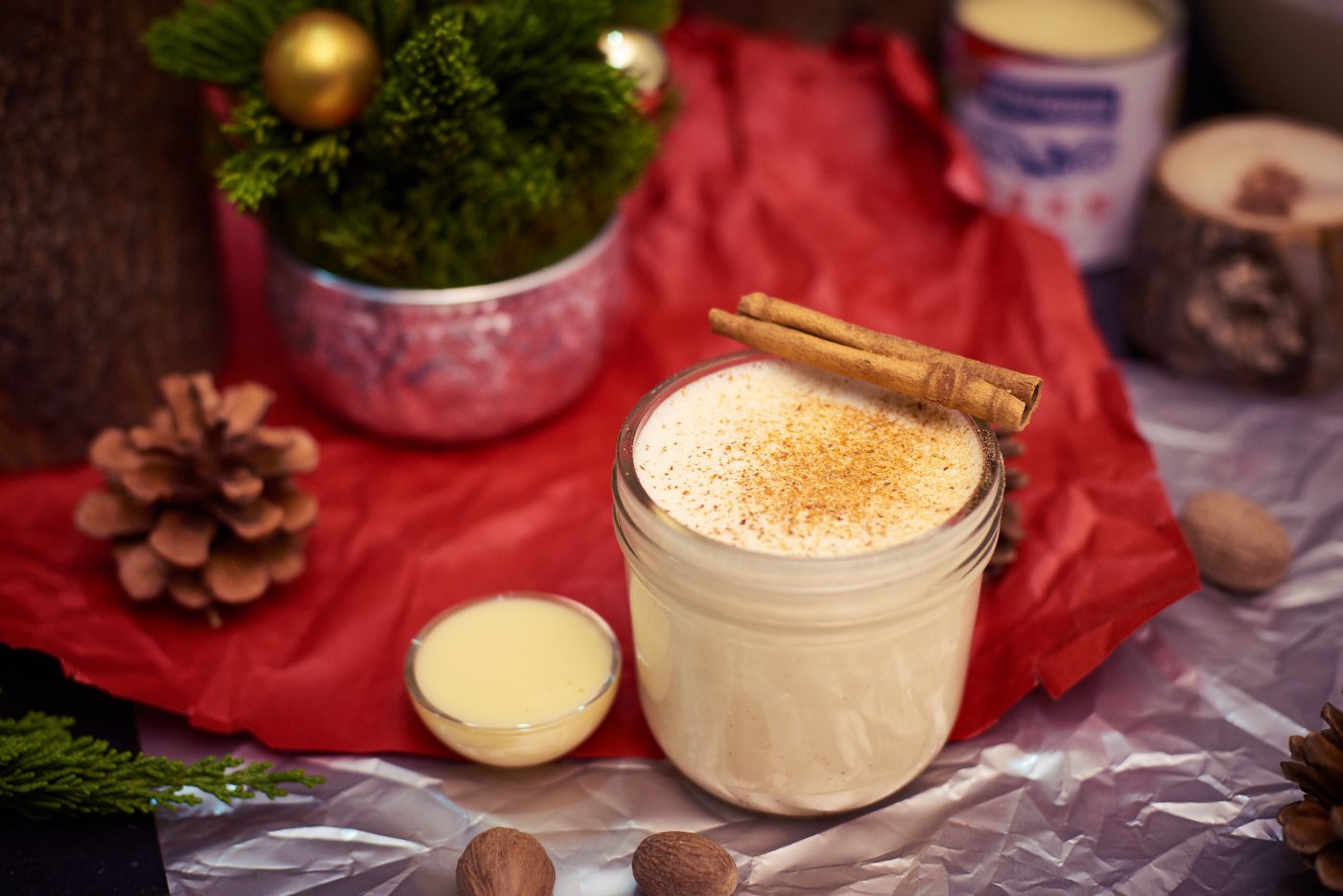 From its centuries-old history to tips for avoiding dairy-based disasters, here’s the skinny on this fatty delight. By Elysia Bagley.

Eggnog – many wouldn’t see a December pass without it, while others find the thick, creamy drink just too heavy to swallow. But whether you fall on the side of love it or hate it, come the holidays, the illustrious mix of raw eggs, spices, dairy and booze is the only cure for the seasonal thirst of guests strung out on festive cheer.

Like so many great things, Eggnog’s backstory is a little fuzzy, but most historians agree that it arose from the late medieval drink Posset – a mixture of hot milk curdled with wine or ale which was then sweetened and spiced, typically with nutmeg and cinnamon. After curdling, the curds were separated to be eaten alongside the resulting drink.

While it may not sound familiar, this leading libation of the Middle Ages was widely present throughout centuries of drink history. For a time it served as a remedy, but mostly it saw status as a tipple of the wealthy (due to its luxury ingredients of spirit, spices, fresh milk and eggs), brought out in celebration of holidays and special occasions that called for splurging on fancy spices. It was even name dropped by Shakespeare when Lady Macbeth drugs a Posset to knock out the guards so she can carry out her murderous plans.

As such, this predecessor to Eggnog changed form many times. Eggs were eventually added to the mix, and egg-based drinks branched out in all kinds directions: one route saw the addition of an acid for curdling, resulting in Syllabub; another saw the removal of dairy entirely to become the popular maritime drink of ale, rum, eggs and sugar – the Egg Flip. According to the Smithsonian, Possets were even thickened with breadcrumbs, biscuits, oatmeal and the like to further pronounce its edible aspect, with one notable recipe specifying that the mix become “like a cheese”. And then, at some point, both Syllabub and Posset morphed into straight up desserts – such as Lemon Posset – which still have places in modern British cooking. Eventually, by one way or another, we arrived at Eggnog.

Whatever history tells about its early days, the Eggnog we now know arose in colonial America. There’s a widely circulated recipe reportedly written by the nation’s first president, George Washington, whose (seriously boozy) late 1700s version spiked two litres of milk and cream and an undisclosed number of eggs with a combined litre of Jamaican rum, rye, sherry and brandy; ending with the instruction “Taste frequently”. Less widely reported, however, is that a spokesperson for Mount Vernon (where Washington lived) has said there is no recipe decisively linked to him – but Americans are choosing to ignore that. Suffice to say, whoever wrote it had a bloody high tolerance.

Wherever it came from, in Imbibe! David Wondrich writes that by the 1860s, Eggnog’s popularity was universal, quoting Jerry Thomas on saying the drink “is a beverage of American origin, but it has a popularity that is cosmopolitan.”

So how did Eggnog’s saga truly begin in America? Well, with the New World came the replacement Posset’s shift from a drink of the rich to a drink of the everyman. A lot of this was due to the fact that an abundance of farms meant just about everyone had regular access to fresh milk, eggs and reasonably priced spirits; differing from the situation in Europe where, historically, all of the necessary ingredients were commodities only acquirable by the wealthier class.

This leading libation of the Middle Ages was widely present throughout centuries of drink history.

Going back to Washington’s alleged recipe, the variety of spirits reflects how the alcohol in Eggnog has seen as much evolution and variance as the drink itself. Growing from the early days of blended cream and eggs with wine or ale (which, it must be said, just sounds awful), during its prime, rum became the choice spirit, for several reasons.

One was that America’s close proximity to the Caribbean, along with the founding of distilleries in New England, meant rum was easily accessible for most – not to mention cheaper than spirits coming over from Europe. It wasn’t until later that we saw the current American preference for bourbon. “Using whisky in the Egg Nog [sic] was strictly a backwoods practice”, explains Wondrich, “swells and epicures preferred brandy or rum, or fortified wine in theirs.”

Then, let’s not forget one crucial thing: during Eggnog’s rise, there was no refrigeration. Adding a strong spirit such as rum, rather than beer or wine, helped preserve the Eggnog during the pre-refrigeration era, while also making the eggs and dairy safer for consumption after it aged (see below for notes on ageing).

And so we reach today, when the holiday season sees Eggnog lining the shelves of American supermarkets in every kind of variety – just add booze and it’s ready to go. While it’s still a necessity for the holidays, the art of homemade ‘nog has somewhat lost its allure for many families, likely much to do with both the convenience of ready-made and the rise of over-exaggerated fears of contracting salmonella from raw eggs. Cheers to our ancestors for whisking the mix and taking the risks.

That said, when Christmas time comes around, many bars around the world prepare their own batches of the drink, whether traditional or with modern twists – right now, the cool kids are all about aged Eggnog, and we’re trying our hands at a clarifying it (with a lot of guidance from Tom Egerton of Proof & Company, whose next level Eggnog recipe you’ll find below, along with some tips).

In the end, as Wondrich says, “The very idea of Christmas or New Year’s Day without the stuff… It just wouldn’t be a holiday.” Because when it comes to seasonal imbibing, there’s nothing more festive than a creamy glass of spiked liquid gluttony to help cope with the eminent influx of family members – nor a drink better suited for toasting to the incoming new year, when they’ll all have gone home.

1400s Eggs allegedly enter the Posset when, according to Eggs: A Global History by Diane Toops, monks dress up the drink with eggs and figs.

1800s Eggnog becomes all the rage in America.

1826 The Eggnog Riot in on Christmas Eve in Baltimore goes down in history when West Point Military Academy cadets protest a ban on alcohol by smuggling in booze to make Eggnog, subsequently resulting in vandalism, lots of fights and the expulsion of many men.

1 Twist it
While you can’t go wrong with the classic, inserting your own style can delight and surprise. “Like any great mixed drink, Eggnog is the combination of different elements which can be adjusted and swapped out to create a familiar yet truly unique final product,” says Tom. “Egg yolk gives you fats and proteins; sugar helps to bind proteins, thickens the mixture and stabilises the mix; cream and milk add extra fats and give texture and length; the alcohol gives body, flavour and character; while the spices give life and excitement to the mixture. Any of these elements can be switched to create a final product which is unique while still remaining fundamentally an Eggnog.”

2 Boozy or booze-free
One of the best things about Eggnog is that it can always be served with or without alcohol, another reason why it’s the perfect classic drink of family gatherings for the holidays – though of course, there’s always someone who “accidentally” drinks from the wrong bowl. To make a virgin batch for no-abv guests, simply eliminate the alcohol from the recipe.

3 Try it warm
Nowadays, like most milky drinks, Eggnog is served chilled – but that’s only been the standard for half a century or so. In its various forms throughout history, Eggnog was a winter warmer imbibed during the chilly holiday season. So this year, whip up a throwback to colonial times and offer hot ‘nog alongside your Toddies, and Mulled Wines. Just remember – heat it very slow and steady, so as not to curdle the milk and eggs.

4 Swap out the dairy
These days there are lots of options beyond milk, should you want to cater to guests who don’t consume dairy for any reason or you just want to mix it up. Try soy, oat, almond, coconut or the like for a dairy-free ‘nog.

5 Nutmeg, baby
Nutmeg is one of Eggnog’s most defining characteristics, so we say do it right: don’t skimp on it, and always grate it fresh if possible – especially when garnishing.

6 Egg safety
These days many dishes or drinks contain raw eggs, and for the most part, you don’t have to worry about using them – actually, eggs have their own protective layer to keep out bacteria, and so those such as salmonella generally result from over-washing and substandard factory farm environments. Just make sure your eggs are fresh and come from a good source.

7 Be aware of who you’re serving
That said, using raw eggs does mean Eggnog shouldn’t be consumed (alcoholic or not) by elderly guests, pregnant women and people with weak immune systems. “If you do need to be 100 per cent sure of the safety of your eggs,” says Tom, “Nathan Myhrvold’s Modernist Cuisine recommends placing eggs in a sous vide at 55C (151f) for two hours – the trick is cooking at a high enough temperature to pasteurise, but at a low enough temperature to avoid making soft-boiled eggs.” Another option is aged Eggnog (see below).

8 Age it
First off, ageing your Eggnog can result in a more developed, well-rounded flavour that mellows out the sharp edge off the spirits added.

But moreover, if you are worried about contamination, aged Eggnog is the way to go. Yes, it’s well known that alcohol has bacteria-killing power, but adding booze to raw eggs doesn’t immediately eliminate existing bacteria – it happens over time. If you want to age your Eggnog, you should do it in the fridge at 4.44C or lower for at least three weeks.

There’s a study on this very topic, covered by NPR in 2008 – microbiologist and “Eggnog expert” Vince Fischetti of The Rockefeller University in New York conducted an experiment using the university’s infamous six-week refrigerator-aged Eggnog recipe from the Laboratory of Bacterial Pathogenesis and Immunology; created by Dr. Rebecca Lancefield in the early 20th century. Fischetti purposely contaminated the Eggnog with an abundance of salmonella – after three weeks of ageing in the fridge, it was completely sterile.