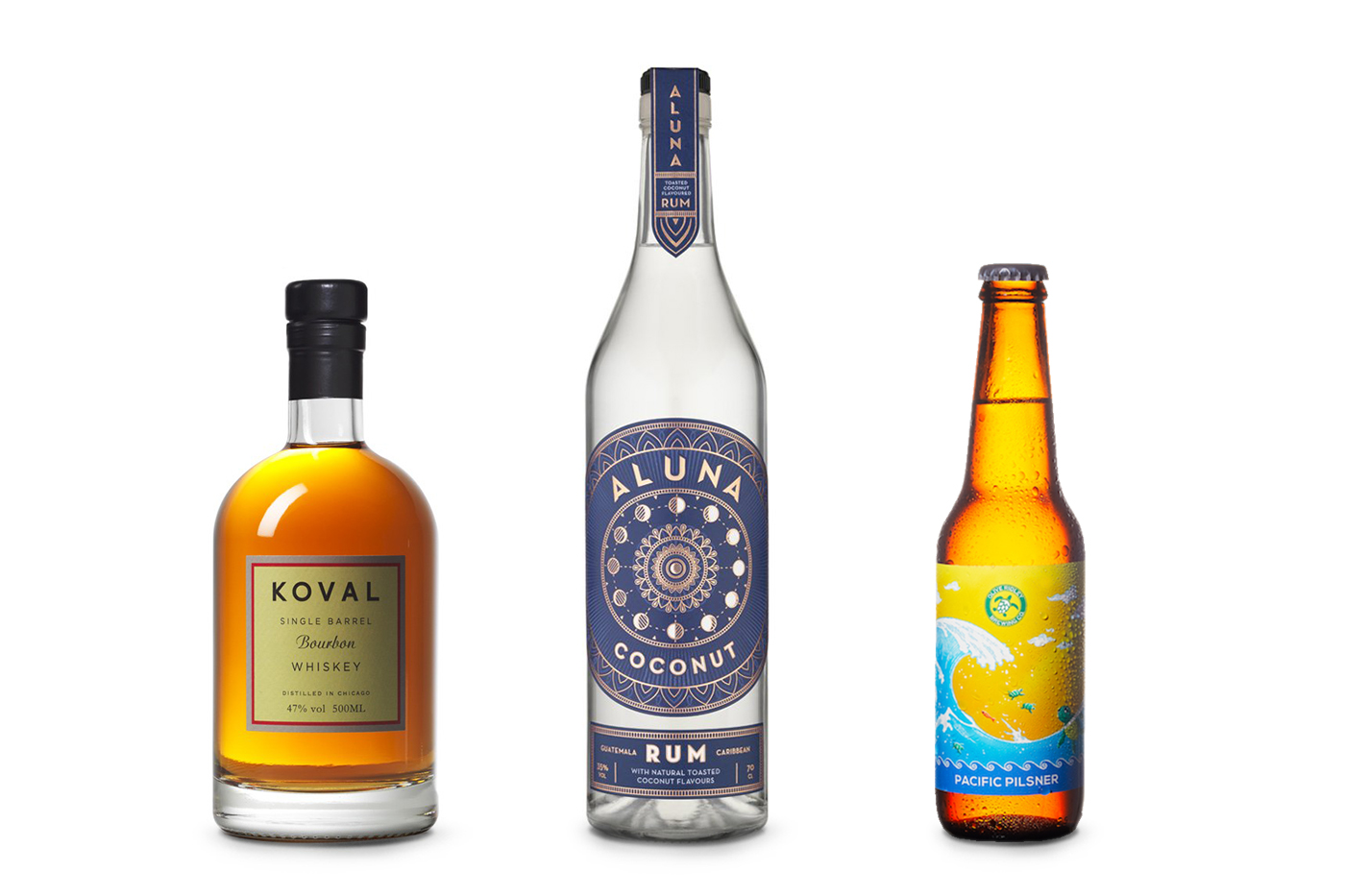 Aluna Coconut Rum
A blend of Guatemalan and Caribbean rums, Aluna’s toasted coconut flavours are all-natural. The Guatemalan rum is made with virgin sugarcane honey that’s been fermented by yeast extracted from pineapples, giving the spirit fruity and floral aromas, while the blend of Caribbean rums from Trinidad and Guyana add more traditional notes. The blend is then cut to 35 percent abv, at which point they add sustainably sourced coconut water and a small amount of sugar. On the nose, it’s light with a subtle coconut aroma followed by a hint of fresh banana. Thankfully, it doesn’t come with the cloying teeth-fuzziness on the mouth that a lot of coconut rums are guilty of, courtesy of the low sugar content. Toasty with hints of vanilla and cocoa, the finish is smooth and clean, and its trendy bottling is a world away from other coconut rums. Aluna would make a great base for a lighter Pina Colada or coconut daiquiris and mojitos – also pleasant sipped neat or on ice. 35 percent abv.
Available from: Hong Kong, Drinks 99 (+852 3591 1044)

Koval Single Barrel Bourbon
Koval produces spirits in Chicago’s first distillery, established in the mid-1800s. It was founded in 2008 by Robert and Sonat Birnecker, who wanted to bring the distilling traditions of Robert’s Austrian family to the US; making organic spirits from scratch and controlling each stage – from milling locally grown grain to distilling, barreling and bottling. Known for its whiskies, Koval also produces peach brandy, prune brandy, vodka, sunchoke spirit, barrelled gin and dry gin. Koval’s single barrel bourbon has the required mash bill of at least 51 percent corn, but millet – the main cereal of Asia and Africa – is used instead of instead of rye or wheat, and is aged in a charred new American oak barrel. On the nose, the bourbon boasts a fruitiness reminiscent of mango and red berries, with a subtle hint of vanilla. On the mouth, there’s a sweet stone fruit start, rounded with buttery caramel and slightly smoky, peppery notes on the finish. 47 percent abv.
Available from: Hong Kong, Artisan Spirits (+852 3105 8431)

Olive Ridley Brewing Company Pacific Pilsner
This small Hong Kong based independent brewing company – like most brewers in the city – does not have its own brewery, but shares one with other producers to create small-batch artisan beers. It takes its name and inspiration from Olive Ridley sea turtles, which are nearing extinction due to the destruction of their nesting sites. Devastated at this, founder Stefan Grovit decided to launch a craft beer with a mission to protect sea turtles – and the Olive Ridley Brewing Company was born. It was at an Olive Ridley nesting site on Morjim Beach in northern Goa, India, that Grovit was first drawn to the cause, and the company now works on a turtle conservation there alongside the local community. The brewers also work closely with Hong Kong-based NGO Aquameridian to protect Green Sea Turtles in Hong Kong, and donate a portion of their profits to global efforts toward the cause.

Olive Ridley currently has three bottles – Shell Shock IPA, Morjim Pale Ale and Pacific Pilsner. The Pacific Pilsner, inspired by New Zealand hops and created by dry hopping Motueka and Hallertau Blanc, is a little heavy for a pilsner, but on the nose it’s refreshing and citrusy. On the palate, there are notes of tropical pineapple and passionfruit, with a hint of bitterness on the back. 5 percent abv.
Available from: Hong Kong, Stefan Grovit (stefan@oliveridley.beer)