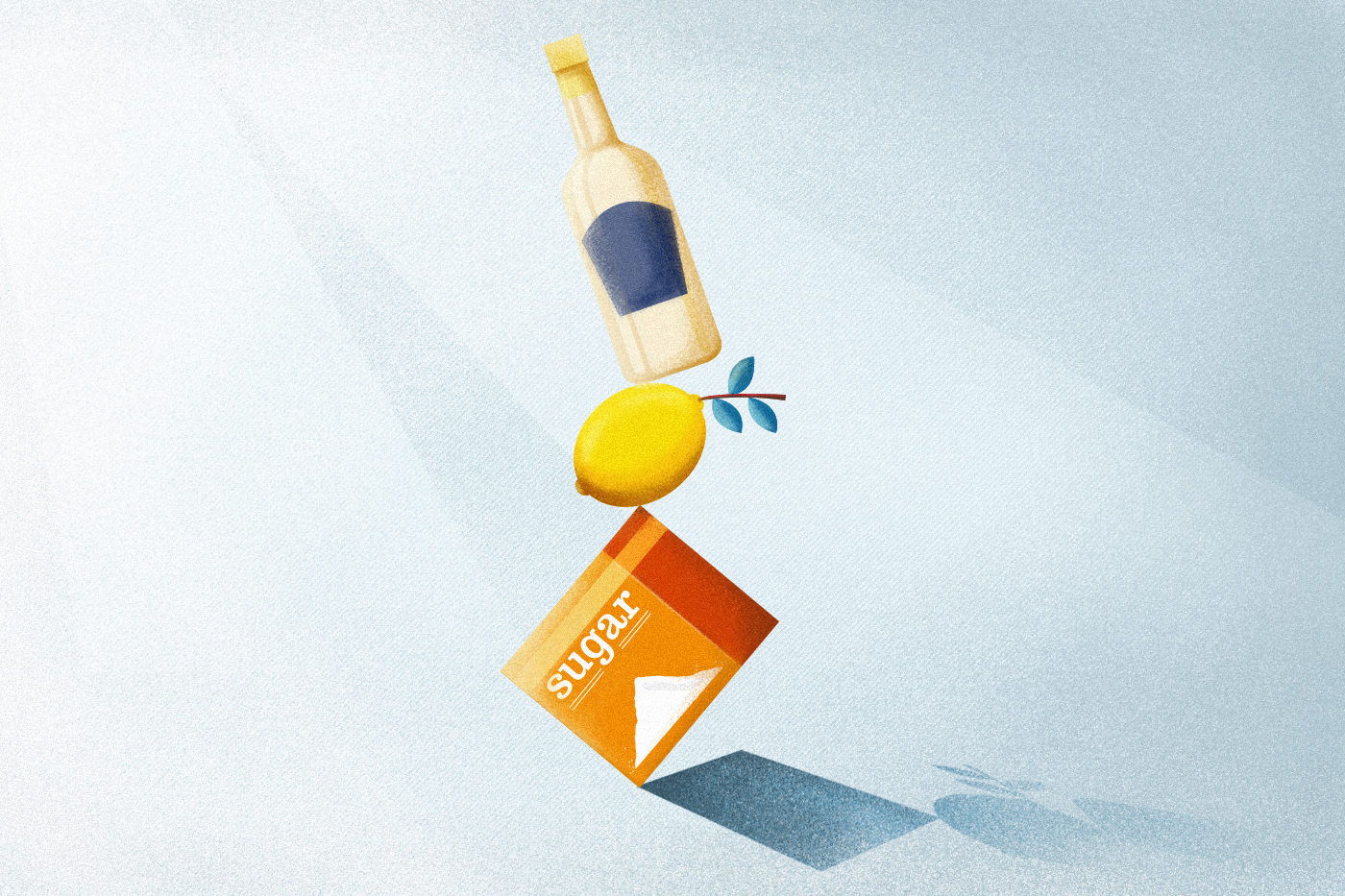 Cocktail families: Understanding mixed drinks, one family at a time. By Paul Mathew.

They may not be the oldest family of mixed drinks, but in the daily life of a bartender, Sours are almost certainly the most ubiquitous. The Sidecar, the Margarita, the White Lady, Daiquiri… these are all drinks that share a common identity, and its an identity they got from their parents, one of whom was the grand ol’ Whiskey Sour.

Now the Whiskey Sour was in fact one of six brothers and sisters: the Whiskey Sour, the Brandy Sour, the Gin Sour, the Santa Cruz Sour (using Santa Cruz rum), the Jersey Sour (made with Applejack, a spirit distilled from fermented apple juice) and the Egg Sour (using brandy and an egg). There may have been more in the family, but these were the ones officially put down on paper by Jerry Thomas, the so-called father of American bartending, in his 1862 classic, The Bartender’s Guide, or How to Mix Drinks.

Essentially a sour is a base spirit mixed with lemon or lime juice and a sweetener, usually simple syrup, but possibly grenadine or pineapple juice, and later still in its development replacing the sugar syrup with an alcoholic (but still sweet) liqueur, such as triple sec or apricot brandy. What these formulations share is a perfect balance between a sweet element and a sour element, a balance which then becomes the stage for the chosen spirit’s flavours to act out their own little show.

Sour and sweet, sweet and sour. It’s probably the most leant-on double act when it comes to pleasing human tastebuds, used in cooking and drinking all around the world. The contrast is both cosy and invigorating, and fairly dominant. It can hide a multitude of sins, and make something pretty ordinary instantly exciting. Think of pancakes, dripping in lemon juice and sugar.

For the early bartenders, the combination was relied on to mask poor quality spirits. Plus, there’s every reason to believe that for the common man in the 19th century, the taste of lemons and limes was still relatively exotic. And while that particular excitement may have passed, the sweet and sour partnership has survived, thanks to the way it has evolved.

In his book The Joy of Mixology, Gary Regan identified the New Orleans Sour family as a descendant of those original Sours, but this time using an orange liqueur (triple sec or curacao, and more specifically Cointreau and Grand Marnier) as the sweet element. He called them New Orleans Sours because he saw the evolution of these drinks from the Brandy Crusta, itself invented in New Orleans around 1850 by one Joseph Santini. His, the original Crusta, has brandy, sugar syrup, triple sec, a dash of lemon juice, a great big piece of lemon peel as a garnish, and a sugared rim – from where it gets its name.

The beauty of sours is balance. They are not meant to be sweet drinks

We don’t need to discuss that drink here too much; we’ll cover Crustas another time. But it can be seen as a precursor to a line of drinks including the Sidecar (a simplified, modernised, sour-ised version, emerging in Paris during the First World War), the Margarita (replace the brandy with tequila, and the lemon with lime juice), the White Lady (big in London around the 1930s, using gin instead of brandy) and several other variants like the Pegu Club Cocktail. In fact any spirit will work to a greater or lesser degree of success in this formulation of lemon or lime juice against orange liqueur, as long as you tweak the balance between sweet and sour. And decades later, new children of the New Orleans Sour are still being born. Take the Cosmopolitan – a child of the 1980s and essentially a Vodka Sour (made with triple sec) plus a dash of cranberry juice for colour.

Before any of that was happening, the standard sour was taking on a life of its own. Whiskey Sours have proven not to need any fancy orange liqueur to survive history, while rum, lime and sugar had been making everyone happy (from British sailors to Caribbean farmers) long before it eventually got given a name – the Daiquiri. In Brazil, give or take some ice, it was called a Caipirinha, in the French Caribbean a Ti’Punch, or Little Punch – which is apt, seeing as the Sour family can also be seen as simplified, one-glass version of the Punches which preceded all cocktails completely (more of them in another article). And we all know what the Daiquiri spawned: more frozen and fruity variants than there are girls in stilettos to drink them.

The point is that this simple balance of sweet and sour has released a thousand permutations of cocktails into the air. And we haven’t even mentioned Sours made not with spirits, but other liqueurs. Think Amaretto Sour or a Midori Sour (also with these, think about taking out the simple syrup element completely – these are already sweet ingredients). Or swapping the triple sec in the so-called New Orleans family for a different flavoured liqueur (what Gary Regan calls “International Sours”) – apricot brandy, say? Or what about experimenting even more, and combining a different sour element with your lemons and limes – grapefruit or cranberry juice perhaps?

Sours are the best vehicle for a bartender to start inventing their own drinks. They are also approachable for the consumer – generally simple in flavour, and neither too strong, or too long. Below is a selection of recipes, both classic and original which illustrate the evolution of the Sour family. How about you try to add your own?

Three celebrations of being sour

Whiskey Sour
The head of the Sour family, dating back to the mid-19th century, and a minimalist development of the punch which was the dominant mixed drink 100 years earlier. Ice’s arrival in the mainstream around the same time may have encouraged bartenders to up the citrus element, as the sour element could now be incorporated with its sharp edges smoothed off. Jerry Thomas’s 1862 recipe calls for:

Clover Club Cocktail
By the start of the 20th century the Sour had become one of the dominant vehicles for mixed drinks, with variations aplenty. The Clover Club Cocktail, developed as an identity badge for a group of well-to-do Philadelphia lawyers and writers, is one such historical footnote. Fortunately it’s now been resurrected, although the pink colour may not find so many fans among modern-day lawyers. The sweet element has been switched to raspberry and the Clover Club is also a Sour that, like many, uses egg white to add a lasting foam and texture. If you are worried about raw eggs, use pasteurised egg white. Ultimately you can also just forget it.

White Lady
A classic New Orleans Sour (in the Gary Regan categorisation), this one appeared a few years after the Sidecar and can be credited to Harry McElhone, when he worked at his own Harry’s New York Bar, in Paris. The White Lady is a universally popular, fail-safe classic, served a crisp aperitif, or a slightly more boozy late night palate cleanser.

1Never use a sour mix if you want to be a professional bartender. First, some drinks call for a lime edge and some for a lemon edge. The two are not the same and a Daiquiri (limes) made with Whiskey Sour mix (lemons) is no longer a Daiquiri. Second, fresh juice tastes better than preserved juice. Third, commercial mixes don’t always use sugar, but chemical things which have funny aftertastes. Fourth, and the most important, you cannot control the balance.

2The beauty of Sours is balance. They are not meant to be sweet drinks. Nor are they meant to make your lips pucker up like a cat’s… The balance is meant to be in the middle.

4What makes you go “mmm” and what makes the person paying money for the drink go “mmm” are likely to vary. Ask the person if they generally like sweet drinks or more sour drinks. This doesn’t mean you make them a sweet drink or a sour drink, just that you tip the balance slightly either side of the middle.

5Squeeze fresh juice everyday before service. If you really care, you should check how sour each particular batch of juice is, as this will affect how much simple syrup you add (and vice versa, check each batch of simple syrup is the same). And once again, never use a sour mix if you want to make good drinks.

The Joy of Mixology, by Gary Regan.

The Bartender’s Guide, or How to Mix Drinks, by Jerry Thomas.