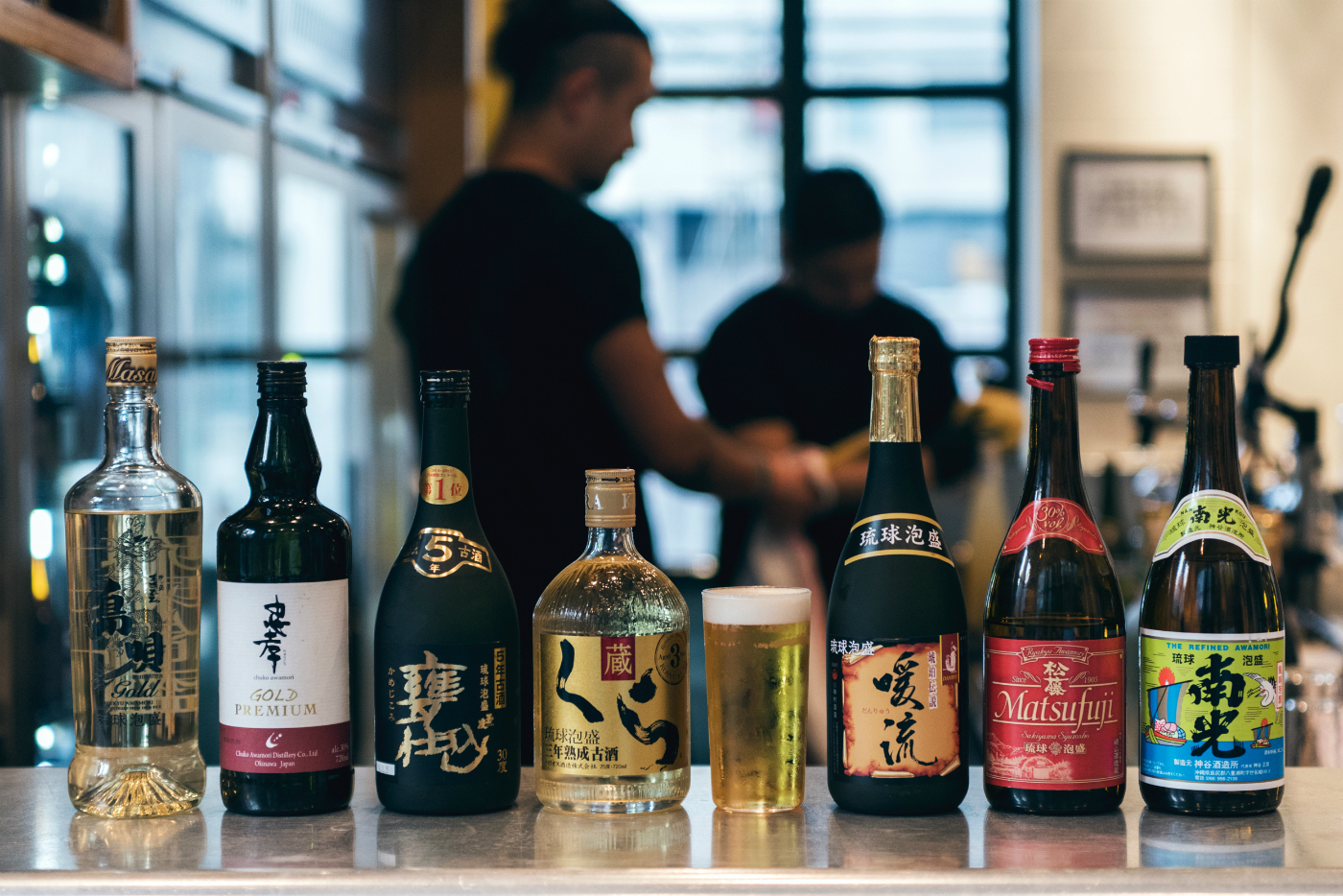 Dating back to the 15th Century, awamori is a spirit brewed from rice, originating from Okinawa and the surrounding islands, where you’ll find 47 pre-approved awamori distilleries – the only places which can produce certified awamori. Whereas sake uses Japanese rice, and shochu ferments and distills from a wide range of ingredients including sweet potato, corn and barley, awamori is mostly distilled from Thai rice (long grain indica). This is due to distillation techniques originally arriving at the southernmost tip of Okinawa from Thailand during the rule of the Ryukyu Kingdom, which traded with China and Southeast Asia.

By law, awamori can only come from the Okinawa prefecture, has to be made from rice and use black koji mould and single fermentation. Though it was produced before wine, sake and shochu, up until 1983, awamori was considered a second class, entry level shochu. But nowadays, it’s getting a little more love. The names comes from the fermentation process: awa means foam in Japanese and mori is the rising effect. So as fermentation happens in an open environment, the mash rises and then falls back as fermentation finishes.

Production
When beer and whisky is produced, water is added to barley to cause its germ to release a complex enzyme which turns its starch into fermentable sugar – what’s called malting. That germ isn’t present in rice, so there’s nothing that water can unlock to reveal a sugar source. Instead, in sake and awamori production, koji mould is introduced.

Koji is a bacterial spore that, when it lands on a grain of rice, will look for food and release enzymes. Firstly, it reaches down into the middle of the grain to look for starch which will its enzymes will convert into fermentable, soluble sugar. They also take fats and proteins from the outside of the grain and turn those into amino acids – essentially creating umami flavours. This is why sake rice is polished: to expose the starch so there’s more sugars and less amino acids.

Even when sake rice is less polished, there’s still about 20-30 percent of each grain removed. When awamori is made, however, the rice has only been polished by about two percent, so that means you get a product with very high umami – the koji can’t reach the starchy centre as easily, so it uses the fat and protein from the outside and less sugars from the inside.

In sake production, yellow koji is typically used as it can survive in colder temperatures. But when it gets too hot – such as in Okinawa’s subtropical climate – yellow koji doesn’t perform, so black koji is used for awamori instead. Black koji also creates an environment with enough citric and lactic acid to kill off any microbes, bacteria or organisms that might harm fermentation – helping to create awamori’s typical flavour. Fermentation lasts around three weeks on average.

Maturation
After distillation in a pot still, dilution with water and before ageing, the product is called shishu. To classify awamori as koshu (or couth), it must be aged for three years by law. However, it can also be bottled young and often uses fractional blending (like the solera system for sherry).

To mellow and enrich the flavour, maturation can be in cold or warm storage, and take place in a variety of vessels, which can include anything from ceramic urns made with Okinawan clay – which is the more traditional and therefore the common choice – to barrels including ex-bourbon or sherry casks and stainless steel. A lot of distilleries allow you to purchase your own shishu to rest in their cellars and you can eventually take it when it’s aged to your liking.

Serving awamori
The ABV of awamori ranges from 40-50 percent but can be brought down to around 22-24 percent. As a bartender, you don’t always need to rely on your dilution skills (the Japanese have their own proportions listed below) as the lower percentage awamoris are leaner and lighter and therefore better for cocktails, but the heavier ones are better for drinking straight.

When it comes to cocktails, the best way to serve it is as a danball: awamori, fresh lime and soda. The acid of the awamori complements the acid of the lime, which itself brings out the earthiness and freshness in the awamori. Okinawans tend to add awamori to fresh juices and even their breakfast milk and coffee – it’s very easy to drink.

It’s also commonly served with Ukon no Chikara, a turmeric drink which is an excellent hangover cure (and unfortunately illegal to export due to some of the ingredients). If you’re diluting with water, the Japanese use proportions called yuronuku (4/6 ratio), ogo (half and half), rokuyon (6/4) and ichikyu (9/1).