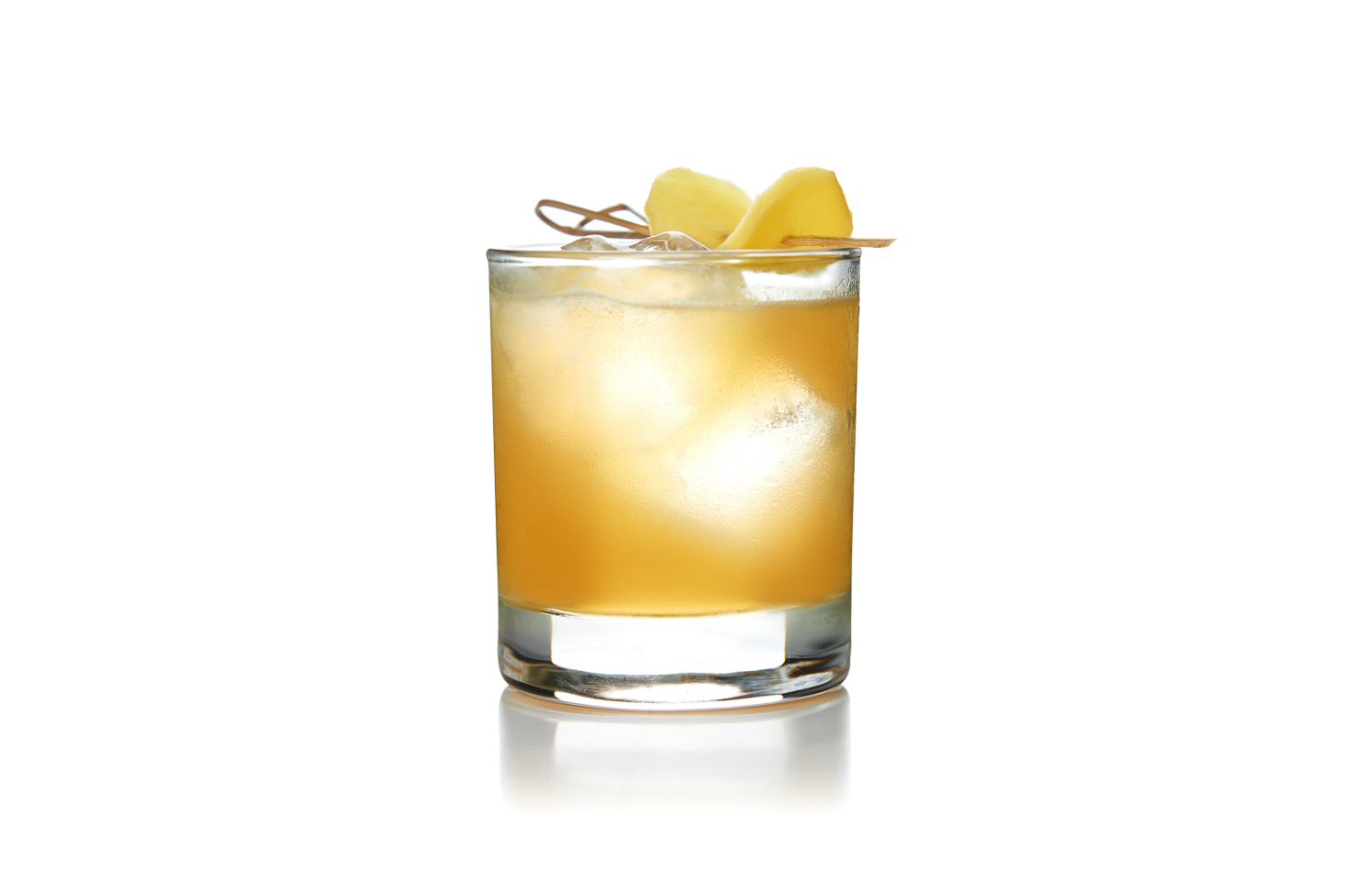 A whisky and ginger panacea that’s a marvel of modern mixology.
March 20, 2018
share

A whisky and ginger panacea that’s a marvel of modern mixology. By Seamus Harris.

The world can seem stuck in a glum cycle. Scarcely had the collapse of the Berlin Wall dispelled the threat of nuclear Armageddon than we stumbled into the so-called War on Terror. The Green Revolution had barely eradicated world hunger before climate change threatened to bring it back. No sooner had Penicillin ushered in an age of medical miracles than microbial resistance to the stuff was turning hospital wards back into petri dishes of flesh-eating disease. It is enough to drive a person to drink. Luckily, there is a prescription for that, a whisky and ginger wonder drug that remains irresistible, the Penicillin cocktail.

Invented by Sam Ross, the Penicillin may go down as one of the classic cocktails of the 21st century. Like most classics, it is crafted from well-worn bricks. Simply a fancied-up Scotch Sour, hanging modern twists on a trusty framework nevertheless results in something novel. Freshly juiced ginger takes centre stage, a nod to the Whisky Mac. For those unfamiliar with it, the Whisky Mac is a scotch and ginger wine cold-buster more common in Scottish golf clubs than trendy cocktail bars – not really a cocktail, it is mixed in the glass without ice. The Penicillin also uses honey, an unconventional sweetener that plays well with bold flavours. Finally, modern bar tools make a cameo as Islay smoke gets deployed to maximum olfactory effect courtesy of a mister Mark Twain, who punctuated his days with scotch and lemon cocktails and must have been intimately familiar with the whisky sour, undoubtedly never drank anything quite like the Penicillin. It goes to show that creativity remains possible even in an age when everything tasty seems to have been discovered already by some other lush.

Let us take that theme of discovery and turn back to Penicillin – the drug. In fact, the world owes a great debt to Scotland. Home to so much more than whisky and golf, essential as those may be, Scottish inventors gave us the telephone, television, pedal bicycle, pneumatic tire, ATM, and even the electric toaster. But perhaps the greatest Scottish invention came when Alexander Fleming, a pharmacologist from Ayrshire, discovered in his notoriously untidy laboratory an unwashed petri dish containing a mysterious mould. Significantly, the mould was surrounded by a halo within which bacterial growth was inhibited. Realising the mould was killing the bacteria, Fleming isolated the mould and identified it as a strain of penicillium. Decades of work followed, but this chance discovery made diseases that were death sentences treatable, and let patients with trauma injuries focus on healing as their infection risk was slashed. A statue of Alexander Fleming stands outside Madrid’s grandiose Plaza de Toros de Las Ventas. The statue was erected by grateful matadors who bore first-hand witness to the miraculous effect of the new drug on mortality rates from injuries sustained in the bullring. Although few of us show the gratitude of those matadors, whole swathes of humanity can thank Scotland for the fact they are even alive.

Famously humble about his discovery of Penicillin (the drug), the whisky loving Fleming might have been more boastful had he instead invented the Penicillin cocktail. Smoke on the nose, the warm velvet of honeyed grains caressing the palate, a ginger glow igniting a fire under it all, and lemon to soothe the throat and draw you back in for that next sip. It is a potion sure to restore even the most committed hypochondriac. Actually, the Penicillin Cocktail is an excellent remedy for the common cold, that depressing condition for which modern medicine has yet to find a cure. Fleming died long before Sam Ross was even born, but had he lived to experience the cocktail named for his discovery, I can picture him quipping “A good gulp of a Penicillin at bedtime – or any time really. It’s not very scientific, but it helps.”

1874 In this year, Mark Twain, preparing to return to America after a visit to Britain, writes to his wife Olivia: “Livy my darling, I want you to be sure and remember to have, in the bathroom when I arrive, a bottle of Scotch Whiskey, a lemon, some crushed sugar, and a bottle of Angostura bitters. Ever since I have been in London I have taken in a wine glass what is called a cock-tail (made with those ingredients) before breakfast, before dinner, and just before going to bed.” Was he drinking a Scotch Sour or a Scotch Old Fashioned? Probably the latter, but we do not know for sure. Either way, Twain teaches us that scotch has a long and illustrious history in mixed drinks.

1889 A scotch-based sour, in the form of a citrus-laced whisky punch, appears in the last edition of Jerry Thomas. But scotch had featured prominently even in Thomas’s original edition of 1862. In that edition “The Professor” instructed: “As it requires genius to make whisky punch, it would be impertinent to give proportions”, and further recommended “Glenlivet or Islay, of the best quality”. Despite the conventional wisdom that peated whiskies are the least suited the mixing tin, in fact they were favoured by the father of mixology himself – unlike today, in the 19th century Speyside whiskies were peated.

1903 Hector MacDonald, the son of a Scottish crofter who rose to the rank of Major General and was knighted for his heroics in numerous colonial tussles, shoots himself in a Paris hotel room. Known to the public as Fighting Mac, the general is said to have invented the Whisky Mac – the manufacturers of Edinburgh’s Crabbie’s Ginger Wine make this claim. Now relegated mostly to golf clubs and seasonal Christmas duties, the Whisky Mac fights fire with fire by pitting scotch against ginger wine – an alcoholic infusion of ginger and spices that was popular in 18th century Britain. The tale about Fighting Mac may be apocryphal, but ginger wine was believed to prevent cholera, and recipes for the stuff were a fixture of Anglo-Indian cookery books. So it is entirely plausible that a Scottish general serving in British India really did hit on the Whisky Mac as a pleasant prophylactic to ensure the good health and spirits of his men. And that nasty business in Paris? The general was travelling from London to Sri Lanka to face court martial over alleged indiscretions involving Sri Lankan boys.

1928 The accidental cultivation in his laboratory of a previously unstudied mould sees Alexander Fleming discover penicillin. Fleming realises the mysterious mould possesses unique anti-bacterial properties, but it takes decades of work by others before a new miracle drug hits the shelves. In his old age Fleming becomes a national hero, consulted by the media on all kinds of health issues. Understanding the health benefits not just of moulds, but also of whisky, when asked how to treat the common cold, Fleming quips: “A good gulp of hot whisky at bedtime – it’s not very scientific but it helps.”

2005 The Penicillin cocktail is invented by Sam Ross, an Australian bartender then working at New York’s Milk & Honey. Ross began his career in Melbourne at the appropriately named Ginger and is now at Attaboy. The Penicillin has been cited as a landmark drink that helped smash traditional ways of thinking and open the minds of bartenders and customers to mixing with scotch, particularly peated single malts. But while it may have been ground-breaking in a sense, in fact the Penicillin still draws heavily on tradition. Jerry Thomas and Mark Twain were partial to peaty cocktails, while the pairing of whisky and ginger stretches back at least to Victorian Britain. Both contemporary and traditional, the Penicillin is guaranteed to please drinkers from any age. Should you need an interesting variation, try making a tequila Penicillin and misting it with mezcal.

Charlene Dawes: “You don’t become someone by sitting around”