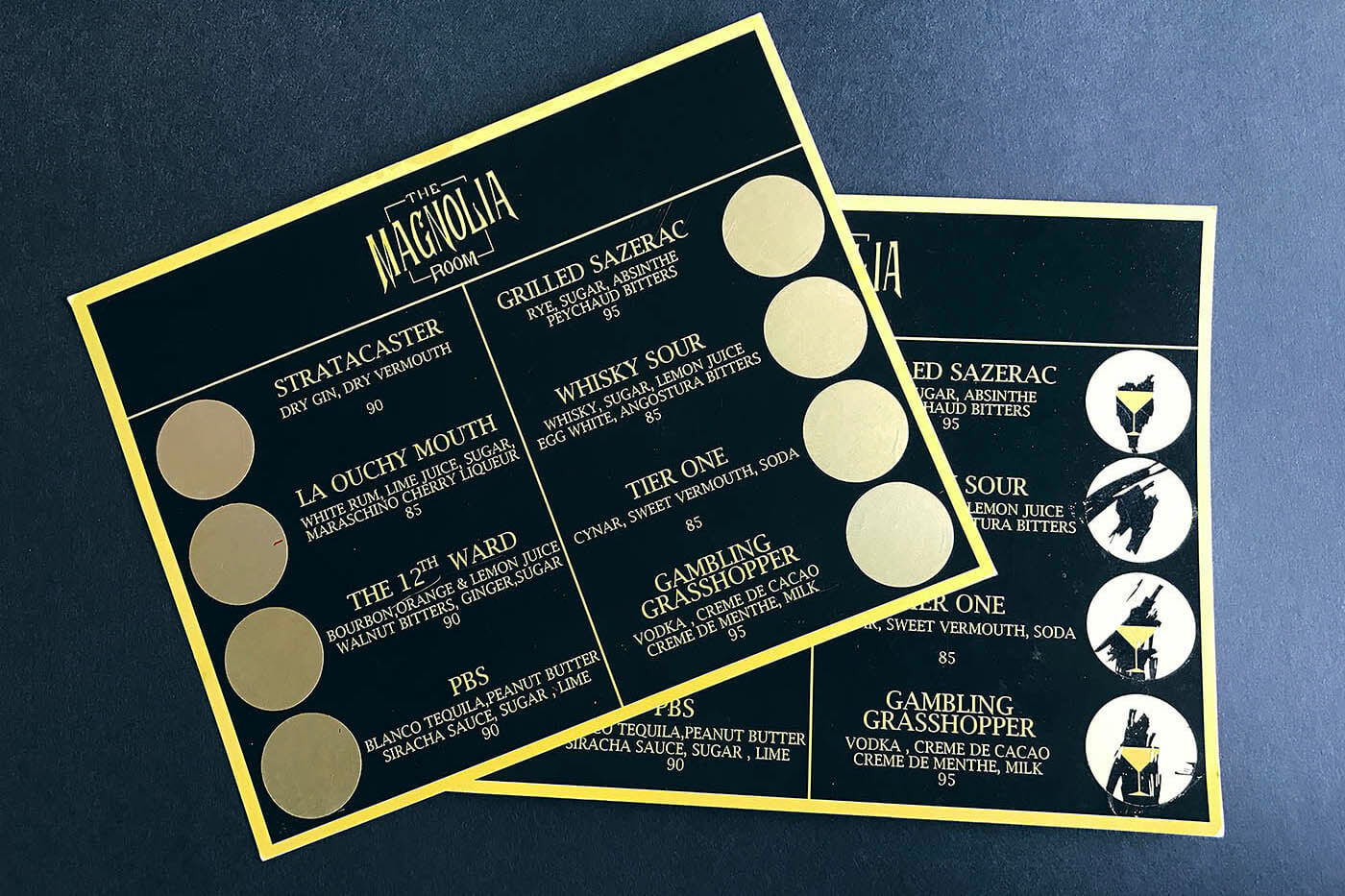 This subterranean Shanghai bar is up to scratch. By Jonathan White.

Mack Ross is gaining a bit of reputation in Shanghai. The Canadian has followed up his (actually) edible menu at Tour with another winner: scratch cards. These are the menus at the Magnolia Room, Tour’s newly opened downstairs sister venue.

Ross admits that the pressure was on: “Since Tour received a lot of attention from that menu, we couldn’t then follow up with a standard menu format.” His inspiration? “I always loved playing scratch-and-win bingo growing up.”

What that means is that guests are asked to choose a menu each from a shuffled deck and then order a drink from it. They can then scratch off the silver circles and hope to find martini glasses – uncover four or fewer and you win a “whole lot of nothing”, five upwards gets you a grilled cheese, shots, a whiskey sour or a bottle of Chivas 18.The idea was simple enough but the execution presented problems, Ross admits. “Finding a print shop that could provide the scratchable feature, the right colours and paper quality and at a workable cost wasn’t possible in the end,” he says.

The solution was rather lo-fi. “We ended up printing out all of the menus and then using scratchable stickers, Ross says. “So in the end, we printed 2,000 menus and had to put eight small stickers in exactly the right place on 2,000 menus. Lots of fun.”

The reaction has been good, Ross says. It turns out that people love winning things, with a lot of guests paying the ¥20 re-up fee to get another menu, and another shot at a prize, if they don’t win first time around. People might be happy when they win even, but they aren’t always happy with their prize. “Funnily enough we have a lot of people winning the sours and the shot that quite often ask to change their prize to a grilled cheese, Ross says.  “We politely tell them that’s not allowed and to order a Grilled Sazerac because it comes with a grilled cheese.”

The win-win of happy customers and increased drink orders is made all the sweeter for the bar by partnerships with Chivas and Jameson to offset the cost of the prizes. Magnolia Room’s menu gamble has paid off – however long it took to attach 16,000 stickers looks like time well spent.