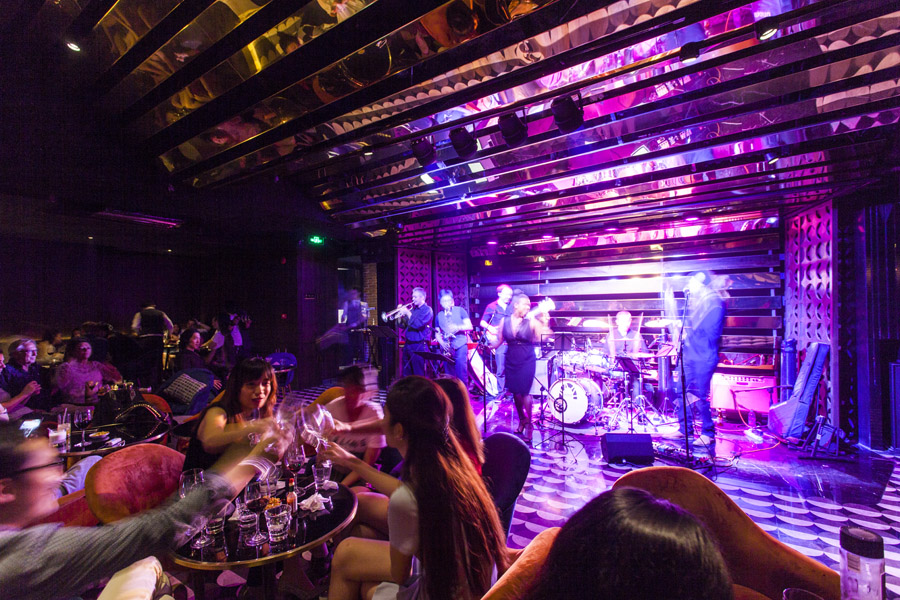 The basic idea, the way [founder] Brian McKay envisioned what he wanted to do, was to combine the live music element with a restaurant and great drinks all at the same time – a supperclub is the way that he describes it. So you come in for your dinner at 8pm – you’ve got that food side of it – and then it transitions into live music and as the night goes on it gets more of a club element. It’s a one-stop shop. You don’t really have to go on anywhere, you can come here and experience every element of a night under one roof. Alongside that, you’ve got good cocktails as well. The cocktails kind of has that fast-casual idea. We wanted it to be accessible but still craft quality. Nothing too crazy, nothing with too many components. We had some fun with the menu obviously, everything has got that soul and funk vibe. People see it’s high–energy, they come enjoy that and hopefully see it as being a seamless progression. They don’t realise. They’re having their dinner but it’s not, “I’m waiting for the show to start.” Some people have come in because they were passing by and not realise we’re a live music venue because it’s behind the partition. You’ve got the shutters that come across. Brian thought about that. The design and the way the room was set up was massively important to him. So again that plays into it. You’re not constantly waiting for the band to come on because they are hidden. Not feeling you’ve just got the expectation about the music but you feel like you are in a restaurant or a cocktail bar. But then it hits 9.30pm, ten o clock, and it’s something else.

You look at the way the bar’s set up. From a functional point of view when I saw an island bar, I was like “arggh” but it works. It’s that same idea of everyone can see each other. You look at what Employees Only did, the way they set up their bar with a curve. It follows that idea that everyone can see each other, they can see the stage, they can see the room, they can interact – we want people talking. You’ve got that raised level as well, that’s kind of cool. You have people, sitting and standing and it all comes together – nobody notices. On a Friday or Saturday night the bar can become a separate entity from the floor. You’ve got people at the bar who are in their own little world because the bar becomes its own thing, but it’s all one thing at the same time. The main floor as well, during dinner its eating, but then it becomes a bit of a dancefloor and we don’t even need to move the tables and chairs. People are just getting up and dancing round their tables and chairs.

This article first published in Issue 46 of DRiNK Magazine.