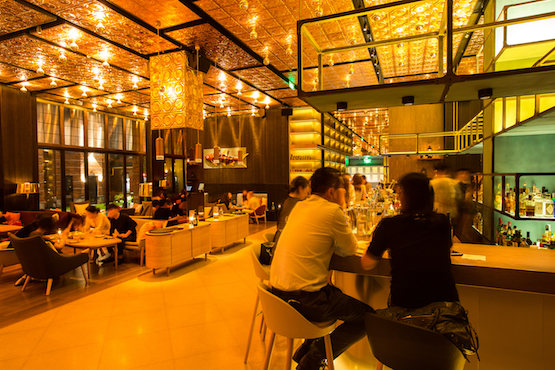 With The Cannery, the city finally finds out what’s next from the team behind The Nest. By Jonathan White.

There are not many serious f&b concepts that are inspired by childhood. Sure, there’s the trend for cocktails that capture the tastes of our youths and then spike them with spirits for our adult enjoyment. And, yes, there are menus that take us back to childhood. But not a whole concept. Until now. The Cannery is the latest venture from Mark Klingspon and the team behind The Nest, the Bund-based gastrolounge that has been on-top since opening at the back end of 2014. The new bar’s inspiration, Klingspon says, was his early days growing up in Vancouver: “It’s inspired by childhood nostalgia, of sitting in the kitchen with my father after my mother and sisters had gone to bed and opening a can of something – sardines or something – and then sharing that over toast while we stayed up talking.” That memory has manifested as a multi-concept gastrolounge on Yuyuan Lu that specialises in seafood from the West Coast – from Northern California to Vancouver – amid a setting that’s one third The Nest, one third glam steampunk and a third modern canning plant. Little design touches include a gold roof, an antique canner brought over from Canada and an HG Wells-esque fish installation, while kitchen staff wear a gumboot-clad look inspired by the West Coast’s wet markets.

This is clearly not The Nest 2. There is also no partnership with Bacardi this time, and although Grey Goose is the house pour for vodka, it’s the only big brand to be found behind the bar. Yet in a roundabout way The Nest is the reason for The Cannery’s existence. The new venue’s landlord had become a regular at The Nest and approached the team with the idea of doing another outlet on Yuyuan Lu, in the space that The Cannery now occupies. That idea didn’t come to pass, but the germ of doing a venue in the area was sown. Klingspon admits that he was the most reluctant to take the plunge initially, largely because the space was located in a part of town not exactly teeming with high-end f&b. “I took a lot of time to walk around the neighbourhood,” he says, “I wanted to get a feel for the place.” Needless to say he came round to the idea and he’s been proved right in the first month after opening: “There is definitely a nice demographic around the neighbourhood, as well as towards Gubei and Hongqiao that will appreciate the proximity of the Cannery.” Klingspon actually goes further having seen the venue operating. “In addition, I see that there is indeed a consumer that doesn’t want to travel to the Bund to come to our sort of venue,” he says.

So what exactly are they getting when they come through the doors? “It’s not just cans, don’t worry,” says Klingspon reassuringly. “It’s a little more to the restaurant side on that gastrolounge continuum between restaurant and bar,” he explains. What that means is simple, snacky cuisine made for sharing, from ingredients that are really loved and not overcooked, some of which is seafood canned in-house. Take the steamer at the bar, the first of its kind in China and only the second in Asia. “We’re getting another brought over – people sat at the bar can have a drink and smell all this great food getting cooked and then get some mussels of their own brought in.” The food aspect may sound simple but it plays out in a concept that’s manifold: an airy lounge with seating similar to The Nest, restaurant seating that can become a private room, a tasting table, an island bar for those that want a beer and some mussels. And then there are the things that are really meant to set the venue apart: an actual working canning station, a fire pit for cooking salmon and a deli with goods available for purchase.

As you might expect from running a bar-restaurant well respected for its high volume business, providing more than one concept in the same lounge and bridging the gap between comfort and glamour without sacrificing either, lessons have been learned from The Nest, even if these are not the same venues. “I promised myself and my team to build a back-of-house to serve for success and volume. Something that we underestimated with The Nest.” The Cannery has 300 of its 650 metres back of house while The Nest’s back of house is just a third of its 750-metre space. The Cannery has seats for 150, the same as The Nest began with before expanding. As with any new venue, there are also the lessons that can only be learned at The Cannery: “The challenge is that we have a fair number of features in the venue, some of which I have not seen before either within or outside of China – the fire pit for smoking salmon, the seafood steamer, the cannery itself. So that’s providing some challenge, and taking all our focus. But we aren’t going to give up until it’s all in place.”

The people learning those lessons are bringing some of The Nest’s experience – chef Freddy Raoult is overseeing both kitchens while bartender Choni Song has moved over to work at The Cannery full-time. And then there are the newcomers who are bringing outside experience, such as head bartender Michael Chen, formerly at Starling. Chen is heading up a cocktail program that’s focused on craft, small batch and artisanal ingredients. Cocktails include a few Old Fashioneds, such as the Peanut Butter Old Fashioned (peanut butter-infused bourbon, salted caramel, chocolate bitters) and the even more Canadian-sounding Cold Fashioned (Buffalo Trace, maple syrup, cold brew coffee). There are a few drinks that are more out there still, such as the Pecorino Negroni (cheesy gin, Campari, dry and sweet vermouth), which has been selling really well according to Chen, and a Martinez By The Seashore, served with an oyster. The Cannery also has eight taps with craft beers (including Rogue and Ballast Point) and a cider from Anthem, with a commitment to rotating them seasonally, alongside a range of wines by the glass from all over the world and a winelist that Klingspon “spent a lot of time on”. It’s two-thirds New World with a lot of West Coast and the remaining third is natural and organic wines from France. “The whole craft, fresh, artisan thing – we’re trying to bring that into all the drinks,” says Klingspon, not least the whiskies. “It was meant to be a bourbon bible, but it’s now a whiskey ledger,” Klingspon says, of an already expanded collection set to include the largest representation of Canadian whiskey in China, packed into a vintage ledger once employed by the City of North Vancouver in 1936.

This Canadian-ness is woven throughout. The deli component is based on Granville Island, an area of Vancouver known for businesses championing locally made goods and produce. This is where guests will be able to buy either Canadian products such as the same boards used at the venue (bigleaf maple tree cut on Vancouver Island, incidentally) or house-made produce like bitters or canned ice cream. The commitment to the country of its inspiration is only set to increase with the venue’s official opening. Intended to be on Canada Day, it would have been marked with an open-air market for Canadian producers in China held on the patio and lawn in front of the venue. That particular parade had been rained on as we went to print, but the future looks bright for The Cannery’s brand of national pride.

This article was first published in Issue 44 of Drink Magazine. Subscribe to the magazine here.

A Crocodile Dilemma by Yao Lu