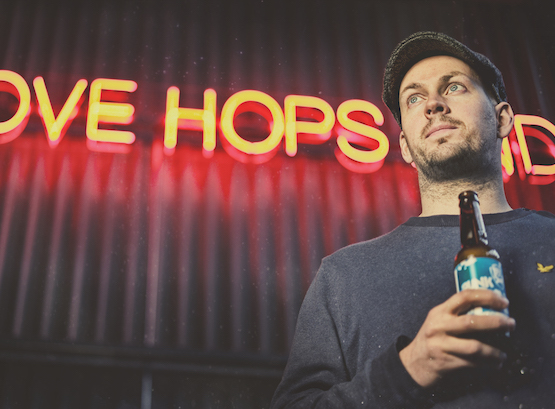 Why is Brewdog so noisy?

We set up in 2007 with two humans, one dog and a big mission to make other people as passionate about fantastic beer as we are. A lot has changed, but in 2007 the UK beer scene was completely dominated by big, faceless, generic, multi-national, monolithic, industrial beer companies. We had zero budget, so we had to be noisy to get the message out there, to help challenge people’s perceptions of beer, to elevate the status of beer. We did take a lot of inspiration from the American scene. But we wanted to put our own spin on things. It was selfish. We were making the beers we wanted to drink and marketing them in the way we wanted. Not just copycat.

In your new book, Business for Punks, is that your manifesto: be heard?

Which brewers did you look to for inspiration?

Stone, Dogfish Head – fantastic quality beers, integrity, people-focused. Stone was also very out there when they made their name in the early 2000s. And Dogfish is so experimental, so eclectic, so many styles. But they are more quirky, more on that folksy side.

Is eclecticism a defining trait of craft brewing?

Stylistic diversity is one of the key things that craft beer is all about. For the last 50 years people have experienced beer in a very narrow spectrum. There is just so much more beer than mass market industrial pilsner. Sometimes you might want the decadent opulence of an imperial stout; sometimes the bitter, piney, resinous hit of an IPA; or the mouth-puckering acidity of a Belgian lambic. There are so many amazing beer styles. We’re giving people the chance to experience the breadth and depth on offer. Is there something that ties your beers together?

Yes. Hoppy IPAs are the theme of what we do. Sixty to seventy per cent is on that hoppy, West Coast IPA spectrum. That’s what we are best known for.

When did you know you were a success?

The first few years were tough. It was just the two of us. We moved back in with our parents. We were filling bottles by hand and selling it at farmers markets. That whole time people told us to make cheaper beers, beers with less hops, or less flavour. But we were determined to make the beers that we wanted to drink ourselves. As I said, it was selfish really. But it was around 2009 or 2010 that things started picking up. And one of the things that really helped was Equity for Punks, when we gave people the chance to invest in our company. We’ve now got a community of 35,000 members. We’ve always tried to shorten the distance between ourselves and the people who enjoy the beer we make, and Equity for Punks is the ultimate end-point for that philosophy. We don’t just have 35,000 investors, we have 35,000 advocates. It’s an alternative business model for a 21st-century consumer.

Had you owned a business before?

I studied law, but after two weeks in a legal office I decided I didn’t want to do that. So I used to work on a fishing boat. But all the time I was on the boat, when I was at home I would brew beer with my [now] business partner Martin Dickie. In 2006 we met the legendary beer expert Michael Jackson and he tasted our beer and told us to quit our jobs and start making it seriously. So we got a GBP20,000 (¥184,000) bank loan, some secondhand stainless steel tanks and cobbled a facility together on a shoestring and started. We’ve now got 450 people in the company. We focus on brewing the best beers we can and being the best company we can to work for. It’s harder, but company culture is where I spend so much of my time now. It’s very exciting. It’s communication. It’s alignment. Making sure we hire people with the same passion.

You’ve had some famous bust-ups along the way, yet you seem down to earth. How does that fit?

I think we’re quite unique in that we have the courage of our convictions. We have the balls to come out and say it. So many companies are scared to take a stand. We’ve had bust-ups with Diageo, with the Advertising Standards Authority, we’ve parodied Vladimir Putin. We’re just going to do it. We’ve never shied away from controversy. Has the controversy ever been anything but good for business?

No, everything we do is because we’re passionate. Presenting our 55 per cent The End of History beer in a bottle encased in a taxidermied stoat – we did that because we wanted to challenge people’s perceptions about what beer was. It was designed to shock people into thinking, and start understanding that beer doesn’t have to start with Stella and end in Tennent’s. It’s done with those intentions.

Ice distillation. We take a 10 per cent base and blast it at minus 40 degrees and the water turns to ice before the alcohol does, then we remove the ice – so we are concentrating the flavours and turning up the volume on the abv. And we do that over a few months, and we can go from 10, to 30, to 40, and eventually 55 per cent abv. It’s multiple, multiple stages. The higher you go the smaller bump each time you get and the colder the temperature needs to be. For the 55 per cent we started with 2,000 litres and got just 12 bottles. It’s the same technique as for making eisbocks, which traditionally went from 8 up to 12 per cent, so this is just an eisbock on steroids.

What’s the hardest beer to make from a technical standpoint?

Either something that is very high or very low abv. The Tokyo is fermented to 18 per cent. Pushing ale yeast that far is very tough. We pitch in with champagne yeast; we feed it sugar at various stages; we oxidise the wort; we add enzymes. That takes a lot of time and a lot of witchcraft and magic. The Dead Pony Club is only 3.8 per cent and the challenge is to get as much flavour and body in as you can in a session beer. But it’s something we are most proud of, for that beer to still taste the way it does.

With Equity for Punks and the rapid expansion via your branded bars – to an analyst, it might look like behaviour that precedes a sale. What would you say to that?

I would rather shoot myself in the face than sell the company. The American breweries that have done it go against everything that craft beer stands for, and that’s not why we’re doing it. We are doing this because we are passionate about great beer and want to build an amazing company for our staff to be involved with, and to have fun while we are doing it. I have no intention to build up for a sale. It’s a categorical “no”. Is there a target for how big you grow?

We were at about 130,000 barrels last year, but I will always tell the team that we never get to determine how much beer we sell. We get to determine which beers we make. Whatever figure we get to, that’s the amount we sell. So we’ll never discount. We’ll never change the beer just to sell more.

That’s possible when your shareholders are beer lovers not pension funds.

They love good beer as much as we do. We don’t have to make compromises to appease our owners. We don’t have a VC pushing us to hit numbers, or a big beer company controlling us, wanting to outsource production or reduce quality.

What’s the strategy with opening the bars? Is it simply a route to market, or brand-building Brewdog?

It’s not just for Brewdog beers. Half of what we have on tap is not ours. We import directly from the USA, from Scandinavia, from Australia. We focus on the staff, so they are all trained to Cicerone level. The bars are where people can get excited about the best beer on the planet. We’ve just opened two more in the in the UK – that takes us to 38. In Asia we are looking at a few things. We’d love to do something in China.

Is your production still all going to be in Scotland?

We have actually just started construction on a new plant in Columbus, Ohio. That will be Brewdog’s own brewery. It’s a USD25 million (¥163 million) investment in the US market. We could export there, but to really do some damage we need to get to the customer quicker and at a better price point. There is so much demand in the States that it’s not feasible for us to service it from the UK – the market share for craft is already nearly 20 per cent.

How does the US market differ?

Higher abvs. In the UK the sweet spot is maybe 2 per cent lower. A lot of the best-selling beers in the US are around 7 per cent; Victory’s best-selling beer Golden Monkey is 9 per cent. And it’s mostly hoppy beers. But in terms of understanding and appreciation it’s a good bit ahead. I was in San Diego, and walked into a gas station and they just had this amazing selection of beers. In a gas station.