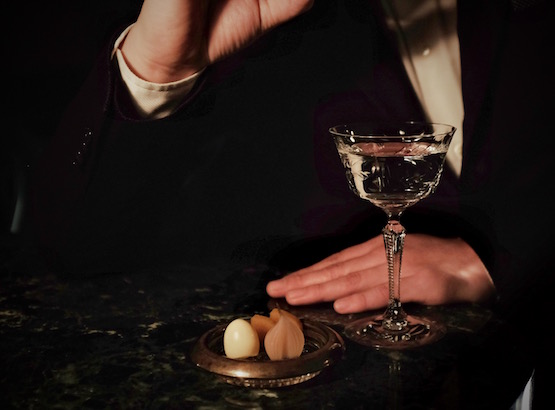 It’s hard to keep up with the number of craft cocktail bars sprouting up across Singapore these days. But when a world champion graces your joint as its first guest bartender, you’re probably already standing out from the crowd. Enter Gibson, the latest venue from serial bar entrepreneurs Gan Guoyi and Indra Kantono. The couple, who founded Jigger & Pony and Sugarhall in 2014, have, since last September, expanded their stable to five with the launch of three new venues – Humpback, The Flagship and Gibson – all located in the same restored shophouse along Bukit Pasoh Road (D Bespoke is a few doors down and The Cufflink Club looms nearby on Keong Saik Road). The three-spoked juggernaut combines an oyster and seafood bar in Humpback, a divey spot selling fine whiskies in The Flagship and a sky’s-the-limit 36-seater cocktail bar in Gibson, where 2014 World Class global winner Charles Joly guested last November. According to Kantono, Gibson is based on “some of the most successful attributes of Jigger & Pony” but pushes the cocktail-centric concept still further. “Jigger & Pony is a vibrant, lively space serving up the best of classic and classic reinventions,” he elaborates. “Gibson on the other hand is more intimate and private, serving up ‘limitless’ cocktails that are products of the highest craft.”

The boundless cocktail creation on offer is defined, however, by what mood you’re in. Designed around three occasions – Finding Comfort, Forging Friendships and Sharing Happiness – free rein is given to bar director Aki Eguchi to create drinks that reflect how you feel. “We felt it was the best way for people to understand our cocktails and pick a concoction based on their preferences,” he says. So drinks filed under Finding Comfort have “straightforward and recognisable flavours”, such as the signature Gibson cocktail (Hendrick’s gin, Monkey 47 gin and Dolin Vermouth de Chambery) that riffs on the classic by combining two gins and is served with a smoked quail egg and smoked tsukemono (Japanese preserved vegetables) on top of the usual pickled pearl onion. In Sharing Happiness, cocktails become more flamboyant, as with the Laid Backer (Sparkle Donkey reposado tequila, coconut cold brew coffee, salted vanilla syrup and pandan essence), served in a coconut shell. But with Forging Friendships, Eguchi truly gets audacious, with drinks such as the Copy Cat (Bulleit bourbon, Ardbeg 10-year, Nardini Rabarbaro, chocolate, Boker’s bitters and Brooklyn Lager). “The general principle when making a cocktail is to incorporate three components – a spirit, a citrus or sour component and a sweet component,” he says. “This drink defies this principle. It can be a polarising concoction; guests either love it or hate it.”

While some of Gibson’s libations confront your taste buds, the bar is meant to be a watering hole for everyone by banishing hoity-toity touches that pervade some craft cocktail bars. “It was always our intention to make the bar a fun experience and do away with stiff, formal service,” says Kantono. “So, while Gibson may look formal and polished, our bartenders are decked out in bow ties and shirts with Bermuda shorts so there is a relaxed element of fun when you come on any given evening.” More crucially, these people on the floor ultimately determine whether Gibson rises above the field of mushrooming competition that can vie for only so many drinkers within the Singapore market. “One of our biggest assets is our people,” he says. “From bartenders to servers, we have put together a team that is passionate about what they do, knowledgeable and dedicated to providing memorable experiences. That, topped with a commitment to deliver innovative experiences, puts us on a journey to accomplishment.”