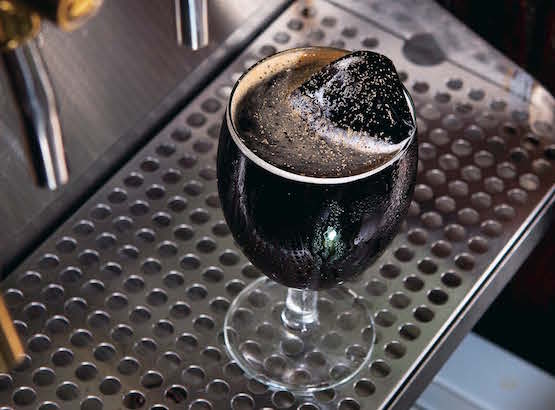 This recipe was first featured in our book excerpt feature of the Dead Rabbit Drinks Manual.

In the early 19th century, sangarees were made from wine or beer, plus sugar, water and nutmeg, and were considered a light beverage suitable for serving to children, the ill, and even those in recovery from alcoholism. Please follow your own moral compass regarding such service, but we can certainly recommend it to healthy, nondipsomaniac persons who have reached their majority. Originally featuring Spanish fortified wines such as madeira and sherry, the drink’s name comes from sangre, for its blood colour. (But not from sangria, which was invented later.) Perhaps the association with blood gave it a health context, or perhaps it was the inclusion of sugar, as in the julep, but in America, ale and porter became commonly substituted for quotidian imbibing. The molasses of the porter is lightened with use of lemon sherbet, and rounded with our herbal tincture and bitters. A “good and very wholesome Beverage,” as stated by the Boston Intelligencer in 1819. Try it on a hot summer’s day.

Add all the ingredients, except the garnishes, to a mixing glass. Fill with ice and stir until chilled. Strain into a punch glass with one chunk of ice. Garnish with freshly grated nutmeg. Twist the lemon peel over the glass to express the oils, then discard the peel.

*Lemon sherbet (about 720ml): 360ml lemon juice; 4 lemons; 1½ cups granulated sugar. Prepare an oleo-saccharum with the lemon peels and sugar (see method on page 29). In a small saucepan, combine the oleo-saccharum and lemon juice over medium heat, but do not boil. Slowly stir to dissolve the sugar. When the syrup has thickened, remove from the heat. Strain through a chinois into bottles. The sherbet will keep for 2-3 weeks in the refrigerator.

**Mace tincture (about 300ml): 135ml Everclear; 135ml water; 30g dried, pulverised mace. Combine the mace and Everclear in a jar. Allow to macerate for three days, then strain through a chinois into a fresh container. Add the water. Due to the alcohol content, this tincture should last indefinitely at room temperature.