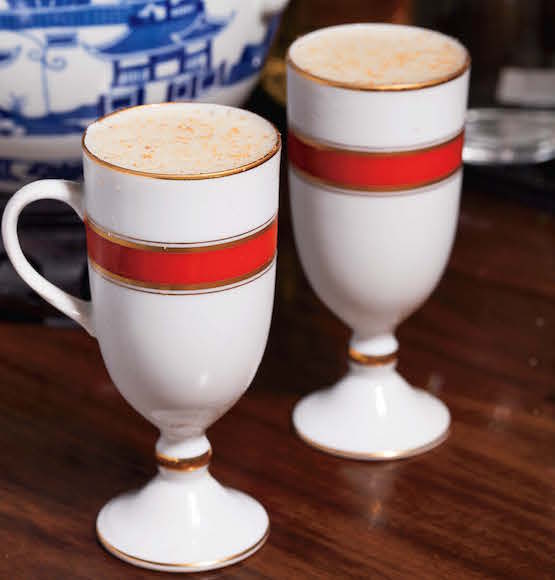 This recipe was first featured in our book excerpt feature of the Dead Rabbit Drinks Manual.

And now, a posset. Never before attempted on stage or bar! Or certainly not for a very, very long time. Posset history goes back to the 15th century, when the English made them from hot milk curdled by wine or ale. By the 16th century, cream, sugar, and eggs were used instead, and citrus did the curdling. In our Mulled Egg-Wine, a kind of universal posset appropriate to any occasion, elements of both periods are shown. Our version, however, is not curdled, and the lemon component has been reigned in to just the peels. But whether or not you have a posset set to serve it in, it’s a proud beverage in your repertoire from centuries past.

Combine all the ingredients, except the garnish, in a large mixing bowl and mix with a handheld blender. Pour into sherry glasses (or posset cups) and garnish with freshly grated nutmeg.

**Oleo-saccharum: 3 lemons; cup superfine sugar. Oleo-saccharum (or sugared oil) is the secret of great punch. Much of the flavour of citrus is locked up in the oil contained in its skin, not its juice. This simple process gets it out. Peel each lime, being sure to remove only the peel, with none of the white pith. A microplane grater or vegetable peeler is best. Add the peels to a bowl, along with the sugar. Using a muddler or heavy wooden spoon, press the peels into the sugar. You will see oil from the peels collect in the bowl. Let the combination sit for at least 30 minutes at room temperature. Mix to collect all separated oil into the sugar before using. You may use the peeled limes for juicing as needed in the recipe above.