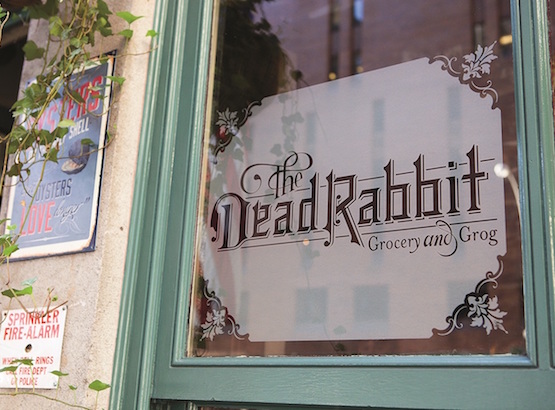 The men behind the award-winning New York bar, Sean Muldoon and Jack McGarry, resurrect and revitalise long-forgotten drinks in this extract from their first cocktail book.

Sean Muldoon is a bar mentor, one of the first of his generation to see the opportunities in the cocktail revival. He takes his place as a taste bud traveller in time, an adventurer of absinthe and sailor on the high seas of sours and slings, an excavator of elixir erudition, a man who made his mark on moonshine. Jack McGarry is the consummate barman in the flesh. It is he who tamed the tincture tiger and deciphered the lost language of the Ancient Cocktailians. Discovered after years of slumber in a block of hand-shaped ice in the basement of Jerry Thomas’s Exchange Saloon, he is said by some to be the only 19th-century barman alive today.

In both their establishments, both previously at the Merchant and now at the Dead Rabbit Grocery and Grog, the boys from Belfast have focused on historical drinks. At the Merchant, the emphasis was on the 20th-century heyday of British and European hotel bars, where travellers would encounter classics, perfectly made with meticulous detail. Once that was accomplished, they ratcheted up the challenge. At the Dead Rabbit, the drinks still come from history, but they are not the classics, they are the forgotten ones: drinks that have long since fallen out of fashion but can still teach us much about flavour and texture, not just as it was understood in bygone eras, but in ways relevant to our own tongues and nostrils.

However, even as we begin to create myths, let’s dispel one. While Jack and Sean are both meticulous barmen and bar historians, and their respect for their antecedents is at the core of everything they do, the drinks in their bars and in this book are not just instructions out of old books. They haven’t simply been selected and reprinted here. Everything in this book is an original recipe, though it was inspired by historical sources. As you will see, every drink listed in this volume includes the historical source material from which it was derived. But these recipes are all-new renditions, not only updated for modern ingredients and the modern palate, but enhanced, deepened, awoken through the inspiration of our authors.