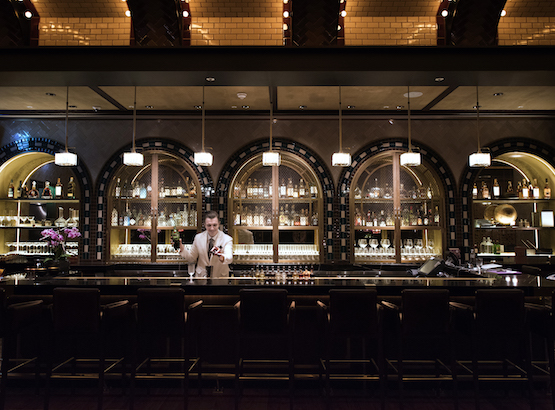 It’s virtually impossible not to bump into some sort of food and drink personality these days, whether it’s Anthony Bourdain eating, drinking and smoking his way through yet another exotic city, or Jack Maxwell downing camel milk vodka in Mongolia. But preceding all of them is the late Charles H Baker Jr, an American author who documented his huge appetite and unquenchable thirst as he travelled the globe in books like The Gentlemen’s Companion, An Exotic Cookery and Drinking Book and Jigger, Beaker and Glass: Drinking Around the World. Credited for cocktail recipes like Remember the Maine and Tequila Por Mi Amante, it was almost unavoidable before a bar was based on him. “Hidden” in the “lower level” of the new Four Seasons Seoul in the city’s Jongno Gu district, as the hotel’s website teases, the 80-seat Charles H bar is the latest homage to the glory days of cocktail consumption. Billed as “a nod to the Prohibition-era speakeasies of New York”, the skylights and walls lined with green and white subway tiles are unmistakably Manhattan, reminiscent of the regal but disused City Hall subway stop. Head bartender Christopher Lowder stresses that this isn’t another 1920s watering hole. “Charles H will be a ‘Prohibition-era cocktail bar’ but only because Charles happened to be travelling the world during the years of Prohibition,” says Lowder, who moved from New York to Seoul after stints at The Nomad Hotel, Booker and Dax and Amor y Amargo. “Drinking in New York was actually terrible during the 1920s because all of the good American bartenders fled the country to work in places like Cuba, Paris, London or Southeast Asia.”

The wanderlust that filled Baker, Lowder and many barmen drives the menu at Charles H, which kicks off with a section called “Cocktails around the world” of drinks inspired by the places and people Baker came across during his travels to New York, Shanghai, Cairo and Havana in the early 20th century. The Hotel Nacional (aged Caribbean rum, pineapple, apricot brandy, lime and Angostura bitters), for example, credits Wil P Taylor, then manager of the Cuban hotel, as its source, while the Kirsch au Cafe (cognac, fresh espresso, kirsch, cherry brandy, demerara sugar and egg white) comes courtesy of “a friend of Charles” in Cairo. Other drinks toast bartenders who currently hold court in these cities today, like the Mananita (joven mezcal, Campari, coffee, Italian vermouth and chilli), which comes from Joaquin Simo of Pouring Ribbons in New York, and the Shanghai Breakfast (aged Venezuelan rum, black sesame, honey, cinnamon, scotch whisky and cream) by Lu Yao from The Union Trading Company. But Lowder keeps a local vein running through many of his drinks. “Korean agriculture is incredibly rich, so I have many fresh fruits and vegetables to work with,” he says. “Even though Charles H is going to recreate flavours from the early 1900s, these Korean ingredients will have a major impact on the cocktails that we serve.” Hence the Korean chilli flakes that spice up the Mananita, native jujube and grape syrup in Bazaar Encounter (cognac, Hendricks gin, grape molasses, jujube, cacao, rosewater and seltzer), and the Korean pomegranate drinking vinegar that stands in for shrubs in Sins of the Flesh (white rum, pomegranate shrubs, Maurin Quina, lime and seltzer).

For the less initiated, the menu features two classic drinks, the Manhattan and the Daiquiri, but in the form of three flights and variations respectively, which Lowder says was in anticipation of a customer’s request. “At Amor, most guests would just drink bespoke cocktails, and so each guest would always ask for ‘something sort of like my last drink, but different’.” The Manhattan flight, for example, is first served in its original guise (rye whiskey, Italian vermouth, Angostura bitters and marasca cherry), followed by the Tipperary, which swaps the rye for Irish whiskey and the bitters and cherry for green Chartreuse and absinthe, and finally the Red Hook with maraschino instead of marasca. Having three closely related drinks also gives Lowder more control over quality. “One thing I learned working with Dave Arnold (at Booker and Dax) was that making a Manhattan ahead of time and bottling it gives you complete control over temperature and dilution,” he says. “You can get really nerdy with your recipe.” So he prepares three batches before diluting them them to 20, 22 and 24.5 per cent abv each, and served at minus 4C.

What’s the most refreshing, however, is the celebration of non-alcoholic cocktails at Charles H. In The Gentleman’s Companion, Baker writes of “a few rational souls who don’t care for anything containing alcohol”, and he offers some “mild mannered coolers” that “makes us feel very fine”. Lowder similarly adopts such an attitude. “Not offering delicious soft cocktails isn’t just bad business; it’s inhospitable,” he says. “People come to bars for all sorts of reasons, not all of which have to do with drinking the strong stuff. This is especially the case at hotels, and so I find it best to make sure that those guests who aren’t drinking alcohol to still have a menu of attractive cocktails to choose from.” And they do; under the appropriately titled “Temperance Delight”, teetotallers have four “Handmade Coolers” to choose from, like the West Indian Shrub (pomegranate, vinegar, honey, lime and seltzer) or the James Trotter (white peach, ginger, mint, lemon, cinnamon and seltzer).

Even with a bold menu, Lowder says the cocktails have been well received in town. “Koreans love drinks on all parts of the spectrum from fruity and refreshing to stirred and boozy,” he says. “I’m actually not adjusting any flavour balance to meet the market, because the market is just excited to try different styles of cocktails.” In fact, he reckons that local tipplers are ready for more. “Working at The Nomad Hotel, I saw so many international guests visit from East Asia and utterly fall in love with craft cocktails,” Lowder says. “Now I have an opportunity to bring that craftsmanship and a New York level of excellence to the bar community here in Seoul.” This sharing of drinks is a move that Baker would surely approve.

How to taste wine?