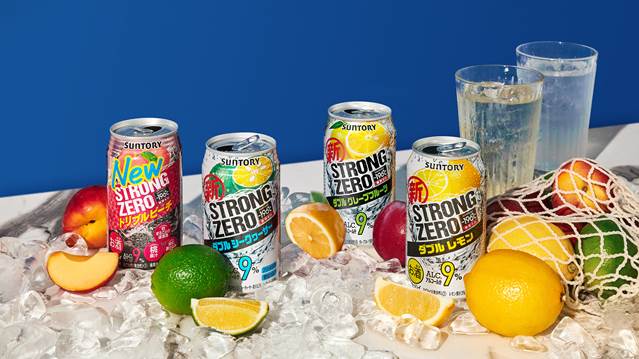 It was summer 2012, and I had just embarked on my first trip to Japan. I was rolling solo but happened to be in Tokyo at the same time as a friend, so we decided to meet in Harajuku Park. We grabbed some snacks and drinks on the way, and both not being beer drinkers, grabbed four tall boys of silver and blue cans with lemons and the word “STRONG” emblazoned across them.

We took our convenience store picnic to a bench in the park to people-watch, downing the cans quickly, owing to the fact it was the middle of a 37C heatwave. While we had acknowledged the “STRONG” wording on the can, we had unknowingly just necked almost a liter each of 9% abv chuhai. Exacerbated by the heat, we were absolutely hammered. And that’s where I fell in love with my first ready-to-drink (RTD) can.

The drink takes its name from a fusion of the words shochu – the Japanese spirit used as the base – and highball. The history of chuhai dates back to just after World War II, when Japan was in a depression, and ingredients for beer were sparse, whiskey was out of the question and the best rice was used for eating or making sake, meaning substandard rice was distilled into shochu.

However, shochu itself is well over 500 years old, with the word first being discovered on a wooden tag. It’s unknown as to exactly how shochu first came to Japan, but theories include trade routes from Korea and China.

The most solid and agreed upon theory is that the trading hub of the Ryukyu Kingdom – now Okinawa – came across distilled spirits through trading with Thailand, eventually creating their own spirit known as awamori, distilled from black koji and Thai rice. It eventually spread to the mainland, including Kyushu, where the largest number of Japan’s shochu distilleries are located.

While sake and shochu are both traditional Japanese alcoholic beverages, there are differences that set them apart including the manufacturing process, alcohol content, ingredients and how they’re served. Shochu is single distilled, whereas sake is brewed. This means it has a lower alcohol content than shochu. Sake tends to be around 13 to 16%, but shochu has a higher average alcohol content of 25 to 37%.

When it comes to ingredients, shochu is made from koji and a base ingredient such as rice and sweet potato. However, there are over 50 known base ingredients, and other common bases include barley, brown sugar, and buckwheat. On the other hand, sake can only be made from rice. Shochu also far outsells sake in Japan, which is impressive considering there are over 1200 sake breweries in Japan, but half the number of shochu distilleries.

In the scarcity and desperation of post war Japan, shochu was mostly unregulated, distilled at home and more akin to moonshine, calling for the addition of soda water to make it more palatable. Drinkers then began jazzing up their chuhais with other flavourings like syrups, teas and juices. A handful of bars in Tokyo’s Sanya neighbourhood claim to have invented chuhai – which would make sense as the area was known for blue collar workers, cheap rent and brothels – but its exact origin remains a mystery.

Things changed for shochu’s image in 1980, when Crystal Jun Rock shochu recruited David Bowie to appear in a commercial for their product’s new packaging, featuring his song Crystal Japan. That same year, a brand called Hakusuisha launched a carbonated lemon mixer called Hi-Sour, meaning chuhais could be easily made at home, making them even more accessible which led to a spike in popularity.

Shortly after in 1982, Suntory launched a product called Mild Vodka Juhyo. The liquor was actually a continually distilled shochu as opposed to vodka. Suntory believed calling it vodka gave it a sophisticated edge that would appeal to a younger generation of drinkers. It’s worth noting the irony of Suntory’s vodka labeling choice, as nowadays most canned chuhai products are made with vodka as there’s no legal definition for what makes a chuhai, and it keeps the cost down. The following year, canned RTD chuhais as we know them now hit store shelves across Japan.

Nowadays, chuhai is extremely popular with young drinkers, and one of its main selling points is that it’s cheaper than beer due to its lower tax rate. One thing all RTD chuhais have in common is that they are less than 10% alcohol, to avoid that dreaded tax. The standard abv for chuhai is regarded as being 5% alcohol, while high or strong ranges from 7 to 9%. Abv also varies depending on flavour – boozier chuhais tend to be strong citrus flavours, whereas fruits such as grape, apple, and peach are more delicate, so use less alcohol.

At the risk of sounding sponsored, my personal favourite canned chuhai is Kirin’s Hyoketsu range, especially Sicilian lemon flavour. Hyoketsu means frozen and I recently discovered the naming doesn’t just mean they’re best served ice cold – it’s because the fruit used is squeezed without concentrate then immediately frozen, supposedly giving the chuhai a fresher and more realistic taste. I also recently discovered this is one of the vodka-based chuhai RTDs, meaning my whole gateway into loving chuhai RTDs was a lie…

Get to know: Sidecar