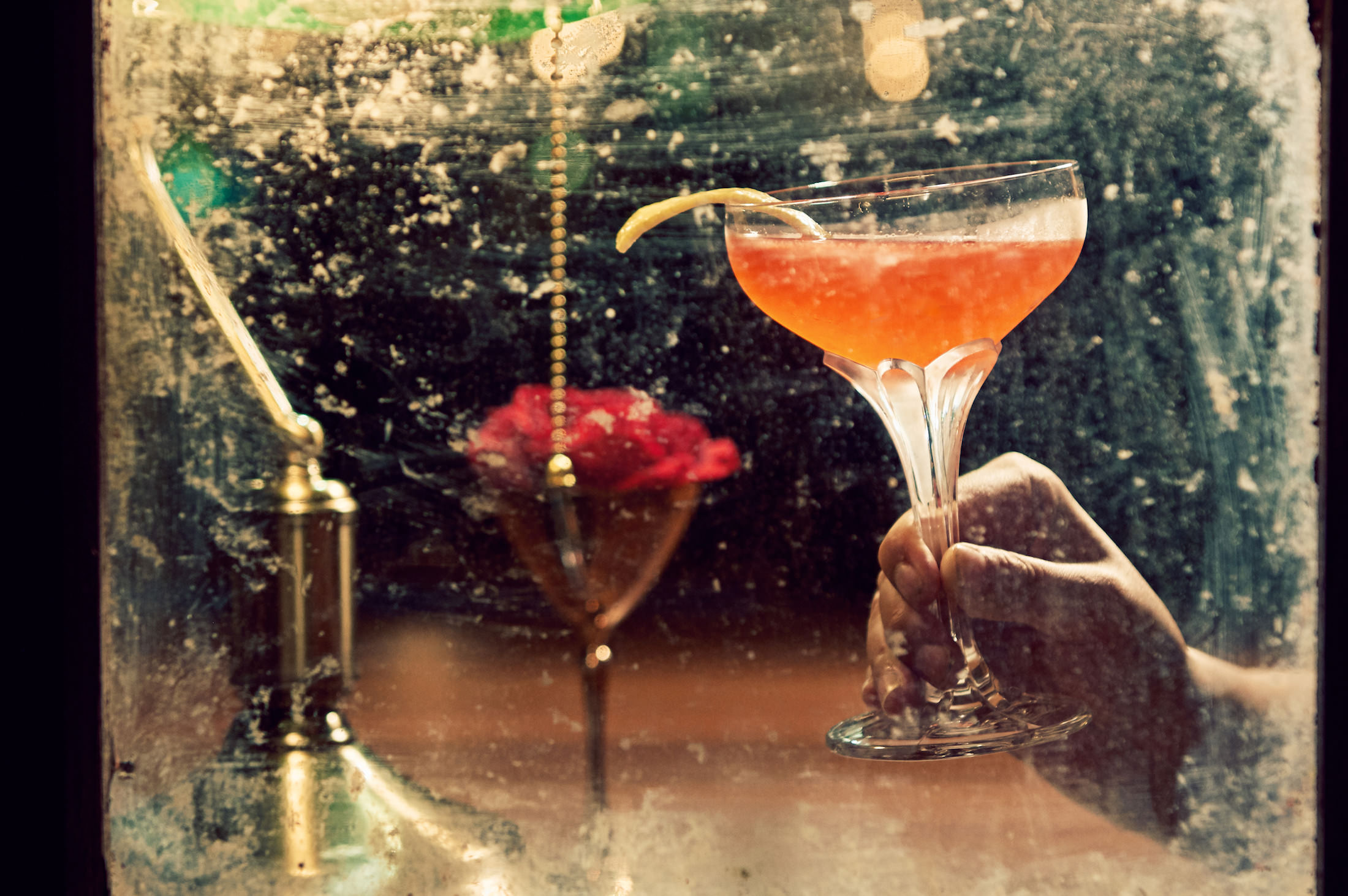 An Apple Martini from the Belle Epoque. By Seamus Harris.

Fruit brandies suffer unjustifiable neglect, and perhaps none more so than calvados – France’s famous apple eau-de-vie. Raise the ante with calvados as a base and new worlds open up. Factor in the drinking public’s lack of acquaintance with the spirit of Normandy and it can become your secret weapon.

David A Embury, New York lawyer and cocktail expert, outed himself as an apple brandy fan in his 1948 classic The Fine Art of Mixing Drinks. Noting how switching base spirits in existing formulas can create new cocktails, he suggested experiments with apple brandy. The core chapter of his book focused on six foundational drinks. Five would turn no heads today – namely the Martini, Manhattan, Old Fashioned, Daiquiri and Sidecar. But the sixth, the Jack Rose, is a different matter. Now barely known outside craft cocktail circles, even in Embury’s day it must have seemed an unusual selection. I suspect Embury was consciously making a wild card tribute to applejack, America’s original indigenous spirit.

The Jack Rose is simply an apple brandy sour, made a little fancy with grenadine. A New York invention, the drink nevertheless has a rural feel, luring the drinker on a ramble through New York’s fruit-growing hinterland. Besides the obvious apples, there are hints of cut grass, berry fruits and blossoms – particularly when using a good calvados. The original Apple Martini, this is unlike the one-dimensional, artificial drinks most associated with that name. Absolutely delicious, the Jack Rose is all the reason you need to stock apple brandy.

Various explanations exist for the name, mostly involving individuals nicknamed Jack Rose. The earliest written mention of the drink credits a bartender called Frank May, who supposedly had an alternate floral moniker. Another story, implausible yet oft repeated, associates this aperitif with “Bald” Jack Rose, a notorious gangster and gambler who turned informant in a famous pre-Prohibition murder trial. Thing is, the cocktail was famous before the gangster. Some suspect the drink simply references a rose cultivar called the General Jacqueminot, named after a Napoleonic general but anglicised and abbreviated to Jack Rose. The earliest long-stemmed rose, the Jack Rose was hugely popular with late 19th-century florists and had a deep pink-red blossom that resembled its namesake cocktail. Albert Stevens Crocket, writing in Old Waldorf Bar Days (1931), supports the General Jacqueminot theory.

A solidly pre-Prohibition drink, the Jack Rose’s peak of notoriety came in 1912, the year New York drinkers dissected the Rosenthal murder case. The victim was one Herman Rosenthal, who had unwisely complained that corrupt police were squeezing too hard for a share of the profit on his illegal betting shop. Days later he was gunned down by members of the Lenox Avenue Gang while leaving the fashionable Hotel Metropole. The real scandal, and the cocktail connection, came in the subsequent trial, which saw “Bald” Jack Rose (Jacob Rosenzweig to his mother) turn witness for the prosecution. The outcome was that the New York Police Department’s very own Charles Becker went to the electric chair for murder. The press fed fascinated readers every last detail, however irrelevant. There were stories of frustrated florists struggling to offload bouquets of jack roses that romantics refused to touch, and of confusion in cocktail bars. Cautious bars rebranded the Jack Rose as the Royal Smile – strictly speaking the Royal Smile was a variation with a dash of gin, essentially a Pink Lady with extra apple brandy.

The Rosenthal murder case was so infamous that F Scott Fitzgerald wrote it into The Great Gatsby. A character mentions having been at the Hotel Metropole on that infamous night. The Jack Rose offers more than mere nostalgia though, being worthy of a place in every bar. If nothing more it will lure Apple Martini drinkers into more interesting waters.

1905The National Police Gazette publishes the first written reference to a Jack Rose cocktail. America’s first men’s magazine, the National Police Gazette specialised in sports and crime, enlivened with titillating illustrations of everything from dismembered bodies to brawling femmes. Drink naturally featured too, and an April 22 piece entitled “An Athletic Mixologist: Wise Bartenders will Get Good Tips in This Column” ran as follows: “Frank J May, better known as Jack Rose, is the inventor of a very popular cocktail by that name, which has made him famous as a mixologist. He is at present looking after the managerial affairs of Gene Sullivan’s Cafe, at 187 Pavonia Avenue, Jersey City, NJ, one of the most popular resorts in that city. Mr May takes an active interest in sports, and as a wrestler could give many of the professional wrestlers a warm argument.” Sadly, no recipe was given.

1908The earliest surviving recipe for the Jack Rose, from William “Cocktail” Boothby’s The World’s Drinks and How to Mix Them, instructs: “The juice of one lemon, one part grenadine syrup and two parts Apple Jack. Shake well with cracked ice, and strain into a cocktail glass.” This time the drink is credited to another obscure New York bartender called RH Townes. Boothby lived and worked in San Francisco, so by this time the drink was wetting tongues across the United States.

1910sThe decade preceding Prohibition is the Jack Rose’s heyday, with the drink appearing in numerous cocktail manuals. Interestingly, it is also one of the first American recipes to feature grenadine. Grenadine was then a slightly exotic ingredient loosely associated with France, where more delicate young ladies might sit out the aperitif hour with a grenadine lemonade. Grenadine gradually displaced raspberry as America’s favourite red fruit flavoured cocktail syrup, though for a time the two seemed virtually interchangeable. For example, the 1910 edition of Jack’s Manual of Recipes for Fancy Mixed Drinks and How to Serve Them by Jacob A Grohusko contains a Jack Rose that uses raspberry syrup.

1926The Jack Rose makes a cameo appearance in The Sun Also Rises, the bullfighting novel that launched Ernest Hemingway to literary superstardom. Protagonist Jake Barnes recounts: “At five o’clock I was in the Hotel Crillon, waiting for Brett. She was not there, so I sat down and wrote some letters. They were not very good letters but I hoped their being on Crillon stationery would help them. Brett did not turn up, so about quarter to six I went down to the bar and had a Jack Rose with George the barman.” But drifting around Europe with the Lost Generation proved something of a last hurrah for the Jack Rose. The applejack industry could not just skip the country to dodge Prohibition, and the few producers to survive the dry spell were slowly sucked into a negative spiral of compromising quality to compete with cheaper spirits like gin, bourbon and eventually vodka.

1948 With the Jack Rose largely faded from public consciousness, David Embury mounts a rearguard action to save a popular drink from his youth. Results do not come in his lifetime, but by listing the Jack Rose among his six foundational recipes, he plants a seed for future generations. Over half a century passes before his time capsule bears fruit, but, like a latter day Johnny Appleseed, Embury’s beneficent foresight eventually guides us to the ultimate apple cocktail.