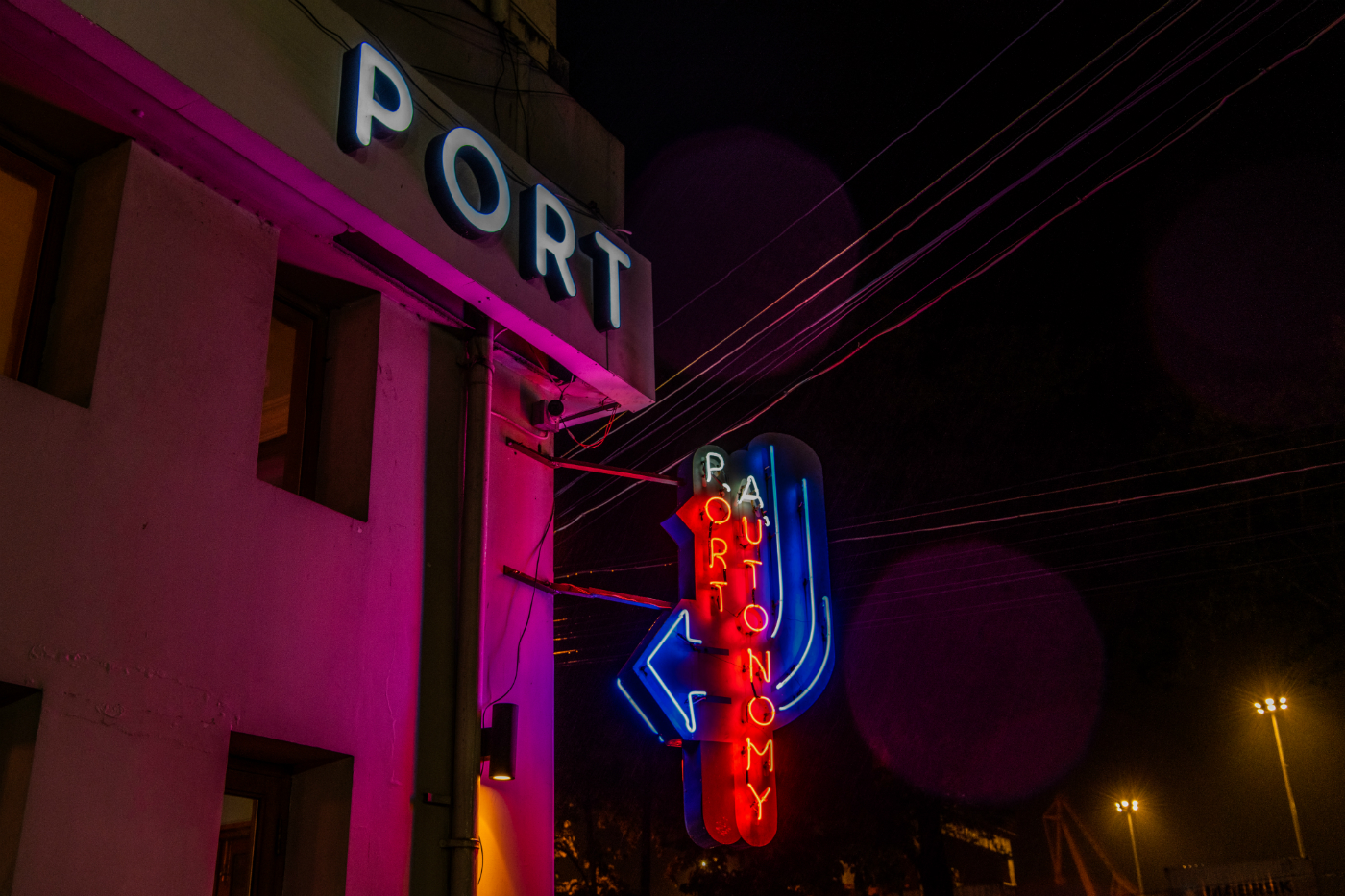 In its third and most permanent space, Port Autonomy is driving Yangon’s f&b scene forward. By Holly Graham.

Rewind to Yangon 2014. Bars were few and far between, aside from stuffy hotel bars or roadside beer stations, but Port Autonomy (PA) – a rowdy riverside shack next to Yangon’s Port Authority on Lanthit Jetty – was a place for everyone to come together and party with strong drinks and wild nights. The brainchild of Ivan Pun (Pun and Projects) and chef Kevin Ching, PA is now in its third and most permanent iteration, under much guidance from Jen Queen, beverage director of Myanmar bar consulting firm 57 Below. Known for her role in bringing up Cambodia’s bar scene, Jen is equally known for her commitment to Yangon’s scene – after she visited for a guest shift three years ago, she fell in love and is now in it for the long run.

Jen delivers a history of PA, explaining, “It got so much attention that it outgrew itself. It ended up moving to a mansion with an outdoor space, which the founders knew wasn’t permanent, but they just wanted to keep the brand and the vibe alive.” After that closed, the team took some time to think about phase three while building up Yangon’s f&B community. “You need more than one house to build a neighbourhood, and you need more than one neighbourhood to build a community. We’ve spent a long time getting rid of the notion of competition in the city,” she says.

It’s in this third incarnation that Jen and the 57 Below team partnered with Pun and Projects to bring back PA and close their other bar, Union, so PA would have a home. “Union has always done well and the vibe we wanted PA to have was already there. But there were lots of transitions, so we didn’t want to dilute what was an iconic spot in Yangon, and so decided to close Union to make way for PA.”

Jen explains that Yangon’s stance on value has shifted somewhat: “There was a crazy influx of foreign trade and business, so people were splashing out with company cards and weren’t so cautious. But due to the obvious political issues, we’re not seeing that so much of that now, and lots of businesses are pulling out. Yangon is still considered to be in a stage of growth, but we’re not seeing that surge of money at play like we did before.” This brought Jen and the PA team back to the idea of having fun, but at good value.

After closing down Union, the space was remodelled and decked out with elements that throw back to the original PA, such jetty-like sheets of corrugated metal on the roof with lots of local textiles, original colonial floor tiles and a huge map of Myanmar. “I like to think that PA bridges the gap between Burmese beer house and expensive expat businesses. We want locals and expats alike to jam, and I think we’ve hit the mark on that,” she explains. “Union always felt a lot more tailored, but you can dress however you want at PA. Businessmen and locals in their 20s are raging together and it’s a great energy.”

It’s like visually remastering a Disney classic: you pay respect to the memories that you have but ensure they’re made with quality

One challenge Jen faced was the fact that she had never been to the first two PAs, so initially lacked that sense that nostalgia. “Out of respect, I looked over the old cocktails and improved the methods, techniques and ingredients. It’s like visually remastering a Disney classic: you pay respect to the memories that you have but ensure they’re made with quality. That way the nostalgia isn’t damaged, so when you come in wanting a PA original, like Return of the Jetty or the Angry Apple, we have it – it’s different, but it will live up to the memory that you have.”

Jen explains that the drinks are extremely ingredient-driven, as she has to see what she can find at the local market and let that steer her program. “I use a lot of culinary techniques in my production – especially because we don’t have much distribution here, thus no brand dollar to pay for equipment. We have to get good quality ingredients and then drive the drink more than the spirit.”

In Myanmar, it’s technically illegal to import foreign liquor, but lots of hotels can import their own spirits due to old laws. Companies that are producing spirits in Myanmar have such huge consumption levels that they don’t want other brands coming in to challenge them. Jen explains these attitudes make it really difficult to express that better spirits mean better bars, which improves hospitality, and consequently tourism.

Even products such as Luxardo cherries are hard to get in Myanmar because their labelling makes them look like an alcohol product. “If we try bringing them in and they get confiscated, it’s a huge expense,” she says. But Jen has figured out ways around challenges such as this. “We have someone who brings us in sour cherries, so we break down the juice, then make our own tapioca pearls and poach them in the juice of cherries with a little bit of kirsch to make cherry pearls. We just try and be creative and make what we can’t find.” Fortunately, she says they’re blessed with produce such as beautiful single origin coffees, unique local honeys and fresh produce. “When we look at what we do have, we’re spoiled for choice.”

She calls PA’s menu tiki-ish, because as exotic as Myanmar can be, the monsoon season can be grey and depressing. “Tiki was built on an escapist fantasy to feel that forever vacation. When I pitched the idea of tiki-ish, I was actually highlighting the four plus months of grey, wet weather that everyone wants to escape. The ingredients in our market are predominantly tropical and we always have pineapples, coconuts and passionfruit throughout the year – but, as much as I love tiki drinks, they’re so wasteful.” And like most, Jen didn’t want a wasteful program, and so delved into the idea of minimalist tiki.

The idea resulted in a menu section dubbed Monsoon Tropical, with ten drinks that are easy to make all year round. “Garnishes are also wasteful and tiki relies on them, so we’ve partnered with a company called Chu Chu, who specialise in upcycled goods,” she explains. “We commission what we need from them by sending them photos of paper garnishes, then they recreate these using recycled paper and a film from recycled plastic, so we can use the garnish over and over.” In Myanmar’s culture, the notion of zero waste is common in anyway: “When I tell my local staff we’re going to do zero waste, they’re like, ‘that’s how we live anyway, we don’t throw stuff away!’ It’s not a new concept I need to teach.”

Jen goes on to explain that though Myanmar has taken considerable steps to make changes with plastic, it doesn’t have the same dependency on it as other places – when plastic began having its heyday, the country wasn’t so connected to its use, and so it hasn’t been convenient for very long. “If I go to the market and tell them I don’t want a plastic bag because it’s bad for the environment, they say ‘that’s fine, we’ll go straight back to the banana leaves we used to use!’ Other countries are much further ahead in their reliance on the convenience of plastic, so when you try to take it away, it’s almost an assault. Here, that’s not the case.”

Of the food, Jen says: “It’s humble and wholesome, but also quirky and at times overly confident – I would say the same about the bar program.” Chef Kevin Ching continues to serve up a menu that avoids labels or categorisation, but is what he calls “a fun, eclectic, seafood-forward Asian fusion menu.” Korean, Vietnamese, Chinese, Japanese and various other Pacific Rim cuisines were intermixed on a daily basis for Kevin, something which comes through in the menu. “I’m not afraid of the word fusion in a way that I think a lot of chefs are, as I grew up in Hawaii, which is quite possibly the epitome of a fusion culture,” he shares. Much like the cocktails, PA has accumulated some cult favourite dishes along the way, such as their burger, kimchi quesadilla and gochujang carnitas Cuban sandwich, and these aren’t going anywhere.

When it comes to its environment, PA has made no secrets about the fact it’s a safe space, especially for the LGBTQ community in a country where same-sex sexual activity is illegal. “We party unabashedly in a place with floor to ceiling windows. Usually that only happens in late night, underground bars,” says Jen. “Our first LGBTQ night had over 500 attendees. Illegal it may be, but Yangon wants to be accepted regardless of what the laws state – 500 people prove that. The laws are in place to keep the old guard appeased – but no one’s ever stopped me on the street and said: ‘You’re gay and that’s against the law’, and I’m very open about the fact that I’m gay.”

Jen says there are plenty of people around her work environment that are LGBTQ or proud allies, and their event raised money for Colours Rainbow, an LGBTQ youth group. “I’m working with them to choose a few local candidates for job placements, because a lot of LGBTQ people – especially butch women – aren’t able to get jobs. They usually take hard labour jobs and only get half pay because they’re women.” PA doesn’t have any female bartenders, as it’s seen as a shameful career to choose in Myanmar – but if you’re estranged from your family for being LGBTQ, PA will be your family. “I’m looking for very specific candidates that I can train, help grow and give better wages while they’re having a great time and being part of a community.”

“We’re really working on making PA everyone’s home,” Jen says. “There are so many hotel bars that give service to hotel guests, but they’re not catering to pockets of the city or side-lined communities and creating a space for them to feel at home and safe. We are.”

She says a lot of that feeling and inspiration comes from The Pontiac in Hong Kong. “I would like to think that people that run LGBTQ programs are likeminded people, but Beckaly Franks does it in a much different way. She’s loud and proud of it, and it’s inspiring seeing the huge risks she took that ultimately led The Pontiac to become a haven for misfits, and it’s encouraged people to move forward in Asia.”

Jen is well aware that Myanmar is still developing, and waiting for distribution to do bigger and better things. Still, the scene is seeing changes with PA finding a permanent home, and the gradual reopening of the Pegu Club. Other global brands will help drive Myanmar forward and start the right conversations about distribution, and with the Peninsula and Rosewood set to open in Yangon, this could happen sooner rather than later. “Our market is not oversaturated by any means. I’m lucky in that I’m free to consult and help grow the industry. We’re slowly partnering with brands to do launches where we provide free-of-charge, open house community education in return for product. Most of Asia is afraid to do stuff like that because it’s seen as training the competition as opposed to being collaborative. But the more friends you make, the more peer support and people you can share ideas with. If you want to go fast, go alone, if you want to go far, go together.”