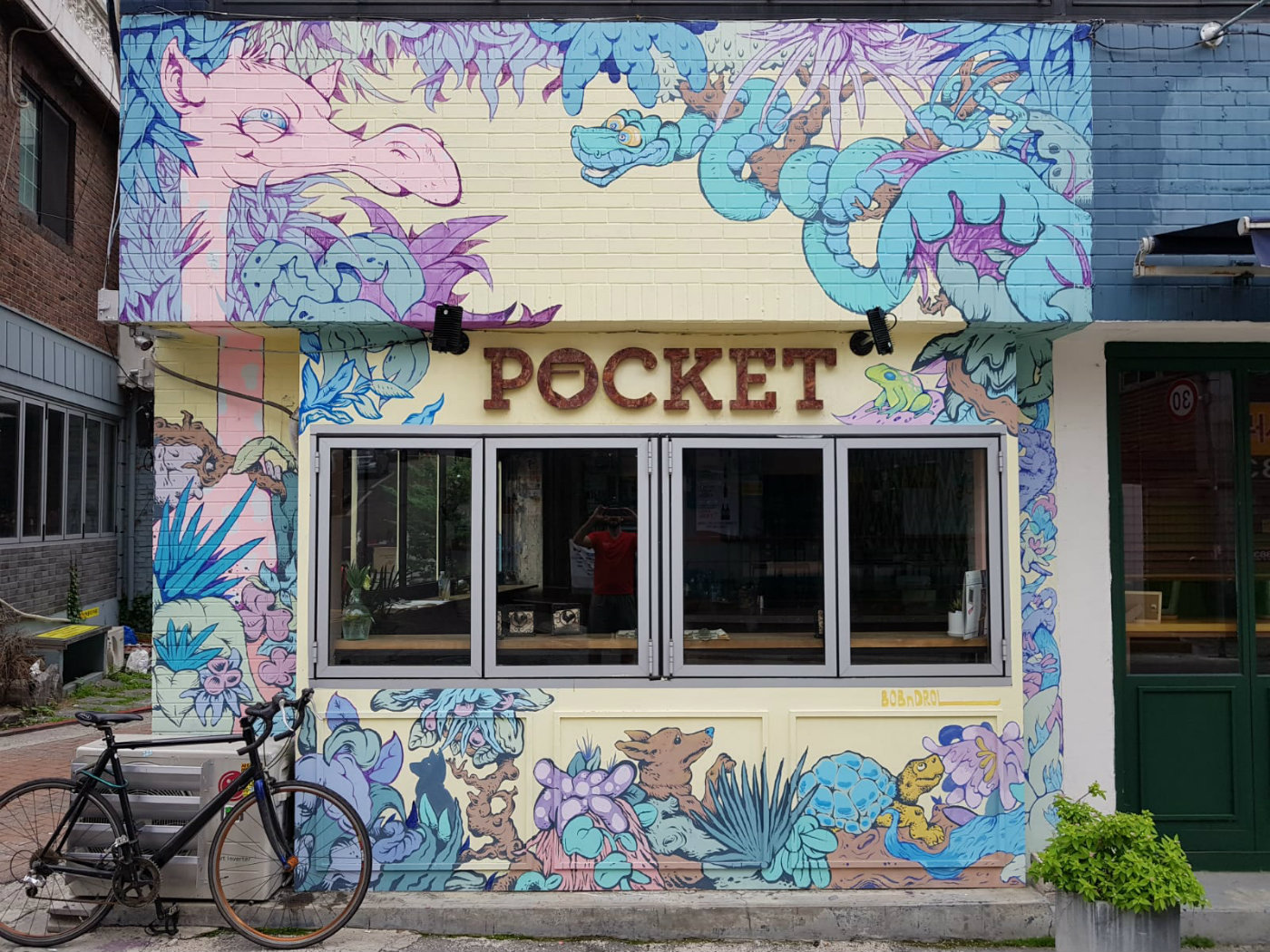 Phil Abowd, co-owner of Southside Parlor in Seoul’s Noksapyeong neighbourhood, is the first to admit that the Texan bar took locals some getting used to when it first opened five years ago. “We were ahead of our time serving craft cocktails in fairly casual surrounds,” he explains. “Back then, locals didn’t mind paying the prices we were charging, but only in fancy-looking bars. Eventually, people appreciated our tasty drinks, didn’t mind the price and began to understand what we were about, albeit a fair while after the expat crowd.”

Once again, Abowd and his team are ahead of the curve, opening Pocket in nearby Haebangchon. Abowd explains: “Sustainability isn’t really a thing in Seoul, so we wanted to introduce it to the bar community here. We were really inspired by Trash Tiki when they visited last summer, and I decided to nudge Southside in that direction afterwards.” Inspired, and with a little more advice from Trash Tiki, Abowd applied some of their tips to his new bar program, including vac-packing all Southside’s single use ingredients (such as lemon peel and spices) as a stockpile ready to re-use for when Pocket opened.

Abowd began sharing these ideas with other local bartenders and quickly realised sustainability wasn’t a conversation that was happening within the local f&b community. “Hardly anyone showed up to Trash Tiki’s seminar compared to a famous New York or Japanese bartender. I started to see the disconnect between the Korean bar community and what they were valuing. They value showmanship – which is great – but no one was pushing more progressive concepts. I thought if no one else is going to value sustainability, why don’t we lead the way?”

I saw the disconnect between the Korean bar community and what they were valuing. I thought if no one else is going to value sustainability, why don’t we lead the way?

And so, Pocket was born. A highball bar that focuses on environmental, social and economic sustainability. Abowd took five years of learning from Southside and distilled that into what he and his team felt Seoul needed, which, he describes, is, “A community bar that gives back, highlights local talent and charities and pushes us to think about food and beverage waste.”

Abowd points out that beyond Southside and Charles H, sustainability isn’t practised in Seoul’s bars. “I’ve never heard anyone talk about it. I guess it makes Pocket a first-to-market thing for Seoul. Sustainability hasn’t hit the Korean market as a trend yet, let alone a vital need.” So, how will Pocket connect with an audience? “There’s nothing here that doesn’t connect with any human being. With Southside, it’s very American so it was a bit of a strain for Korean customers as they weren’t used to it at first. We don’t have that barrier at Pocket as it’s not high brow or region specific. We built the concept so that anyone can walk in and have a great experience.” Abowd insists, however, that they’re not trying to be a bastion of sustainability and force education down people’s throats. “We’re there to answer questions, not to spiel on them. But there are elements that will trigger questions – we have an aquaponic system on the back bar, soju bottle glass and seashells mixed to create aggregate for the bar top and the menu uses words like ‘coffee stock’ and ‘re-spiced rum’ so we hope this will prompt discussion.”

The highballs here are punchy and flavoursome, different to what Abowd calls your usual “elegant and lighter ones”. One of the current best-sellers is Purple Drank, an ode to the vividly purple grape soda Abowd would enjoy in his hometown of Houston, Texas. On how the recipe came to be, Abowd says, “I had a lot of cucumber seed centres leftover from garnishes at Southside, so I infused them and other cucumber offcuts into gin. The blackberry and lavender syrup uses re-dehydrated and re-infused lavender that we first infuse for a cocktail at Southside. We also make a grapefruit stock using the fruit’s skin and reduce the bitterness.”

Sustainability is not an all or nothing thing – every little thing you do helps.

One of Abowd’s favourites is the Hey Arnold!, homage to the cartoon and a play on the Arnold Palmer using sweet tea syrup that reuses teabags two to three times and a lemon stock made from skins. Working with local bars and restaurants allowed Abowd to collect the bottle glass and shells for the bar top, and also allowed him to connect with a local coffee roaster. “They set aside their used grounds for us which we then use for a stock and mix with cola syrup, mole and re-spiced rum using spices dried out from Southside that still have a ton of flavour.”

Pocket also gives back to the community, donating ten percent of profits to local charities which change every month – a percentage Abowd hopes will increase as the bar grows – and lets charities use the space for talks and workshops. The bright and airy bar may be small but the decor, as Abowd explains, is playful with underlying tones that reflect the concept. “We had some local artists paint a mural of a psychedelic rainforest 100 years in the future to reflect what we want the planet to look like then. Inside we have floral wallpaper and light pink walls. The windows open out and the bar becomes fresh, bright and alive with real plants and bright colours.” Paying his respect to the building’s original fixtures, Abowd decided to keep one wall in its original state. “In the 1970s, the space used to be a fruit and veg shop and we discovered the old rolling steel gates with a hand crank. There’s a lot of ‘eye to the future’ stuff going on at Pocket but this one wall is the foot in the past – the bones of the building reminding us where we came from.”

Abowd hopes Pocket will create a template for people in other pockets of the world to create their own version. “We plan to expand and create Pocket Busan and Jeju here in Korea then hopefully Pocket Hong Kong, Singapore, Tokyo, Paris, Houston and push the concept globally. Everyone has access to their community and waste ingredients like we do, but each Pocket will reflect its neighbourhood.”

On whether Abowd has any concerns about naysayers, he says, “Ian (Griffiths of Trash Tiki) told me ‘People will always come at you and tell you you’re not fully sustainable and this and that. But you’ve just got to tell them to fuck off, because at the end of the day, you do what you can do, and that’s better than nothing.’ And we are doing what we can and when we have the resources to do more, we will do more. Sustainability is not an all or nothing thing – every little thing you do helps.”