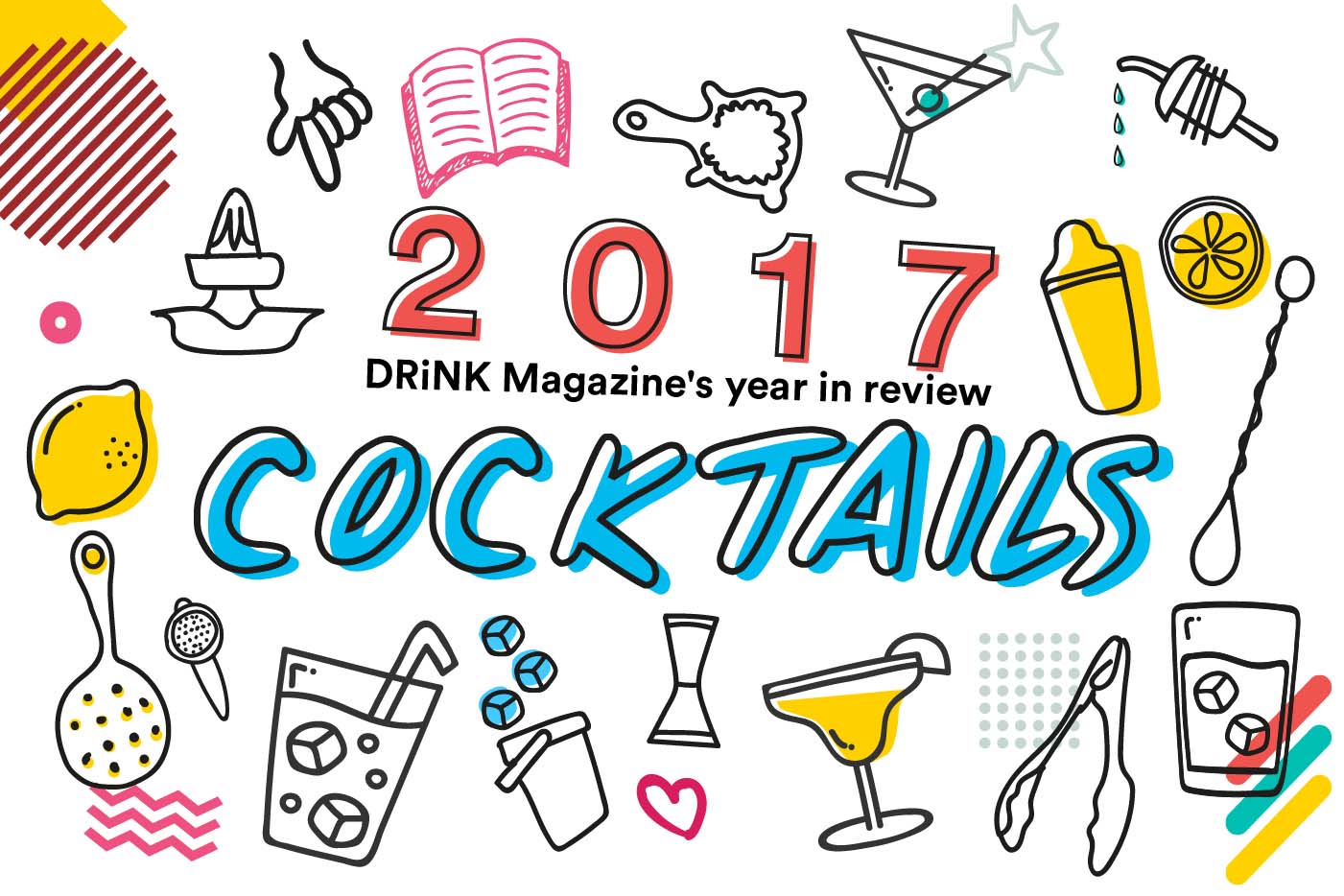 The sips we swooned over in the last 12 months. We’ll have ten more of the same, bartender!

As the year fades out to a new one, we’re taking a look back at everything that made a difference to our lives over the last 12 months. Today it’s drinks. Simply put, these are 17 of the DRiNK team’s favourite tipples sampled in 2017.

A few qualifications first, please note: we can’t guarantee these drinks were all first conjured up in 2017 (so don’t put them in a time capsule or anything), but this is when we tasted them. We also haven’t included wine or beer, just liquids (mostly cocktails) created and served up in front of us. So, in no particular order, here’s what delicious looked like in 2017: 1 Hossu, by Phoebe Han, Healer, Shanghai
Han prescribes a number of signature serves made with traditional Chinese liquors said to have healing properties. This is based on rye and fenjiu, one of the two-sub categories of light aroma baijiu, which she infuses with 12 ingredients such as clove, dried tangerine peels and other plants commonly found in traditional Chinese medicine. For a drink that’s heavy on deep, dark flavours, this cocktail is deceptively light. Jethro Kang

2 The Forest Cocktail, by Hiroyasu Kayama, Ben Fiddich, Tokyo
The drink was very definitely created before this year but we first had a taste at Singapore Cocktail Festival in 2017. It’s super herbal, and so bracingly fresh it feels like munching leaves straight off a plant. If the notion of grazing in a herb garden appeals, head to Ben Fiddich in Tokyo for the pleasure. Natasha Hong 3 Atlas Martini by Roman Foltan, Atlas, Singapore
The best new bar in Asia (in our opinion), Singapore’s Atlas prides itself on a carefully curated and possibly world-record-holding gin selection, so it makes sense the signature Atlas Martini is a pillar of their menu. We could almost have chosen one of the bar’s show-stopping non-alcoholic cocktails, but we’ll lean towards this blend of champagne vinegar, aperitif wine and gin, that perfectly sums up both the simplicity and elevation of execution that marks Atlas out so brilliantly. Dan Bignold 4 Rooster Me Luck, by Simone Rossi, Aqua, Hong Kong
Full disclosure: we didn’t actually taste this yet. But as a celebration of Chinese New Year that actually kicked off what’s now a very on-trend technique for garnishing (printed rice paper), and as surely the best-looking drink on planet earth in 2017, we just had to include Aqua’s mix of gin, Cocchi Rosa, matcha, lemon, yuzu and Chinese white peach puree. Easy on the eye doesn’t do it justice. Jonathan White 5 Pina Colada 2.0, by Shingo Gokan, Sober Company, Shanghai
Of all the clever creations at Sober Company’s upstairs bar, this re-look at the Pina Colada succeeds in being both sweet and crisp, delicate and palate-grabbing. It’s a magnificent feat of flavour capture, and an absolute pleasure to sip, then sip again, then just drain the whole damn lot – which is why it’s the best thing I drank this year. DB

6 The Alley, by Minh Tan Pham, The Alley, Ho Chi Minh
Ho Chi Minh punches above its weight on this list. The first mention goes to the bar’s eponymous The Alley cocktail, featuring an infusion of o moi, a long, pod-like fruit popular in Minh Tam Pham’s hometown that yields a sticky, brown pulp. Steeped in vodka for 10-15 days, it breathes like fish sauce and mellows out into deep meaty, sour plum flavours, which Pham balances simply with lime juice, simple syrup and house-made bitters. “There are a lot of bartenders around the world like Marian Beke using hard-to-find ingredients,” Pham smiles. “I’m thinking like, I have to find something they cannot get.” NH 8 Roasted coconut, at Quan Ut Ut, Ho Chi Minh
Like the heads of bald men with painfully bad tans, these are the cooked coconuts served at Quan Ut Ut, a chain of American barbecue joints wildly popular with the Viet set in Ho Chi Minh City. Co-owner Tim Scott said that, on a whim, the team decided to throw coconuts into the dying embers of their pits, “Just to see what would happen.” Well, the gentle heat seems to curiously enhance the creamy texture of fresh juice with the deep sweetness of gula melaka-like palm sugar and an added breath of smoke. NH 9 Caramel Cold Brew Boutique, by Terry Kim, Alice, Seoul
Solera sherry? Aquafaba? Cold brew coffee? All of the above in what seems like a hipster cocktail checklist but actually manifests as a mighty fine re-up of the Irish Coffee from Seoul’s finest. Opa, Cheongdam-style. JW 11 Memory of Geisha, by Courage Cheung, Chez Maurice, Shanghai
Using a kombu seaweed and shiso leaf infusion (in vodka), plus Cocchi Americano and waxberry juice, this martini twist delivered both fruitiness from the waxberry and saltiness from the seaweed.
Stella Shu 12 Leather, by Joe Schofield, Tippling Club, Singapore
The Sensorium menu at Tippling Club got more ink than any self-respecting bartender’s arms during the last year, and with good reason. The concept pushed boundaries when it came to flavour perception, and our pick was the Leather – an utterly delightful and transformative experience. (And there wasn’t a studded paddle in sight.) NH 13 Cheese Tea, by Hey Tea, China
Cheese tea took China by storm this year. To re-cap: the serve offers up a foamy, thick, cheesy liquid on top (combining milk, cream and cheese) with all kinds of tea tucked under it, served hot/cold/with/without ice. Hey Tea pushed its nose out in front in a crowded market, with people queuing for five hours (or paying a professional queuer to do the time for them). When you sip, all the flavours come together: sweet and creamy, then refreshing, tea-some-ness after. For me (and most Chinese) who don’t rave about cheese, cheese tea made it fun. And being this successful, of course, cheese tea spawned its own cocktail spin-offs: Zero Chen’s Guns & Butter at Union Trading Co, Choni Song’s The Artisan #8, and Sunny Xiao’s Childhood at Chic Tail. Rachel He

14 Full Moon Party, by Vijay Mudaliar, Native, Singapore
While everyone was talking about the Antz cocktail, our DMBA Asia Bartender of the Year dropped bomb after beverage bomb in the two-oh-one-seven. This lunar-inspired treasure was our pick. Recalling the celestial backdrop of the never-remembered full moon parties in Thailand, this cocktail dances with homemade cola, Mekhong spirit and unexpected pH levels to beautiful effect. DB 15 Double Talk, by Atsushi Suzuki, Speak Low, Shanghai
Another global comp winner, which we definitely did try, after the same drink swept Atsushi to victory in the China final of Chivas Masters and took him to Tokyo, where he won. It’s a Chivas, Campari and bianco vermouth sipper – simple, elegant, and now with greatness thrust upon it. TW 16 Cabbage Wine, by Sasha, Operation Dagger, Singapore
“Natural wine” – but when it’s uttered by Operation Dagger’s Luke Whearty, you know he’s moved the conversation beyond the wine world’s current sweetheart. This was actually the creation of Dagger teammate Sasha, and sees red cabbage fermented with rose vinegar and red apples in naturally occurring lactobacillus cultures to deliver palate-whetting tang and a sweetness that cleans up after itself with floral notes and tartness. NH 17 Apples, by Coupette, London
We’re allowing ourselves just one from outside Asia, because it’s a goodie, and neatly sums up the focus on produce and simplicity that’s become a signature among bartender trends elsewhere in 2017. The bar gets a fresh batch of lesser-known apples each month, cold-presses them, carbonates the juice and pairs with a different calvados. As a highball it’s staggeringly effective. It also elegantly asserts purity of flavour and precision of concept over hyped-up bartender ingenuity. DB

As DRiNK Magazine looks back on the year gone by, stay tuned for our stories on the industry news that defined the year, best venues to open in 2017, the competitions that elevated the region’s talent, the recipes that defined drink making, and the trends we can’t wait to be rid of in 2018. Bookmark our 2017 Recap page here.

17 news stories that defined the industry in Asia in 2017

Bangkok’s #FindtheLockerRoom is closing at the end of December