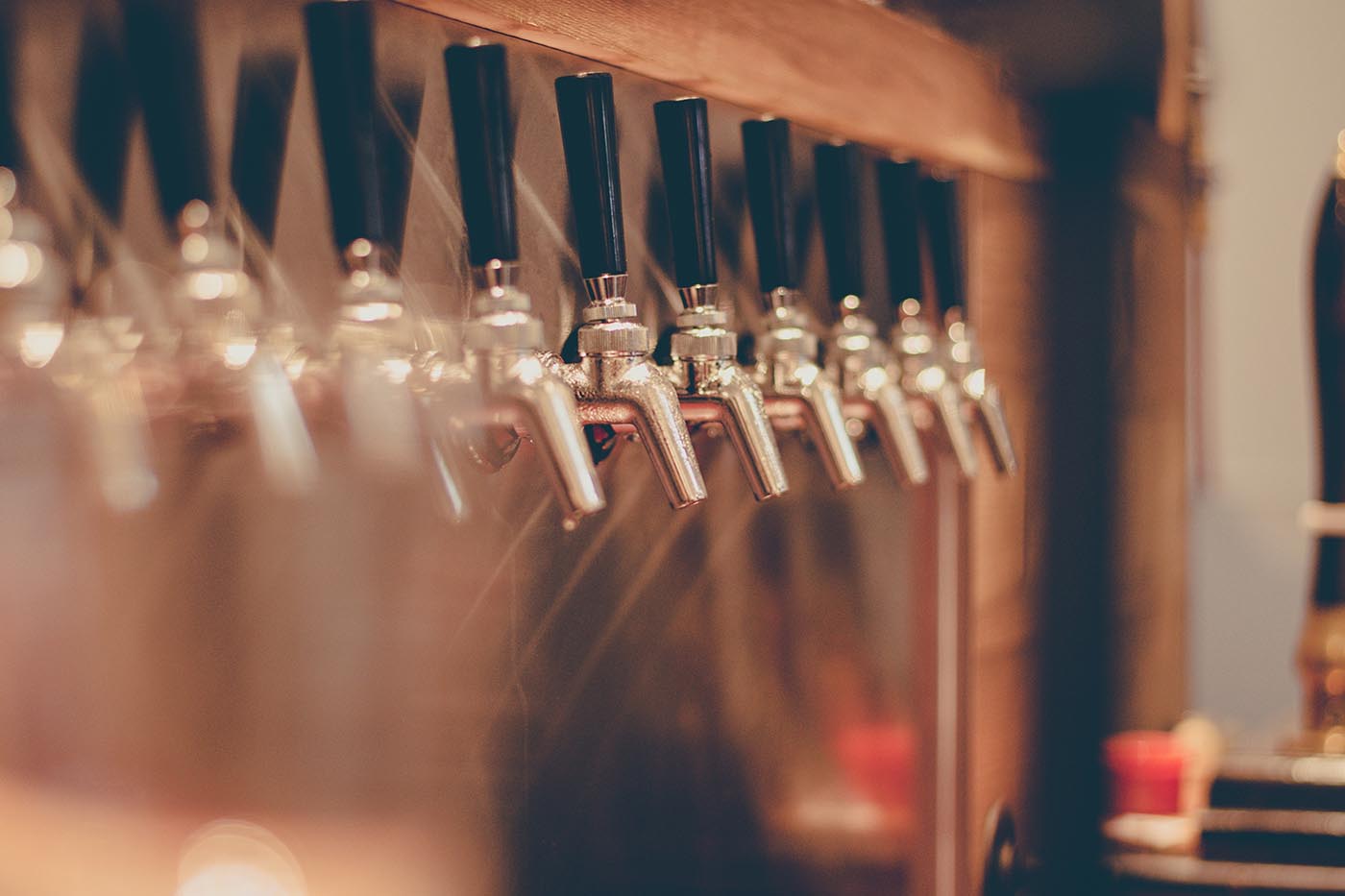 Carefully curating what you craft you have on draught is daft it you’re not taking care of the product you’re pouring. By Jonathan White.

01 Keep it moving
“The best thing you can do for beer,” according to Calvin Jameson, owner of Calvin Beer Company in Hefei, “is to sell it fast. If you’re selling it fast, it stays good, everything is easy.” Jameson admits that this is “probably not the advice a lot of people want to hear” but “if you’re not turning over a really high volume, then having a smaller selection is probably a good choice.” How fast is fast enough? Enter Master Gao: “Sell it as soon as possible – no more than three days, even if it’s stored cold.”

02 Know exactly what it is you’re buying…
Jack Zhang, general manager at Kaiba in Shanghai, suggests that you give your suppliers the third degree: “How do they get it? Is it cold or not? When did they get it? How do they store it?” He advises also taking it further than that: “Some suppliers don’t care, so go and look to see how they take care of their kegs.” Ideally, it will be a cold chain supply, Zhang says, meaning that it has been temperature controlled at every step of the way from the brewery to your bar. Pasteur Street Brewing Company in Ho Chi Minh City, Vietnam, has taken the impetus to keep their beers optimal by introducing one-hour delivery from their own cold-storage warehouses in Hanoi and Da Nang. 03 …Or, suppliers, who it is you’re selling to
“There are some people I talk to”, says Pasteur Street’s brand ambassador Mischa Smith, “where we’ve had to ask six times to keep our beers in a fridge. Then when we get there and ask to store the kegs in a fridge, they’re like, ‘We don’t have them.’” Matt Frazar, co-founder and brewer at 23 Brewing in Taipei, says that there is a limit to what 23 Brewing will allow: “Our policy is to educate the customer on how to take proper care of our kegs and bottles, explain to them best practices and hope they follow our directions. If we discover a problem with how they are handling our beer, we will take appropriate steps to fix it or stop selling our beer to that location.”

04 Why so chill?
Frazar says that at 23 Brewing, “One of the biggest mistakes we have seen bars make is not refrigerating their craft beer kegs.” He argues that this more important than ever: “In the past, most bars served pasteurised and/or filtered mass produced lagers, which did not need to be chilled. Today, imported, as well as locally produced, craft beers are not stabilised. Without refrigeration, hop flavours will die and the yeast will become active again, changing the flavour of the beer.” Carl Setzer, founder of Beijing’s Great Leap elaborates: “There is the potential for beer to re-ferment when it’s stored warm. This is not true of all craft beers, but in extreme situations, beers that still have more than 50,000 cells of yeast per millilitre are more likely to re-ferment or display changes in flavour.”

05 Follow your nose
Andrew Tierney, assistant brewer of Little Island Brewing Co in Singapore, believes that the best lessons are learned the hard way. “We have had a batch of CO2 tanks that still had alcohol or sanitiser in them, so they were adding additional flavour to the beer,” he reveals. “It made the beer smell like a hospital and we had to dump 500 litres.” That wastage could have been avoided, he says, if they had checked every step of their set- up: “We didn’t pick up the problem until we had carbonated the beer. It was only when the CO2 tank was finished – we opened the cylinder valve to empty the last little bit of it – I went, ‘WTF is that smell?!’ Check your CO2 before you use it,” he advises. 06 In fact, we need to talk about your gas
Tierney also recommends using nitrogen rather than CO2 if you leave the gas on the keg overnight, or when a particular keg is not selling quickly enough. “You risk over carbonating the beer, especially if you use long lines,” he says. “And you have no idea of the amount of CO2 the brewer put in before it reached you.” He argues that as nitrogen is not absorbed into beer as readily, “It makes the perfect push gas as it doesn’t do anything to the flavour of the beer.” A way to avoid under-carbonation or gas problems with your beer – which might send you looking for a spoon to get rid of extra foam in each pour – is to require your distributor to switch the gas in your tank from International Beverage Standard CO2 to a mixed gas solution of CO2 and nitrogen, Setzer explains. “Most gas providers can meet this standard and the added cost is not prohibitive. Your distributor will say it’s too expensive – they are lying.” If you can’t convince them? “The ideal set up is to buy pure nitrogen and CO2 from a vendor and run a gas mixer in line,” Setzer suggests. “A gas mixer is a pre-set mixing station that requires no electricity or other utilities and literally just regulates the percentages of each gas in line and makes sure you have a constant head pressure of nitrogen and CO2 from independent and separate source tanks.”

07 Clean your lines
There was some debate between our brewers about how often this needs to happen, but the consensus was that it’s non-negotiable – and easy enough. “Setting up a clean in place (CIP) schedule and regiment is fairly easy, and just requires a basic knowledge of how draft systems function and what the tolerances are for draft system service and maintenance,” according to Setzer. “Beer does not clean beer lines,” he adds. “High and low pH cleansers do.” What happens if you don’t clean the lines often enough? “The same proteins that produce foam accumulate in the system, and become a hot bed for micro- biological contamination and the reformation of diamethyl sulphide (DMS) and diacetyle (butter or dairy flavour) in your beers.”

08 Keep the tap out of the beer
Richard Ammerman, marketing director of Jing-A in Beijing, is unequivocal when it comes to taps touching the beer. “Don’t dip the beer faucet into the beer as you pour it,” he says, “It’ll get grimy and then you’re dipping a dirty, crusty tap into your customer’s beer.” It’s a sentiment echoed by many. Take 23 Brewing’s Frazar: “People do not clean their tap lines or take their tap faucets and couplers apart for cleaning nearly often enough. It’s tragic for great beer to be degraded by dirty lines and taps.”

09 Run it off
“Everyday, before you serve the beer, you need to make sure there is no stale beer left in the line otherwise it will end up in a customer’s glass,” says Will Yorke, co- founder of Beijing’s Arrow Factory, of the liquid that sits spoiling in the pipe overnight. Kaiba goes one step further by attaching the couplers in their coldroom to a filtered water supply at the end of each shift, ensuring that water, rather than beer, rests in the pipes overnight. When the couplers are reattached to the beer in the morning, explains Zhang, the water in the lines is run off from the taps, wasting less beer. It’s not just the first pour of the day, residual beer can be an issue during service, too, explains Yorke: “As you serve the beer, each time a bit of beer is left in the line. If you not serving that beer very quickly, then that will also spoil.” So if you’re not pumping out the pints, you will have to pour off some before you let the beer hit the glass. 10 Glasses
Cleanliness can be an issue, says Michael Cichon, brewmaster and bar manager at The Hop Project in Shanghai: “I make sure to use an alkaline glass cleaner. Using dish soap leaves a film of oil and that will lead to reduced head on the beer. And who really feels like drinking a mouthful of soap?” Glasswashers are seen as a sound investment – the addition of a water jet, or glass rinser, serves two roles, according to Yorke: “It rinses the fresh glass of any possible remaining soap residue and the cold water chills the glass.” Zhang of Kaiba is keen to stress that any rinsers need to be using potable water, not local tap water.

11 Pour with vigour
“The process of pouring a beer is pretty important,” states Cichon. “People can get pretty pissy if there’s a ton of foam on top, so a lot of bars are training to pour slowly or down the side so it’s not releasing any carbonation. You get a full glass, but there’s no head on it whatsoever.” You need to educate your customers – and your bar staff – that a good layer of head on a beer is essential. Aside from slowing the beer oxidising, he adds, “You need some agitation to release the CO2. Otherwise it’s basically going to make beer foam in your stomach.”

12 Put systems in place
Zhang says there are three points to Kaiba’s system: delivery and storage, opening and cleaning the system, training and recording. That the bars all comply with the same system means he can manage things across three bars and much of it becomes habit. “First thing the staff check every day is how long the beer has been open for. If it has been on for more than three or four days, then the line manager needs to taste and decide if it stays on.” Christopher Neuter, operations director at Taiwan’s Sunmai brewery is another believer in systems: “From my experience, not all beer servers are trained appropriately,” he explains. “They may have difficulties troubleshooting, thus have bad serving techniques, produce a lot of avoidable beer losses, or present the customer with a beer in the wrong condition.” A comprehensive system addresses that.

13 Educate the team
Michael Jordan, brewmaster at Shanghai’s Boxing Cat Brewery and Liquid Laundry, recommends “having a line to brewery personnel for questions or tips”. Great Leap’s Setzer adds that you shouldn’t leave the onus for a good pour on someone else. “The biggest mistake that bars are making when it comes to taking care of their draft is allowing it to be managed by the distributor.” Jason Lowe, co- founder of Hong Kong’s Heroes Beer Co is a proponent of taking steps toward self-education: “Download a CO2 volume chart to understand how much CO2 dissolves in beers under what temperature and head pressure, then make an effort to learn what are the appropriate CO2 volumes to serve each beer at,” he advises. Setzer has a similar suggestion when it comes to cleaning the lines: “Micromatic’s website has a good guideline on how often to clean your lines, depending on the length of your beer lines and the amount of product you serve a week.” 14 Trying to save money will cost you
Jordan thinks that the biggest mistake bars make is trying to cut costs: “I think many bars skimp on their draft beer set-up by using cheap equipment, which inevitably results in high wastage and lost profit.” Cichon at The Hop Project agrees – and has seen what that does first hand. “There’s a lot of cheap faucets on the market that are chrome plated. I’ve seen that plating come off, and even into a customer’s glass.” Think about where you are spending your money. “Exposed bricks and Edison bulbs are cool,” says Setzer, “But the return on investment on our infrastructure and beer service has become obvious over time.”

These were the best new venues to visit in 2017