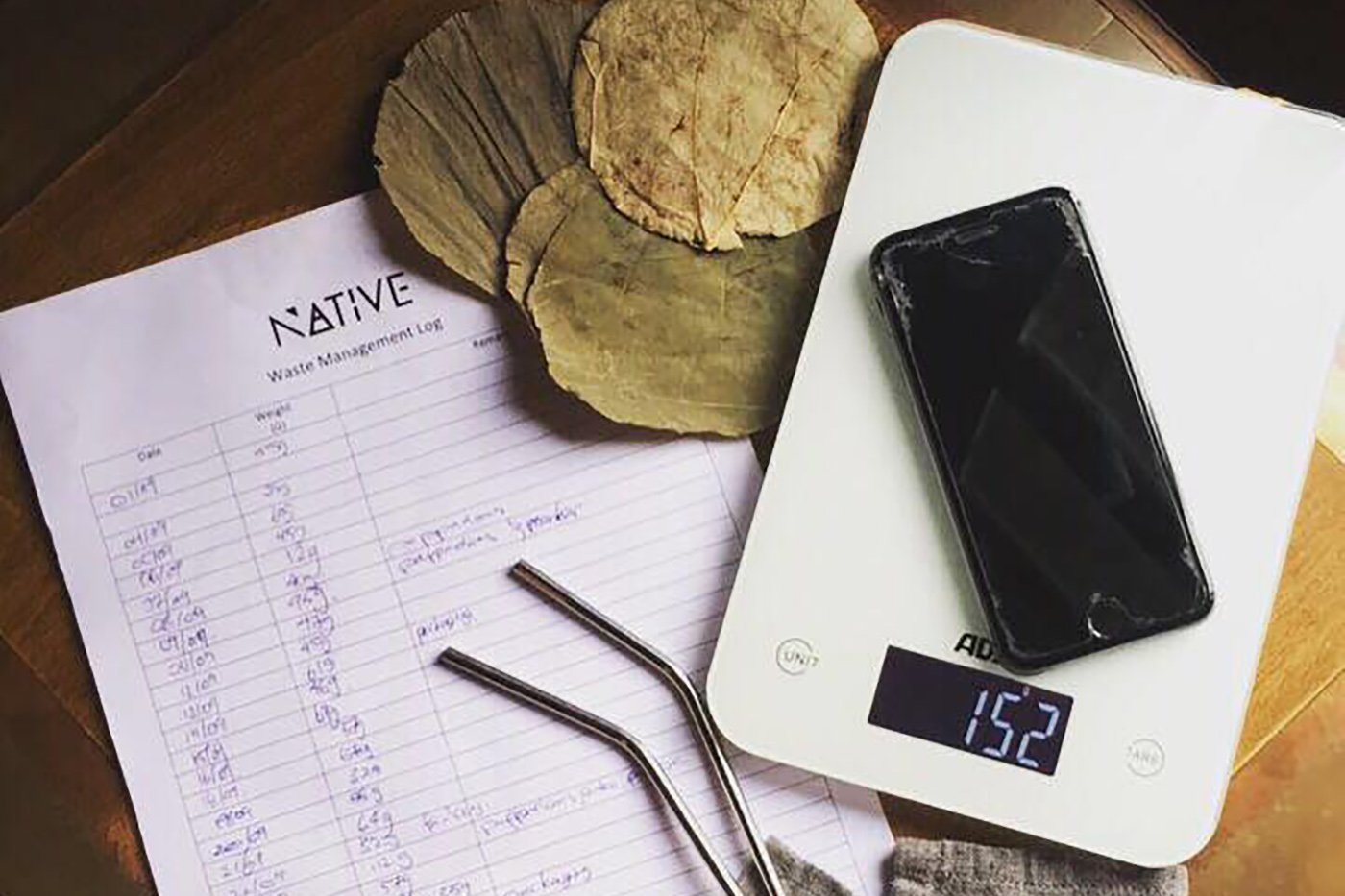 As part of DRiNK Magazine’s three-part feature on Sustainable Drinking, we speak to Native’s Vijay Mudaliar on the small steps you can take to lessen your bar’s impact on the environment. By Natasha Hong.

Vijay Mudaliar’s bar, Native, has been in the news a lot lately for his urban foraging exploits, his advocacy for made-in-Asia spirits and ingredients, and that ant cocktail – but not so much for his waste management program. Because well, who really wants to be talking about trash?

Yet, it’s something else to crow about. As proof of his bar’s higher intent, his drinks program extends beyond picking fruit from within walking distance of his bar. At last count, the bar produced just 40g or so of waste on a busy Friday night – the size of a wallet and a phone, but lighter – which sometimes unfortunately include tissues that wheezy customers bring in.

The bar runs fully on solar energy, and contrary to procurement wisdom, his team shops for ingredients at local wet markets that don’t wrap their produce in plastic and then tote it back in their own reuseable bags. Instead of cling wrap, the crew stores their prep in food storage boxes lined with cloths, and to sous vide, they skip the ziplocks and just combine their ingredients in glass jars to steep. And by adding a Bokashi culture to their compost, the bar produces its own cleaner that it uses as a hand sanitiser, surface cleaner and in its mop bucket.

At the end of the night, when they all pop out to Skinny’s Lounge for a post-shift drink, they spontaneously ask the bartenders there not to include a straw in their cocktails. (“I didn’t tell them to do it,” says a stunned Mudaliar. “When I heard them say it, I was, like, shocked.”)

While his drive towards a zero-waste bar program is ahead of the curve and isn’t always practical for every bar to sign on to, he believes that the industry as a whole can each do their bit to tip the scales in the environment’s favour. Here, he outlines seven straightforward steps you can easily implement at your bar to limit waste:

1 Suck less
Mudaliar echoes the #refusethestraw sentiment growing among bars around the world. “Nobody really needs a straw,” he says. It’s a matter of preference, he believes, but if you must, look to alternatives like washable metal or bamboo tubes, or new innovations like biodegradable potato starch straws (note: these dissolve in water at 60C, so keep them out of your hot toddies).

2 Find some new acid in your house
“As a community, we really have to diversify how we look at acidity,” he says. Instead of usual suspects like limes and lemons, Native uses vinegars, yoghurt whey and ants to add zip to their drinks. He also cites Trash Tiki‘s Iain Griffiths and Kelsey Ramage’s discovery that burnt carrots yields a tart acidity, and White Lyan’s “fake lime juice” substitute for their Limeless Daiquiri. “We really need to open our minds to the possibilities, because I can guarantee that citrus shells are one of the biggest contributors to your waste at the end of the night.”

But, Mudaliar emphasises, if you look for a substitute, it has to still make a good stand-in for what you’re switching out. “It can’t be like Equal sugar – but I think here’s where us bartenders can shine. There are a lot of creative bartenders out there, and I think if we put in the effort, we can come up with something.”

3 Think of ingredients as a whole
How do you use every part of a lemon? At Native, they juice their citruses, strip the peels and the pith for a cordial, pickle bits of the lemon, and then torch the leftovers into a charcoal powder for garnishing. “When you use an ingredient, see if you can use its by-product in the same cocktail, so you’re not always catching up with your leftovers and stuck with too much of one component,” he explains. “And when you look at the ingredients you’ll need in a cocktail, break your preconceptions of what can and cannot be used.”

4 If you can’t use it in a drink, consider an item’s next use
The bar pays a glass recycling service $40 a month to take away its used bottles. “It’s just $40 man, get with the program,” urges Mudaliar. The team saves the glass bottles in a bin in the bar, and hands it off at one go to the collectors, conscience all clean. He also shared the example of Bo.Lan restaurant, that pays a company to clarify their used oil to make soaps in Bangkok. “Our trash is actually valuable.”

5 Set attainable goals, but push for the stars too
The bar didn’t start out wanting to hit 40g of waste. They started the count at an already-impressive 500g on a Saturday night, but Mudaliar pushed the team to hit 100g. “In my head, I thought it was impossible,” he confesses. “We hit 300g and the guys were like, ‘Dude, this is like two iPhones, can you give us a break?’ but I kept pushing, and we hit 90g. In my heart I was like, ‘Holy f***, we did it.” These days, 100g of waste in one night is their upper limit, and they’ve even gotten rid of their trash bags at the bar.

6 Not producing so much waste actually pays off for your staff in the end
“It’s a lot easier for us!” he says. The bar saves time juicing lemons and limes pre-shift, and when they have to make their cordials or vinegars, it’s a one-off effort that sees them through the week or next. At closing time, the bartenders are spared from lugging down 10kg trash bags from their second-level perch. “No leaks, no rubbish, and the guys feel physically better at the end of the night.”

7 On board? Here’s how to sell it to your customer
“Actually, a lot of times, we never really talk about our program until the customer asks about it,” shares Mudaliar. “If at the end of the night, the customer doesn’t ask, we’re also not going to just go up to them and be like, ‘Hey guys! Just wanted to let you know that…'” The trick, he says, is to lay down an opening gambit to talk about the small steps you’re taking. “For us, we put down a lotus leaf coaster, and people usually notice it and want to talk about it.” In the end, Mudaliar believes that the onus for customer appreciation for this new way of drinking is down to his fellow bars. “If more people start doing it, then they’ll think, why is everyone talking to me about sustainability? Is this something I should be taking note of too?”

DMBA 2017: The day after the night before