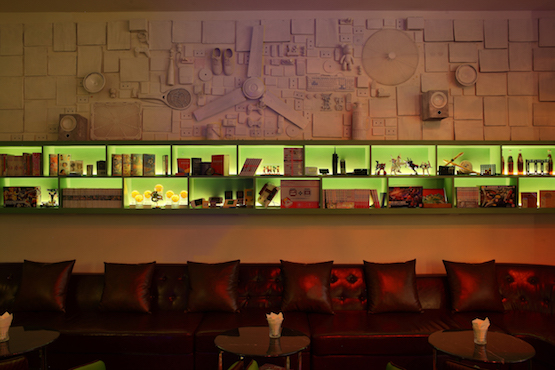 Nostalgia runs deep at Go Chill, where the owners are trying to guests back to the 1990s. By Jonathan White.

Go Chill, as you may have guessed, is about taking it easy and the two-month soft opening is testament to that. The bar is hidden inside a small supermarket but that doesn’t mean it is a speakeasy, rather it’s about reliving childhood – specifically growing up in Guangzhou in the 1990s – just with adult drinks. Guests can play popular video games from the period, for example, as part of what owner A Jiao describes as an attempt to create a place where people can forget about their phones and hang out with their friends.

Growing up in the 1990s forms a key part of Go Chill’s identity, also inspiring the decor and the custom built furniture such as the school desk and chair in the corner of the bar. According to A Jiao, many local guests say the design brings back the “nightmarish” childhood memory of burying their heads in schoolbooks but that’s not such a bad thing in Go Chill, though.

The menu, which is kept on the desk, is designed to look like the primary school textbooks of the ’90s. Inside that menu, whisky is the main focus of a drinks list that falls into three categories: single malts (as you might expect from a bar that wants to push whisky education), classic cocktails and signature drinks. The latter, interestingly, mixes single malts with the characteristics of traditional Guangzhou drinks. Class is in session.