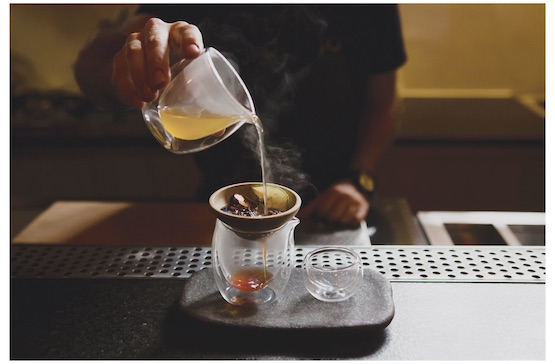 “When I first arrived in Cape Town I was amazed at the abundance of indigenous produce,” says Luke Whearty, founder of Outrage of Modesty. “It’s a fact that the Western Cape is more biodiverse than the whole of the Amazon,” explaining why the bar sticks to South African ingredients, maintaining a strong focus on indigenous plants and close relationships with suppliers. “We also forage for quite a lot of seasonal produce as our menus change with the seasons,” he adds, citing sea figs, num-nums, osyris berries and spekboom as notable exotic examples. Whearty recently arrived from Singapore with Aki Nishikura, where they co-founded Operation Dagger, to set up Outrage of Modesty with Drew Madacsi and Brad Armitage (both of Capetonian music and cocktail venue House of Machines) plus help from Roushanna Gray of Good Hope Gardens, who he credits for introducing him to local produce. Wild rice, fennel pollen, corn blossoms, raw cacao, the local citrus naartjie and pelargonium are all sourced in and around the surrounding fynbos shrubland, along with pinotage (the country’s signature wine) and bee pollen. (Interestingly, Whearty notes, winemakers in South Africa often keep bees as an alternative income in case of a bad harvest.) Whearty also eliminates waste with such things as lemon charcoal, charring and grinding already juiced lemons to provides cocktails with a unique aroma. As much as 90 per cent of what they use is local or made in-house through redistilling by rotary evaporation, sous-vide infusions, custom blending – such as the six-whiskey house bourbon, similar to Operation Dagger’s house spirits – and fermentation using different yeasts.

The bar’s name is a reference to a clause in the Singaporean penal code, where an inappropriate touch or look is deemed an attack on modesty and a punishable offence. “We thought it was fitting with the drinks not following the ‘classic’ approach, some may feel that our drink making is an outrage of modest ideals.” For example, as at Operation Dagger, there are no mentions of spirits on the printed menu. “I want people to think of the drinks in terms of flavour rather than what specific brand or spirit is being used. We as humans tend to find our comfort zone and stick to what we like. This way people can hopefully experience something for the first time.” The name may come from Singapore but Africa is never far out of sight. Whearty makes Amasi, a fermented milk drink popular in Zulu culture, and offers Caperitif, a recently revived South African quinquina vermouth made with 35 botanicals indigenous to the Cape region. The once popular brand, originally mentioned in The Savoy Cocktail Book, was considered lost for decades until the local Badenhorst family brought it back from extinction. Outrageous or not, at the end of the day, Whearty says, “it’s just about creating a fresh, new experience.”