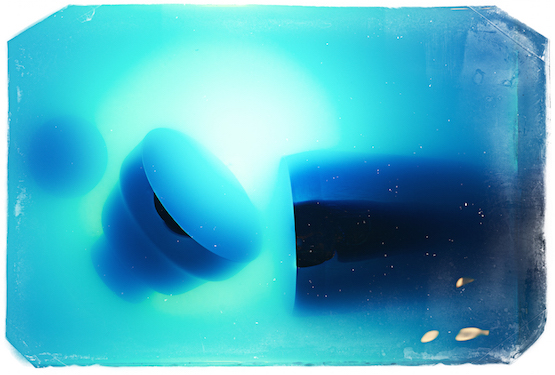 Bored of brown stirred drinks? So are your customers. Time to bring back blue cocktails from the dustbin of seventies kitsch. By Paul Mathew.

Blue cocktails are inescapably linked with the sweet disco drinks of the 1970s and 1980s – with lemonade, layering and sour mix. But in fact they have a much longer history and are in the process of writing themselves a whole new chapter. Bols was producing blue liqueurs at the turn of the last century, and even craft bartender’s bible The Savoy Cocktail Book (1930) has its share of blue drinks, including the Blue Train (essentially a White Lady with a dash of colour: 50ml gin, 25ml lemon, 25ml triple sec, 1 dash of blue food colouring). But while barkeeps have long appreciated the appeal of a blue drink, fast forward to the start of the modern golden age and blue was definitely not an ingredient of choice for the discerning mixologist. At a time when we were rediscovering the Martinez, the Boulevardier and the Last Word, frivolity and cheap liqueurs were banished from the back bar – to be replaced with bitters, rye and vermouth. This modern golden age also heralded an explosion of cocktail competitions as brands wrestled for the loyalty of the new generation of bartenders. One of the most keenly fought was the 42 Below Cocktail World Cup, with its finals held in Queenstown, New Zealand, and it’s here that the blue drink was reborn, courtesy of then brand ambassador and competition mastermind Jacob Briars.

Briars recounts a perfect storm of three factors that lead to his championing of the blue cocktail. First, he had an abundance of blue. “Due to an email error, the team from Thailand had requested two cases of blue curacao instead of two bottles. Having arrived at the event and seen the judges, they realised that blue drinks weren’t going to work.” His storeroom was therefore full of inspiration – and stock – when his own blue epiphany came. The second factor was Briars’ frustration with the pretentiousness that had entered the cocktail world. “It had got to the stage where there were so many rules – everything was bitter, brown and stirred; you couldn’t have vodka, etc. I was sitting there thinking, was this what people like Dale DeGroff had worked so hard to give us? And of course it wasn’t.” The final trigger was former colleague Dean Callan, who had recently acquired a copy of Ted Haigh’s Vintage Spirits and Forgotten Cocktails (2004). “He was obsessively ordering Corpse Reviver #2s in every bar we went into, and it was getting annoying. So one night I just made a Corpse Reviver #Blue to lampoon the seriousness of these vintage drinks, and it grew from there.”

As an international brand ambassador, Briars was well placed to spread his message, ordering blue drinks in the world’s best bars and quickly building up an alliance of like-minded advocates, including Gregor de Gruyther (in London, making blue margaritas), Naren Young (in NYC, the Disco Fizz – a silver vodka fizz with a dash of blue curacao) and Jason Williams, who offered to “upgrade any drink to blue for 50c” on the menu at Sweatshop in Melbourne. “We all wanted to make great drinks, but they didn’t all have to be brown and bittersweet. It was a counterweight to that.” Indeed Briars felt that craft bartenders were losing touch with their guests: “Blue drinks are perfect for whenever I see that gap between what bartenders are pushing and what customers want getting too great.”

Eight years on from those first repainted Corpse Revivers, and blue drinks are getting more and more press, embraced by award-winning bars and bartenders from PDT in New York (with its drink The Shark) to The Artesian in London (with the Bubble Tea Blue Lagoon). “It crept along for years as a sort of bartender in-joke, but all of a sudden it has reached a tipping point in the last year or two and blue drinks are cropping up all over the place. I think what it indicates to your guests is that the quality of your bartending is so robust that you have the confidence to offer blue drinks.” Briars has tried many different curacao brands and other ways of colouring drinks, even working with a small Australian distiller to produce a bespoke brand. But when it comes down to it, he recommends any standard blue curacao. “Part of the problem is that citrus kills most natural blue colours – they often come out grey. It’s just very difficult to do.” He also adds that even those liqueurs you think of as having more natural colours contain fixatives and artificial colourings to keep them stable. “Almost all liqueurs have something added to colour them – the only two I know that don’t are Chartreuse and St-Germain elderflower liqueur. So what’s the difference with just being honest and saying that you’ve dyed it blue?”

Even in the world of blue cocktails, there are guidelines. “The best drinks are the ones where the blue is supposed to draw you in. Yes there’s a challenging ingredient here, but don’t worry, the water’s safe,” says Briars. In the case of the Corpse Reviver #Blue it was Lillet and absinthe, both new to drinkers at that time. With PDT’s Shark, it’s overproof rum (the drink contains butter-washed rum, overproof rum, lemon, pineapple, Frangelico, tiki bitters, cream – and blue curacao). In the Gun Metal Blue (Porchlight, NYC), it’s mezcal – tequila’s smoky relative. “The success of these drinks is that you don’t expect these flavours from a drink that’s blue. It works best when it’s a surprise.” Briars also cites Tony Conigliaro as someone who has a similar approach with his (non-blue) creations. “I think Tony’s mantra of ‘Unusual ingredients served in simple ways, simple ingredients served in unusual ways’ is very clever. For us, it’s about using blue to hold people’s hand into new drinks.” A sweet and approachable drink made blue just wouldn’t work – too kitsch.

So when you’re next making a colourless classic or deciding what to devise for a guest, perhaps consider that bottle of blue curacao. As Briars concludes, “Whenever you put a blue drink in front of someone they smile. You can see their eyes light up, as if to say, ‘Thank you, that’s a drink that looks like a lot of fun.’”

This article was first published in Issue 38 of DRiNK Magazine China. Subscribe to the magazine here.