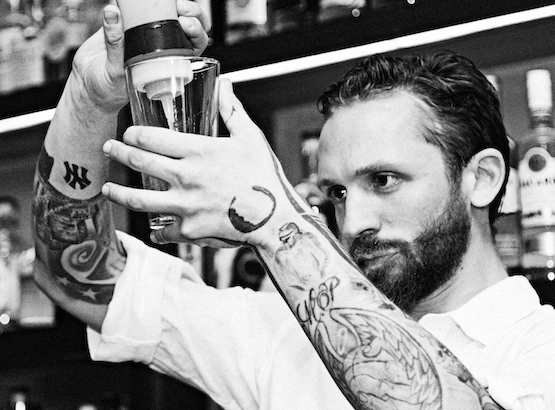 Principal bartender at New York’s Employees only, star of documentary Hey Bartender! and cocktail-making speed king – Steve Schneider spells out how to tend bar like a champ.

1 Use your eyes. All of the time.
“Keep your head up and make eye contact with people – when you’re wiping the bar counter, when you’re pouring ingredients, when you’re shaking drinks. Let them know that you know they’re there, preferably as soon as they walk in through your door. Even if they have to wait, if you make eye contact, they know that you have seen them. ‘One second, sir’ – it goes a long way. You are making people feel comfortable, because there’s nothing more annoying than feeling like you’re being ignored. Like when I’m trying to talk to a young lady and she’s ignoring me. It’s frustrating.”

2 Learn to speed pour.
“Balance a cocktail not only by tasting, but by using all senses. You have to feel the flow of the liquid leaving the bottle. See the balance in the mixing glass. Taste your final product and believe in yourself. Make no mistake; this is no easy technique to master, which is why we at Employees Only are one of the only bars to use it. It’s a lot easier to just fill a measuring cup to the top and pour it in a tin. However, I’ve been making drinks like this for 12 years and this technique increases guest interaction and, most importantly, increases revenue. As a team, we made over 182,000 cocktails last year, not counting highballs, shots, beer, wine. With only two stations, three bartenders and being open 362 days a year, ten hours a day, that’s one cocktail every four minutes that we’re open. I’d say with steady practice and repetition, you can be good at it in six months to a year. If you make one of your cocktails over 15,000 times a year, you can make it with your eyes closed. The rewards are worth the hard work.”

3 Your relationship with a guest doesn’t end with a transaction.
“I love affecting people in a positive way, whether it be other bartenders or a guest. My favourite was when two people came into the bar, a man and a woman, and they said they met at the bar, and I was their bartender, and now they’re married and they’re celebrating their anniversary. Be a part of people’s lives. Even if it’s a tiny part, it feels good. My work is my extension of my love for people. And that goes beyond bartending. That carries over into life. What happens when I’m too old to bartend? If I own a bar, people will want to work for me if they believe in me and if they like me. If they don’t like me, why would they work for me?”

4 The drink is for the customer, not you.
“I taste all my drinks, every single one, even Dirty Martinis. Because no matter how good you are at making drinks, somebody always sends back a Dirty Martini, because you didn’t make it right. So I always double-check how they want it. I don’t try to make drinks for people so I can look cool; I make drinks so guests can enjoy themselves. That’s my mentality. Just handle yourself like a champ, like a winner, like a good bartender, and the coolness will come, I think. Don’t try to show off.”

5 Above all, enjoy yourself.
“Before starting our shift, we always give each other a hug. And then we always ask each other, in one of our bartenders’ native languages, ‘Are we going to fuck something tonight?’ And then we do shots of Fernet.”

6 If you take the job too seriously, service will suffer.
“The industry gets a bit too serious sometimes. That’s what happened in New York. There was a time back in 2008, 2009, even 2010, when bartenders were very serious about what people drank: ‘No, this is what you have to drink’. ‘But I want this’. ‘No, you drink that’. Or: ‘This is how you stir, this is how you shake’. But once everybody started to understand how to make drinks, it was: ‘Now let’s have some fun again’. There had to be a standard that was set before everybody could loosen up. People loosened up around 2011 and that’s when we won world’s best cocktail bar – the fun bar finally won the serious award. So for every bar that’s too serious, I’ll give you five now that aren’t. I’ll give you five that are great. I’ve been to bars where the drinks were great but the service was terrible. I’d rather go to a bar with bad drinks and great service. And there’s always bottled beer.”

7 Don’t act the teacher with your guests.
“There’s so much information available for bartenders. They can read about so many different products, about how things are made. They can almost get too much information, and then they forget the guests don’t really know as much about it, so they can get a little impatient towards guests. But you have to take a step back and realise that great drinks can get people in the door, but how you make them feel, that’s what keeps them coming back.”

8 Don’t act famous, either. Even when you’re famous.
“I’m just a regular dude. I’m just a bartender, just like the people that are helping me. I don’t put myself above anybody, never ever. That’s not what I’m about. Yes, it’s been cool to see people genuinely happy when I walk into a room. That’s a feeling I can’t really describe. Humbling, to say the least. But at the end of the day, come 6pm to 4am, I’m back at home, I’m not a rock star, I’m ready to be at service for you. I back it up. I used to drink more at work, now I don’t really drink till later on. When people come from all over, and they want to go to Employees Only because they’ve seen me in the movie, I’ll be damned if I was all drunk when they got here.”

9 Don’t put yourself where you don’t want to be.
“When I had my head injury, I was in a hospital doing all sorts of rehabilitation. I was feeling sorry for myself, I was just depressed. I had three plates in my head. I was a bit damaged in the brain. Nothing was working because I didn’t want to be there. If you don’t want to be there, you’re not going to perform. But when I was making drinks, memorising prices and recipes, working with my hands, I think that it helped me heal. I was doing something that I loved for the first time. And it took me away from all the other problems I had. So I want bartenders to ask themselves, ‘What do I want out of my job? Do I want to work for a brand, do I want to own my own bar, do I want to be in music, and just in bartending for now?’ It’s OK if you don’t know yet what you want to do in this career, but the sooner you find out, then you can start setting goals for yourself. In the meantime, you’ve got to be disciplined, but you’ve got to enjoy what you’re doing while you’re doing it. And be a good worker to people. Have people that want to work with you. If you have good bond with people, you can get really far in life.”