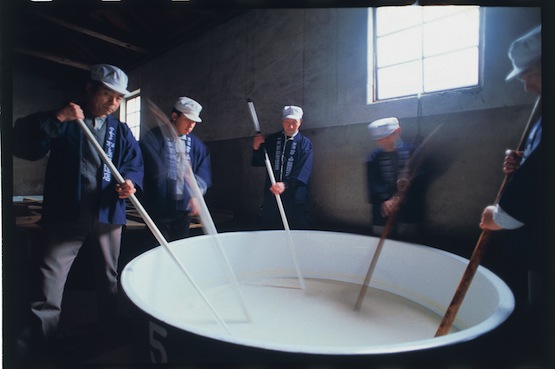 1 Sake is brewed from rice
Sake is made from rice only. No other grains or sugars are fermented in the sake-making process. While water, yeast, and a mould known as koji are included, no other fermentable materials are used.

2 Remember, “brewed”, not fermented
Sake is a brewed beverage. It is not a simple fermentation like wine, nor is it a distilled beverage like whisky. It is closer to a beer than anything else but is nonetheless unique. Beer is made by converting starches in barley to sugar using enzymes that arise when the barley is malted – that is, when it is moistened, warmed, and allowed to sprout. Sake, however, is made from white rice, which is rice that has had the brown outer part – the husk – milled away. This means that it cannot be malted the way barley is for making beer, but enzymes are still needed to chop the long starch molecules into smaller, bite-size sugar molecules. These sugar molecules can be gobbled up by the yeast cells, which then give off alcohol and carbon dioxide. In sake brewing, these enzymes are provided courtesy of koji mould. The spores of this mould are sprinkled on about 20-25 per cent of all the rice that goes into a batch of sake, and as this mould grows around and into the grains of steamed rice, it gives off the necessary enzymes, which then convert the starch in the rice into sugar. In beer, the starch-to-sugar conversion and sugar-to-alcohol fermentation take place separately and sequentially. However, in sake brewing, the mouldy rice trickles sugar into the mash in the same space and at the same time that the yeast cells convert said sugar into alcohol.

3 Sake is around the same ABV as wine
Sake’s alcohol content is about 15-16 per cent, which is only a bit higher than a robust red wine. This is watered down from the naturally occurring 20 per cent or so simply for enjoyability, since the higher alcohol content overpowers subtle aromas and flavours. Sake production yields the highest naturally occurring alcohol level of any non-distilled beverage on the planet: the aforementioned 20 per cent.

4 The production cycle can take up to eight weeks
To make sake, rice harvested in the fall is milled, then soaked and steamed. Koji mould is grown on about a quarter of it. Next, a yeast starter (moto) is created in a small vat from a mixture of the koji rice, regular steamed rice, water, and yeast. Here a very high concentration of yeast cells develops. This is to ensure that when wild yeast or bacteria drop into the tank, the correct yeast will be so abundant that there will be no adverse effects. To this small yeast starter, more koji rice, steamed rice, and water are added at three different times over four days to keep the yeast population from thinning out too much. This mixture – the mash or moromi – is allowed to ferment for about twenty to forty days, then the rice lees that did not completely liquefy are filtered away. After that, the just-completed sake will be pasteurised, filtered, and stored, traditionally for six months. Then it is diluted a bit, pasteurised again, and bottled.

5 Sake is, for the most part, fairly priced
While not everyone will completely agree with this, I stand by it: 90 per cent of the time, sake is fairly priced, and you will get what you pay for. Naturally, if your preferences in sake are clear – if you know what you like – then defer to those rather than price in making a decision. But should you not know what you like, or anything about the selections before you, making a decision based on price will work 90 per cent of the time.

6 Three things affect price and quality of a sake: first, rice…
Good sake is made from rice that is significantly different from rice that we eat. Note that not all sake is made from proper sake rice; however, almost all premium sake is. There are a handful of differences between sake rice and regular rice. Sake rice plants are taller, and the grains are about 30 per cent larger and with more starch and less fat and protein than regular rice. Furthermore, the starch that will be converted into sugar, and subsequently into alcohol, is physically concentrated in the centre of each grain. Surrounding that, near the surface of the rice grain, are fat and protein. Regular rice, these are more mixed up within the grain, and the colour is pretty much uniform throughout because the fats, proteins, and starches are more evenly distributed. But in sake rice, we can see a white centre in many of the grains where the starch is concentrated. The fat and protein are located in the surrounding, more translucent region closer to the surface of the grain. This is significant because rice constructed this way can be milled more effectively so as to remove the fat and protein hovering near the surface, leaving only the desirable starch behind.

7 …secondly, milling…
In proper sake rice, starches that will ferment are physically located in the centre of the grain. Around that, near the outer portion of the grain, are fats and proteins. This means that the more we mill the rice, the more we remove the less desirable fat and protein, and the more easily we can access the sought-after starch. In fact, a great generalisation – with plenty of exceptions – is that the more you mill the rice before brewing, the better the sake will be. Of course, more milling drives costs up, since you need more rice to get the same job done. The amount that the rice has been milled is referred to as the seimai-buai (pronounced “say my booh eye”) and is expressed as a percentage of the grain’s original size that remains after milling. If the seimai-buai is listed as 60 per cent, that means the rice was milled before brewing so that only 60 per cent of the original size of the grains remain.

8 …then, craftsmanship
The third thing that makes one sake better and more expensive than another is the labour-intensive, hand-crafted effort that has gone into making it. In other words, sake can be made by machine or by hand. Perhaps 80 per cent of sake is made using automated processes, and much of this sake is just fine and can be very enjoyable. However, almost without exception, the best sake is made by hand. Each step of the sake-making process becomes the foundation for the next, and the success of any step depends hugely on all that has come before it. So, quality resulting from painstaking effort early on is carried through to the end. How the rice is washed, soaked, and steamed affects the koji making, which in turn affects the fermentation, and this chain continues until the product is complete.

9 There are several different grades of sake
The top four grades of sake as a group are referred to as ginjo-shu and along with regular junmai and honjozo make up the six premium sake grades collectively known as tokutei meishoshu or “special designation sake.” All the grades of premium sake (junmai-shu and honjozo, junmai ginjo and ginjo, and junmai daiginjo and daiginjo) are legally defined by little more than how much the rice was milled before brewing (up to 50 per cent or less). That’s how important milling is. To make learning about sake as easy as possible, consider this point: if you remember just one word about the grades of sake, let it be ginjo. Ginjo sake is to regular sake what single malt scotch is to regular scotch, or what 100 per cent agave tequila is to regular tequila. It is the same stuff, but made with better raw materials and using more exacting methods to arrive at a better product. If you always drink sake with the word ginjo somewhere on the bottle, you will always be in the safe zone. Normal table sake, which makes up 65 per cent of the market, is referred to futsu-shu.

10 There’s a difference between junmai and non-junmai sake
Among the several grades of premium sake mentioned above, anything with the word junmai in it is made using only rice, water, and koji (the enzyme-rich mouldy rice), with no added alcohol. However, the three sake types within this premium realm that do not include the word junmai – ie. honjozo, ginjo and daiginjo – are made by adding some distilled alcohol at the end of the brewing process. In these types, the alcohol is added for very good technical reasons and not to increase yields as it is in futsu-shu regular sake. These reasons include, most significantly, helping to extract aromas and flavours from the fermenting mash. Many of the compounds in the mash are soluble in alcohol; adding a bit of distilled alcohol just after fermentation is complete raises the overall alcohol content, which allows more flavour and aroma to be pulled out.

11 The hot-cold question has no easy prescription
The “hot versus cold” dichotomy may be one of sake’s biggest distractions. Many sake promoters have oversimplified things by polarising the answer into “good sake should be chilled, bad sake can be heated.” Not only is it not that simple, but that statement is not even close to being correct. Most premium sake like ginjo should be consumed slightly chilled. There are of course the requisite exceptions. In fact, there is a bit of a warmed-sake renaissance going on in Japan now. So enjoy your sake – and your ginjo in particular – slightly chilled (about white wine temperature), but know that some are very enjoyable gently warmed.

14 things every bartender needs to know about pisco