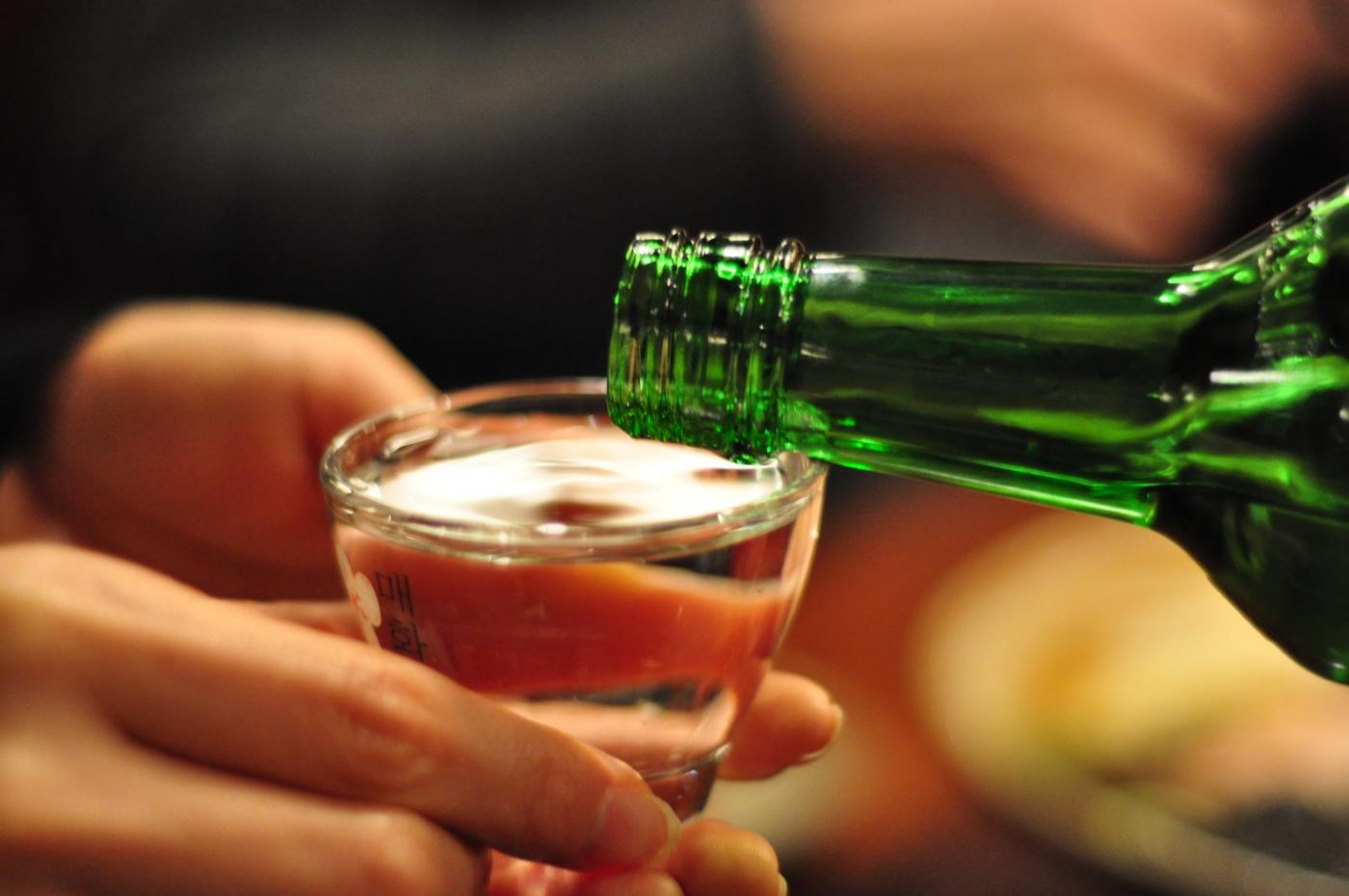 Korea’s soju experts share their knowledge and thoughts on the future of soju. By Holly Graham.

At last month’s Tales of the Cocktail, some of Korea’s finest came together for a panel on soju, to bust misconceptions of the most consumed liquor in the world. Panelists featured Demie Kim and Sean Woo, co-founders of recently opened bar Zest in Seoul; Douglas Park, co-founder of craft soju brand Tokki Soju and Julia Mellor, founder The Sool Company, which promotes and educates on Korean alcohol and its future. The panel was moderated by Keith Motsi, head bartender of Charles.H at the Four Seasons Seoul.

The team discussed all things soju, which, according to a report by The Spirits Business, continues to be the world’s best selling spirit – namely the Jinro brand. But as the panelists discussed, there’s a world beyond the iconic green bottle – a steadfast feature on tables in karaoke and barbecue joints throughout Korea.

Each panelist acknowledged soju is a quintessential part of Korean culture, but there’s a whole new world of craft, possibility and potential that’s waiting to be tapped into further. Demie, co-founder of Zest – a bar that focuses on Korean design, food and drinks, says: “I’ve always had a love-hate relationship with soju. Craft brands like Tokki signify a new phase where I have become friends with the soju, and show we have potential to change perceptions of it. As a bartender, it’s up to me to take these craft brands and show guests how to enjoy high quality products, too.”

Demie’s co-founder Sean adds: “In 2017 I went bar hopping in the US and noticed there was no soju on the backbars. I realised that I should learn more about that aspect of my country’s culture, so I’ve made it my challenge to introduce soju and soju cocktails to our guests and make it popular.”

A brief history of soju
Julia, who has dedicated the last ten years to the study and championing of Korean alcohol, notes that booze has always been a big part of Korean history. “There’s ebbs and flows as to which category is popular, and each is linked as you essentially can’t make one type without making the other.”

Soju is made from rice, water and nuruk, a wild fermentation starter, and the fermented product before filtering is called wonju, meaning original base liquor. Julia goes on to explain that wonju, which comes out around 12-21% abv, is a delicious drink in its own right.

When the fermented soju is left to settle and separate, the golden clear layer at the top is called cheongju or yakju – the part that can be distilled into soju. If water is added to the sediment at the bottom, this becomes makgeolli.

“This all comes from this one basic fermentation reaction,” explains Julia. “During the Joseon Dynasty, commercial production of alcohol was illegal, so many turned to home brewing. The matriarch of the family would often be the brewer and pass the skill down through the family, meaning the practice became part of family history and culture.”

Post Korean War, there was no refrigeration and famine meant a lack of ingredients, so distillation became favoured for its shelf stability. Soju back in the 60s and 70s was between 35-50% abv, but nowadays “table strength” green bottle soju clocks in at 17 to 25%, meaning it’s cheap and is drunk at high volume. “Spirit strength soju like Tokki and other artisan producers are trying to pull soju out of that “cheap” category, reminding us it’s a spirit with history and expression,” says Julia. “We’re even seeing it being used in craft cocktails. Soju is having a real reawakening. The green bottle soju will always be there but we have a whole new opportunity for spirit strength soju to shine.”

The craft and care of artisanal soju
Douglas, who produces craft brand Tokki Soju agrees: “It’s good to separate soju in two categories: the green bottle mass produced stuff and craft. The green bottle sojus are essentially just bottling companies. They don’t distill anything and simply source ethanol and add derivative sweeteners in it and bottle. Craft distillers cook the rice, ferment and distill but how everyone does it is different. For Tokki, we wanted to incorporate Western science, equipment and technology. A lot of craft producers use a vacuum still but we use copper stills. Our storage and fermentation tanks are also temperature controlled.”

Tokki also has aged soju, and Douglas explains that a lot of commercial sojus are aged in ceramic vessels. “We don’t feel like that does anything for the liquid except evaporation. So we have begun barrel ageing as we believe all spirits benefit from barrel ageing and we love the romantic idea of time and alcohol. When you barrel age soju, you get an interesting result in that you could technically call it whisky, but we call it barrel aged soju as our mission is to elevate the category.” He also says it’s worth noting that 100 million cases of soju are consumed yearly and out of a market of USD$3.5 billion, craft soju accounts for USD$30million of the share, but hopefully this will increase.

Utilising soju in bars and cocktails
Demie says that he’s noticed things are changing at the bar. “Soju cocktails were looked at as bad as people would immediately associate it with the cheap stuff. Craft soju is now changing that and has made people more open minded. I’ve noticed more bars now have soju cocktails on their menus.”

Sean adds: There’s a Korean saying “Soju is sweet because life is bitter”. Soju is like an old pal, a humble liquor, but beyond that it’s seen as inferior. But now with the rise of craft soju, even high end restaurants are serving it with modern cuisine. I think 2021 is the new era of Korean liquor.”

Sean adds that at Zest, they don’t display bottles on their back bar and give liquors equal positioning in their cocktails. “Three out of our 15 cocktails use soju, but we list flavours rather than ingredients and base spirit. We feel this encourages guests to try things they wouldn’t normally, and they are always pleasantly surprised when they try a soju cocktail.”

Is craft soju the new mezcal?
Mezcal has seen a huge boom, and Julia says she used it as a model when preparing to start a craft soju export company. “Before we get to the point mezcal has, there are a lot of hurdles domestically such as language barriers, marketability and pricing. There’s a lot of things we need to fix before making this category huge becomes a reality.”

Douglas expands on the domestic issues soju faces before it can take the world stage. “A lot of Korea’s alcohol laws and tax structures are archaic and while there have been efforts to make it easier for smaller producers, most of the laws are geared towards the large ones. For example, if you want to build a distillery, you need 150,000L capacity before you can even get a license. When you’re just starting out, that’s not really possible.” Douglas notes that something that benefits soju is that it’s not region specific in terms of classification, so producers can make it internationally, and craft soju brands are beginning to grow globally.

The final word
“Craft soju is a brand new category, and an interesting one at that,” says Julia. “We need more producers and more people to create an industry. I say enjoy the green bottle but go beyond that and try other brands too.”

Douglas concurs: “There’s so much more to it than that green bottle and the context in which you usually drink it. If you think you don’t like it, try other producers just like you would with other spirits like gin or whisky.”

Celebrating a decade of 28 HongKong Street

For the love of mezcal: Jay Khan and Andrew Davis on the agave spirit