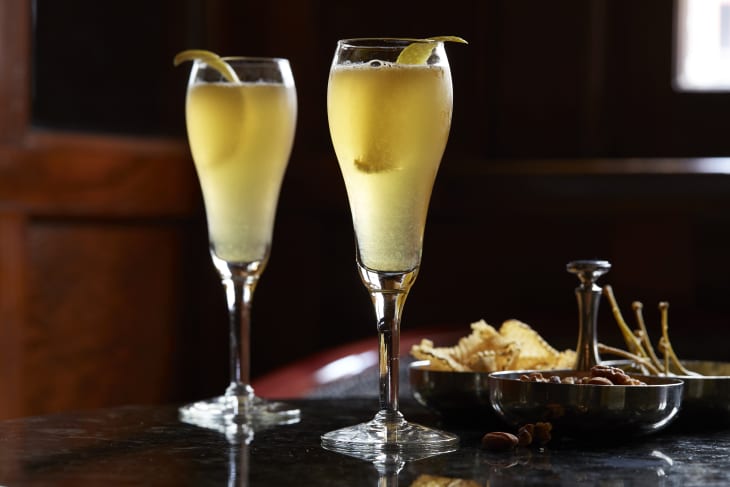 The history of a simple sour made glam with bubbles. By Seamus Harris.

While champagne pops with mere celebration, the French 75 delivers a burst of liquored-up elation. This one is a simple sour, fizzed with champagne, that shot to prominence as the guns of World War One fell silent and the Roaring Twenties revved into gear. The drink is bubbly yet sophisticated, refreshing yet richly ambrosial, and combines innocent joie de vivre with a precise barrage of booze. Still popular after nearly a century, the French 75 is possibly the most lethal ordinance in a barman’s arsenal.

Controversy surrounds the proper base spirit – gin or cognac? The correct answer is gin, though either way it is hard to go wrong. Think of the French 75 as a Tom Collins for a special occasion. Perish the morbid thought, but picture yourself languishing in a muddy trench on the Western Front, morale cracking under the strain of dripping wet cocktail ice (damned Generals fighting the last war again!), and just a few sleepless hours from blowing the whistle to lead your men over the top. Facing down your mortality over a final gin fizz, wouldn’t you pass on the soda and reach for the champagne?

Whimsical as that picture may be, the French 75 does trace its roots to the First World War. The quirky numerical moniker references a famous 75mm French artillery piece, colloquially known in French as the Soixante-Quinze and in English as the “French 75”. The weapon’s hydraulic recoil dampener eliminated the need to realign the barrel between shots, creating an unprecedented rate of fire and fearsome reputation. This innovation in French gunnery became immortalised in a head-pounding cocktail.

Recipes for “75” cocktails appeared immediately after the war ended. Formulas varied at first, but all were based on gin, and most included champagne. The earliest versions sometimes deployed dashes of absinthe and calvados for extra kick, but a simple combination of gin and champagne soon emerged as the standard. The drink became very popular in the United States during Prohibition. Perhaps it was a way of stretching scarce champagne with more accessible gin – presumably on tap at the nearest bathtub. More likely Americans just knew a good thing when they tasted it.

American bar lore often maintains the drink was first made with cognac, with the gin arriving later as a Prohibition Era bastardisation. The cocktail is associated with the Lafayette Escadrille, a flying squadron comprising American volunteers who signed up to fight Germany under French command – a little like the Flying Tigers of the Sino-Japanese war. The Lafayette Escadrille had a Sioux head as its emblem, while its mascots were a pair of pet lion cubs called Whiskey and Soda. Legend credits colourful French-American ace Raoul Luffberry with topping off his 17 kills by inventing the French 75. After each sortie the squadron would celebrate its victories and toast fallen comrades with Luffberry’s signature mix of cognac and champagne. French super-ace René Fonck, said to have shot down over a hundred German planes, perfected the drink by adding lemon juice.

Sadly the legend of the Lafayette Escadrille and the French 75 looks as full of holes as a Fokker D.VII after a meeting with Fonck. While French officers did enjoy champagne with a dash of cognac, the custom predated Luffberry, and no contemporary accounts link the French 75 with the Lafayette Escadrille. Poor Luffberry never got the chance to weigh in on the debate. He was impaled on a fence in a French village after leaping from his flaming plane. Early aviators had no parachutes.

While the tasty and debonair cognac French 75 comes recommended by luminaries such as David Embury and Dale DeGroff, the jauntier gin version is equally delicious and unrivalled for effervescent élan. Unless fresh evidence emerges the gin version also looks to be the uncontested original. Now if those lion cubs had only been called Cognac and Champagne…

19th Century Champagne cocktails (champagne, sugar, bitters, and lemon peel, served on ice) become popular from the 1850s. The first mentions are in San Francisco, where the potion is a favourite of cashed-up gold miners. These addictive libations naturally get spiked with brandy etc, and simultaneously champagne is splashed into other cocktails requiring fizz. The Flowing Bowl (1891) by William Schmidt mentions the Imperial Fizz, essentially a gin, brandy or whiskey fizz in which champagne replaces soda. However, Schmidt’s Imperial Fizz also contained a whole egg, a flourish unlikely to have pleased modern French 75 drinkers.

1914-1918 As war rages across Europe, some witty tippler dedicates a cocktail to the French 75mm field gun that is winning the war for the Allies. The unknown wag was likely American, since the American Expeditionary Forces used the gun in question whereas the English did not. Years after the fact, deceased French-American flying ace Raoul Luffberry is credited with the French 75. No evidence supports the Luffberry connection, and the details surrounding the origins of the drink remain a mystery.

1920s The French 75 becomes a mainstay of Prohibition Era drinking, though initially the recipe is as murky as the story of the cocktail’s origins. The early years of the decade see various “75” recipes in circulation. The only common element is that they tend towards the hazardous end of the efficacy spectrum and pair gin with French ingredients like calvados, absinthe, anisette and champagne.

1927 The first modern French 75 appears in Here’s How (1927) by Judge Junior (real name Norman Anthony). Junior describes the “75 Cocktail” thus: “This drink is really what won the War for the Allies: 2 jiggers Gin; 1 part lemon juice; a spoonful of powdered sugar; cracked ice. Fill up the rest of a tall glass with champagne! (If you use club soda instead of champagne, you have a Tom Collins)”. This recipe becomes the standard, and is recorded by Harry Craddock in his popular Savoy Cocktail Book (1930). Craddock deserves credit for giving the drink its modern name, referring to it as the “French 75 Cocktail”, and noting that it “hits with remarkable precision”.

Mid 20th century The French 75 enjoys several decades of popularity with cultured dipsomaniacs. Scott Fitzgerald and Ernest Hemmingway indulge particularly heavily in Jazz Age Paris. Decades later, in 1969, American radio legend Jean Shepherd discusses the drink on his show, commenting on how it combines high potency with extreme deliciousness, resulting in “normally solid, reliable citizens… getting mouse-trapped”. “Better have your insurance paid up” is his final advice for listeners. The drink undergoes minor evolution during these years of popularity. By the late 1930s some recipes specify a champagne flute as the appropriate glass, and this is how it is served in the film Casablanca (1942). The cognac version also gains headway, and David Embury’s Fine Art of Mixing Drinks (1948) claims cognac is what makes the drink French.

Modern times Improving on perfection is a challenge. Colin Field of Bar Hemmingway at the Paris Ritz suggests a less acidic drink where mandarin juice fills in for lemon. Field particularly recommends this variant for session imbibing. The wisdom of session imbibing of this explosive mix is a debate for another day. Others suggest using fruit eau de vie as the base spirit – pear is a good starting point. Less adventurous but more established variations include the French 76, with vodka, and the French 95, with bourbon.