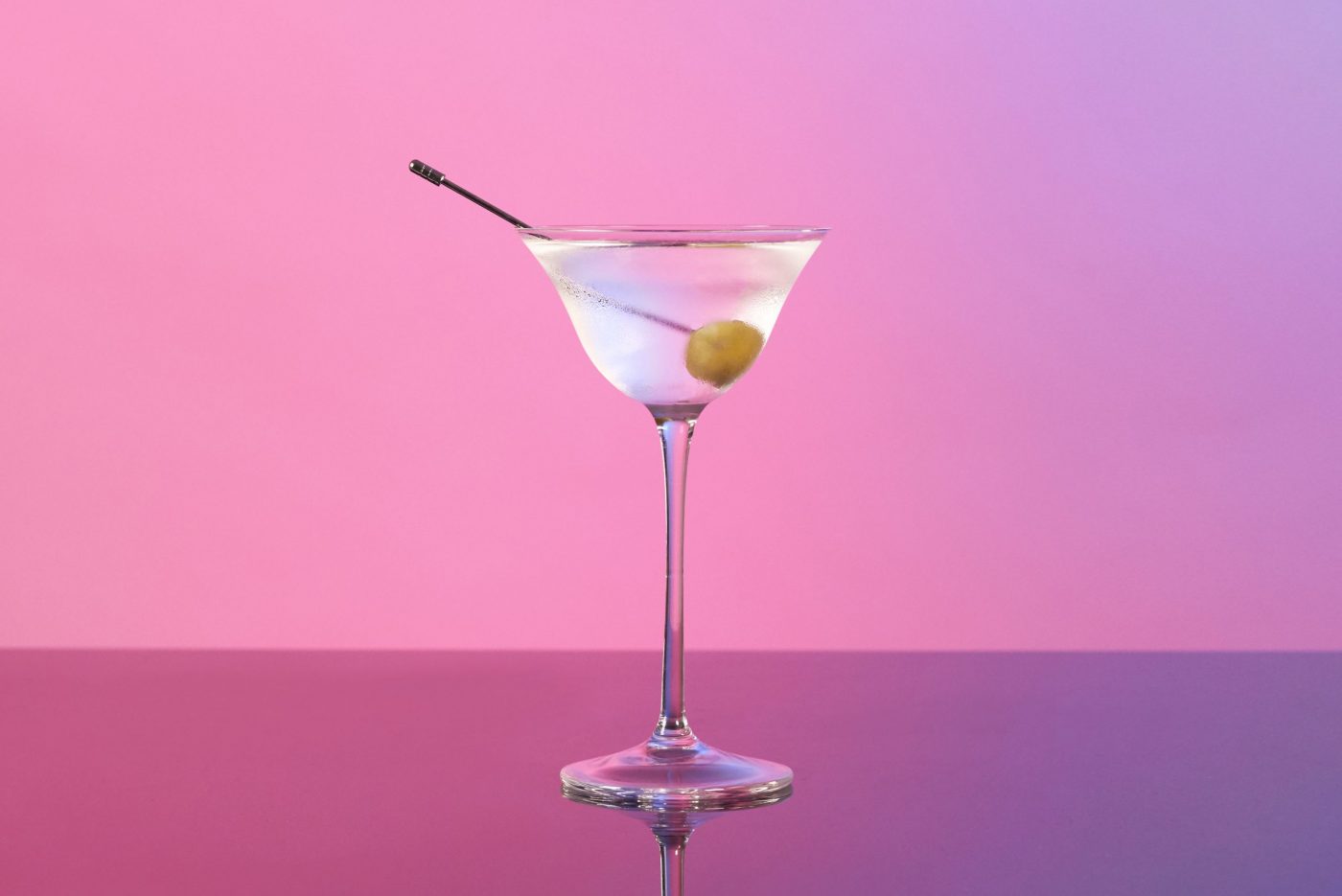 It wasn’t the first drink to be mixed with gin, but it was the one that took over the world.

Juniper flavoured spirits have long been the favourite of bartenders and drinkers alike. Although the “cocktail” is only a few centuries years old, and American, the mixed drink has been around far longer – with the only key difference being the American obsession with ice. Thus punches, possets, flips and the like were popular gin drinks throughout Europe long before the Americans got hold of the spirit. The Dog’s Nose (a mix of gin. Guinness, brown sugar and nutmeg) is a fine example.

The Martini cocktail joined this long list of classic gin cocktails sometime after the mid 19th century. However, there is much debate over where the name “Martini” comes from. One story is that it relates to a British rifle called the Martini & Henry. It was said that the gun had a powerful recoil that kicked the butt of the gun into the rifleman – the same power of kick that the drink had. Another, even more branded story, is that it was named after the brand of vermouth used – namely Martini & Rossi vermouth from Turin in Italy. As the early recipes do not specify a brand of vermouth, it’s not the most believable story.

The most believable story is that it is a misspelling of Martinez or Martine. Differences in spelling were common among the early recorders of cocktail recipes and it is easy to see how the name could become bastardised over time. Although its origins are debated (see below) by the end of the 19th century it was the gin drink of choice for the social elite and has remained on drinks lists around the world ever since, even though drinking fashions and styles have changed.

The Martini is a story of survival, perhaps because its simple ingredients ironically meant it could flex with the times. The Martini wasn’t originally made with the London dry gin of today, but other juniper spirits in all their glory. Genever or Holland’s gin was the first main variant to be used, and became so popular that the Nolet family decided to build a genever distillery in Baltimore in the USA just before Prohibition. Distilled from malt wine, it was popular due to its malty flavour. It could be used in similar ways to whiskies, as demonstrated by the Holland’s Old Fashioned and also our dear Martinez (often referred to as the precursor of the Martini – see panel, right – and described as “like a Manhattan but with gin”).

Finally London dry gin took over as the dominant style, however. It had the flavours that gave the mixologist much to work with. It also had a drier palate in keeping with global trends, and finally, was the easiest product to fabricate cheaply during Prohibition. Alas though, Prohibition did more harm to gin than most. First it was so easy to fabricate (badly) and second it introduced guests to such spirits as rum, Canadian whisky, tequila and of course vodka. Gin sat back on its laurels and, instead of innovating, became moribund with few brand names and even fewer ways of drinking it.

Post Second World War, the Dry Martini had come to be seen as rather austere and the simple Gin & Tonic rather dull. Young people rarely drank gin; it was seen to be either too Establishment, or worse still, the drink of your parents. Furthermore, the Martini had lost its identity to a whole family of bastard kids, increasingly made with vodka. However, it is maybe to vodka’s credit that we have seen the resurgence of Martini culture. First it exposed a generation of drinkers to “Martini” style drinks (albeit far removed from the Martinez originator) in cocktail glasses. Second, the fruited martinis broke down the preconceptions that had crept into modern drinkers minds about what a cocktail is and what the term “Martini” means.  It no longer became stigmatised to be drinking out of a cocktail glass, it became fashionable and cool again.

How to make a Martinez

Many say there is no definitive Martini cocktail, other than the one you personally order. It has become such an individualised drink – some have it wet, some dry; some have it with olives, some a twist, ad infinitum. Because of this, we won’t share what we think is the best Martini and in its stead, share the original Martinez recipe. Most bar folk of a bar book-reading disposition will agree that this drink is the precursor for the Martini we all enjoy differently today. When pushed, these same bar folk would agree that Professor Jerry Thomas was also the man who ignited the spark of creativity in saloons of the mid-1800s that made cocktails what they are today. So here is his recipe:

1780S It is generally accepted that the Martini is a Martinez derivative. But the question is who invented the Martinez? A number of different people can lay claim, the earliest of which was a Franco-German composer called Jean-Paul Eglide Martini (1741-1816). He used to serve a drink to his guests consisting of gin, white wine and cinnamon, and it could easily be argued that this is fairly similar to today’s blend of gin and vermouth (which is white wine-based). Unfortunately, this story is only supported by a handful of internet entries and one reference in a book, so seems more a wishful suggestion rather than a definitive precursor to the modern Martini.

1860S Many cocktail enthusiasts would rather credit the originator of the cocktail as Jerry “The Professor” Thomas. In the 1860s, a man traveling to Martinez, near San Francisco in California, asked Thomas for something new at his bar. His offering included bitters, Maraschino, Old Tom Gin and dry vermouth. It is easy to reason that over time, the bitters and Maraschino were dropped and so the drink became simplified into what we know today as the Martini. It has to be said however that many bartenders these days view Jerry Thomas in a near biblical light, and credit him with inventing life itself. Any Thomas claim therefore needs to be well researched.

1870S Another story is that in the 1870s one Julio Richelieu from the Occidental Hotel, also in Martinez (and a place where, incidentally, Jerry Thomas also worked), invented a cocktail as change for a miner who was buying a bottle of whisky with a gold nugget. In Martinez, they are so proud of this claim that they have placed a plaque on the corner of Alhambra Avenue and Masonic Street to commemorate the birth of their Martini.

1880S Although a rather late entry on our timeline, in the 1880s a Judge Randolph B Martine is credited with either inventing or inspiring the Martini at the Manhattan Club in New York. This is such a late reference that I find it hard to believe it could be the origin of the Martini. However, I do believe it to be an important stepping stone to our modern simplified Martini recipe.

1911 Later on, in 1911 an Italian bartender called Martini di Arma di Taggia mixed a drink consisting of gin and dry (or French) vermouth. This is much closer to what a modern bartender would think of as a Martini, although the balance of the ingredients was much more in the favour of the vermouth – half gin and half French vermouth. Over time this balance has changed to include less and less vermouth. Modern Martinis are now occasionally served with very little vermouth or even with the vermouth omitted entirely. Some say Martini also donated his name to the cocktail – it was probably more a lucky happenstance of creator’s name and drink style coming together.

1953 Popular literary characters have also played their part in the evolution, development and popularisation of the Martini. Ian Flemming’s James Bond character created the Vesper Martini in the original novel of Casino Royale (in chapter seven, to be exact). He commands the bartender to pour:

“Three measures of Gordon’s, one of vodka, half a measure of Kina Lillet. Shake it very well until it’s ice-cold, then add a large slice of lemon peel. Got it?”

The world (and particularly the British drinking public) has been captivated by the Bond character and have been ordering Vespers ever since the book was published in 1953. Bond took the drink from elite members clubs to a more sexy and dark place – but also more accessible. The drink became not a sign of money, more of good taste and refinement, and was enjoyed by a broader cross-section of society.

This article was first published in Issue 4 of DRiNK Magazine, written by Peter Kendall.