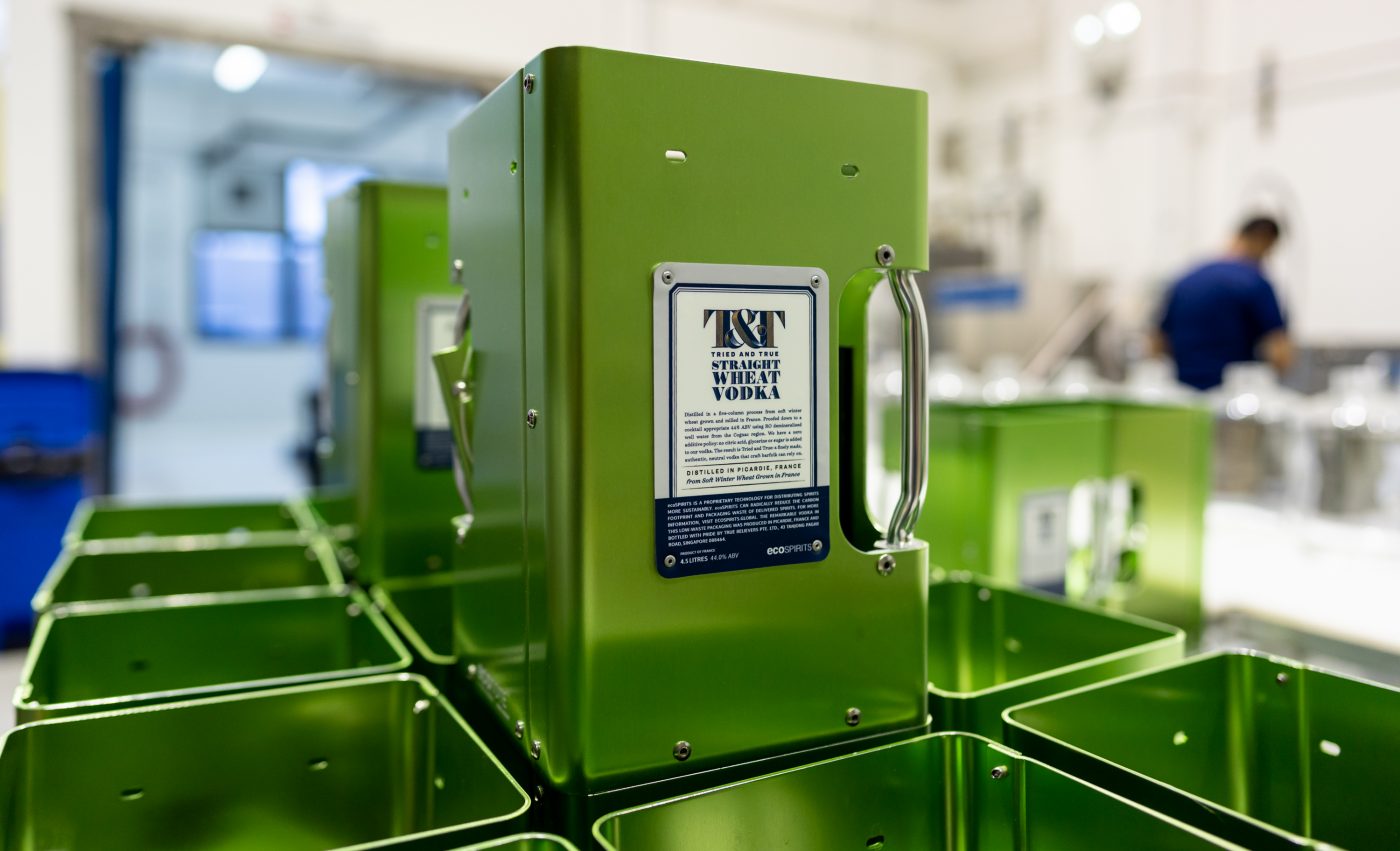 “It began with a relatively simple idea,” Paul modestly explains, “but it has taken an entire team to bring it to fruition.”

Proof has always tried to look ahead and predict what will be shaping the bar industry over the next five to 10 years. In 2015, they forecasted sustainability as the next dominant force in the bar industry, and so the seed of ecoSPIRITS was sown.

Even as a relatively small company, Proof acknowledged the vast amount of boxes, bottles, pallets and glass bottles they move around the globe every year. “In this industry, we celebrate provenance and origin,” Paul notes, “But unfortunately this means spirits must travel tremendous distances to bring them to the bartenders and consumers who want them, generating remarkably high carbon footprints and costs.” This prompted them to explore sustainable options – not just for the planet, but from a business perspective, too.

“We want to reduce the overall impact of a spirit’s supply chain and lifecycle from field to glass to landfill, and find efficiency from a business perspective. This means delivering high quality spirits at a more affordable price, which in turn makes craft spirits more attractive,” Paul says, noting that the savings extend to bars as well.

That’s how things grew from a fledgling idea to the handsome green vessel they have now – dubbed the ecoTOTE.

Single use woes… they’re not just for plastic.
“As far as we know, ecoSPIRITS is the first technology of its kind in the world, based on a simple principle: ending single use glass,” Paul explains. Current discussions around sustainability are heavily focussed on single use plastic, but where does single use glass sit? “It’s a question that very rarely comes up,” he says, “Yet glass is an energy intensive material. The production of one glass spirit bottle creates around 550g of carbon emissions – and the world will make 40 billion of them this year.”

The next problem is recycling. It’s long been available for glass and sure, it’s better than throwing it to landfill – but recycling requires energy too. Paul calls it an “imperfect solution”, noting the best thing to do is to eliminate it in the first place. From research Proof has conducted in Asia, they discovered that Singapore is a leader when it comes to recycling, yet is only recycling 17 per cent of its bottles. “I suspect in most countries in Asia, it’s a single digit percentage of effective glass recycling that’s taking place,” he estimates.

Saving the planet matters – so does saving costs
At its core, ecoSPIRITS was designed to tackle single use glass and generate enormous savings in waste and carbon footprint – while also generating savings in the base cost of the spirit supply chain. Up to 70 per cent of the base cost of spirits is supply chain related – going towards packaging, labour, logistics and the like.

Paul explains something that most f&b operators are aware of: sustainable solutions require an investment by the end user. For example, potato starch straws can cost up to five times more than plastic ones, so operators are given the tough task of demonstrating their commitment to sustainability at a higher cost.

It’s no secret that the majority of a value of a delivered spirit sits in the packaging and shipping, not the liquid itself. “It’s an interesting conundrum because it means that most of the value is absorbed in the packing and logistics, which leaves very little to invest in the liquid itself,” Paul points out.

So what if you could remove those costs and reinvest that into the quality of the liquid? “It means you can offer bartenders a better quality liquid for a similar price point,” Paul explains. “ecoSPIRITS gives you the same spirit but at an improved price point, and there’s the benefit of a 95 per cent savings in cardboard and glass waste too. The benefits are not just environmental – you’re innovating the cost structure to offer the industry an opportunity to upgrade and protect the environment. It’s a rare case where it’s a win for all involved.” Enter the ecoTOTE.
The ecoTOTE – the reusable vessel that carries 4.5l of spirit – sits at the core of ecoSPIRITS as a system.

All the magic happens at the ecoPLANT – specialised, small footprint facilities where Proof can safely and hygienically process spirits from a distillery’s intermediate bulk containers into ecoTOTES for the last mile. ecoTOTES are then sent to bars, where bartenders will fill their own bottles from their ecoTOTES, and when they’re empty, ecoTOTES are sent back to the ecoPLANT. Here they are once again cleaned, sanitised, refilled and re-fitted with tamper proof sealing, then distributed again in the local market. ecoPLANTS are currently up and running in Singapore, Sydney, Melbourne and Auckland, with another ready to go live in Shanghai and plans for one in Hong Kong.

This modern reimagining of sustainable spirits packaging was the result of a conversation between Paul and Proof & Company chairman, Spencer Forhart, who were frustrated with costly and wasteful single use packaging.  They handed their ideas off to ecoSPIRITS technical director Neil Gabie and his engineering team, who brought it to life. The ecoSPIRITS solution rolling out today is the result of almost three years of their work. All of the technology development and industrial design is conducted in Singapore, where the first patent was also filed. “It’s very much a ‘made in Asia’ technology,” says Paul.

Whether you’re a spirits producer, a large-scale hospitality operator or a small independent bar, the industry is genuinely interested and committed to reducing its carbon footprint

Ironically, the idea of sustainable and closed-loop spirits is drawing inspiration from history. During their research, the Proof team noted that prior to the 1880s when industrialisation allowed for cost effective manufacturing of glass bottles, everything was pretty much sustainable. Spirits were moving around the world in casks which were then reused. Heck, even the Romans were using clay amphoras way back.

“When the team looked through the old Jerry Thomas books, we uncovered references to the drudgery of a bartender having to go back and refill bottles from the casks and flagons at the back of house at the end of their shift,” Paul shares. “Large format, reusable containers for spirits were the standard before we deviated to single use containers because of the benefits of industrialisation – if we didn’t take that 100-year detour into single use items, it goes without saying we’d be much better off as a planet today.”

Unlike those cumbersome flagons, the eye-catching ecoTOTES are also ergonomically designed, not too heavy for handling, and shock resistant. This means there’s likely to be more savings in lack of breakages as of course, glass breaks and ecoTOTES don’t, all while eliminating as many as a thousand single use glass bottles over an ecoTOTE’s design lifespan. “They’re designed to pique curiosity but also to reassure that they are a safe, secure and reliable option for spirits,” says Paul. Plus, they all stack and click into each other, meaning they’re reducing between 30 to 70 per cent in back of house storage – especially important in markets such as Hong Kong where space is a premium. The focus in phase one is to offer a complete lineup of house pouring craft spirits, which currently includes Tried & True vodka, Widges gin, Mackintosh Scotch whisky, Arquitecto tequila and Plantation rum. Over time, Proof will announce new spirit partners joining the ecoSPIRITS platform, with the next wave coming in June.

“Change is not easy for human beings,” says Paul, “But the response has been tremendous. In my entire career, there is nothing else we’ve put out that has been as well received as ecoSPIRITS by both bartenders and brand partners. It’s transformative, reducing the carbon footprint of the entire spirits life cycle – from field to glass to landfill – by up to 80 per cent.” Of course back of house requires a few changes, but Proof assures it’s relatively seamless – they provide real world training, online training on their JERRY platform and an ecoKIT welcome program.

Of ecoSPIRITS at The Long Bar, Raffles Hotel (Singapore) Gaynor Reid, vice president communications and CSR, Accor Asia Pacific says: ”The iconic Singapore Sling is the most popular and best-selling cocktail in Singapore, so we wanted to reduce its environmental footprint without any compromise on quality or taste. By partnering with ecoSPIRITS, we were able to revisit the 105-year-old recipe, with repurposed ingredients for a better version and a focus on local sourcing. This allowed us to minimise carbon and waste footprints. Guests can now enjoy the signature Singapore Sling knowing they are playing their part in protecting our beautiful planet.”

2019’s Wonderfruit Festival in Pattaya also partnered with ecoSPIRITS and Plantation rum on all their bars to eliminate more than 2,000 glass bottles over the course of the weekend. So, as Paul says: “Whether you’re a spirits producer, a large-scale operator or a small independent bar, the industry is genuinely interested and committed to reducing its carbon footprint.”

Get to know: The Cuba Libre