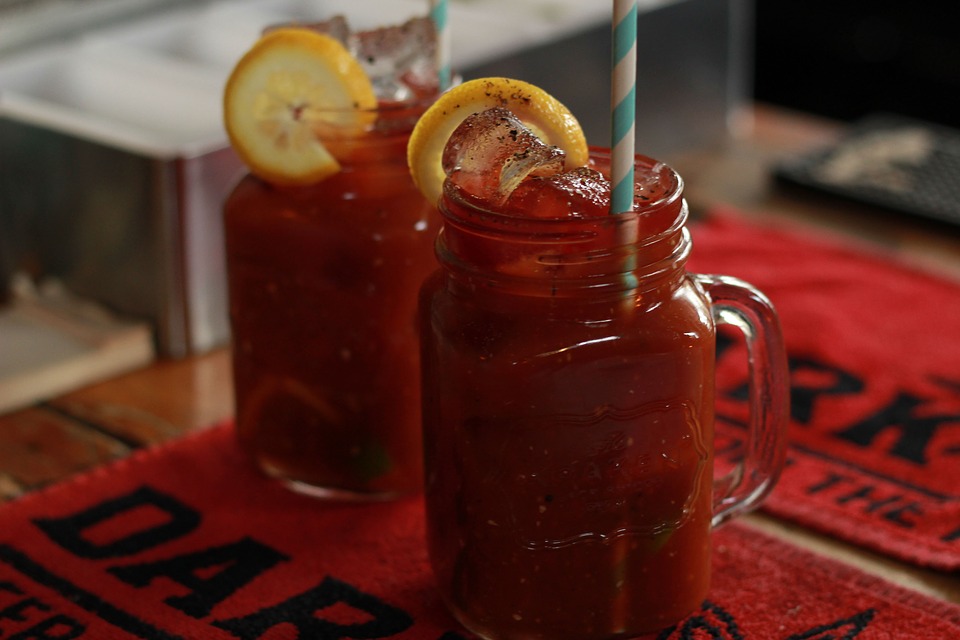 The Cause and the Cure. By Seamus Harris.

For a fixture of classy and conservative American imbibing, the Bloody Mary can appear confused. Its murky red depths hide streaks of everyone from preppy upper-cruster to disheveled breakfast boozer; from fashion fiend to teetotal health nut.

The Bloody Mary is not one of the venerable foundation-stone cocktails with roots in the whiskered saloons of the 19th century. The savoury bite, crisp green garnish, canned origins, and cursory nod to nutrition all reflect chrome-plated modernity. Here we have a piquantly delicious crimson mess, born from a 20th century collision involving the canning industry, America’s vodka invasion, and the hangover.

The Bloody Mary has the usual jostle of stories surrounding its invention. The popular tale places its origins in 1920s Paris, as the creation of Fernant Petiot, an employee of Harry’s New York Bar. Petiot emigrated to the United States in 1925, and was managing the King Cole Bar in New York’s St Regis Hotel by 1934. There the drink became popular, but was renamed the Red Snapper because Petiot’s bosses felt the catchier Bloody Mary moniker too vulgar. The Red Snapper certainly was served at the St Regis Hotel, but the Bloody Mary was also in circulation by that time. Petoit was reticent on details of how he arrived at his innovation. No hungover American tourist, allergic to gin, whisky, brandy and citrus, provided the cue for a quick-witted Petiot to reach for vodka and canned tomatoes and stride decisively into history. Petiot merely said he invented the drink in Paris, and a customer suggested naming it after a girl called Mary from the Bucket of Blood Club in Chicago.

The Bloody Mary is a group drink. The solitary patient dosing themselves first thing in the morning looks sad; start medicating the room and things suddenly get festive

Another tale involves actor George Jessel. In December 1939, columnist Lucius Beebe – noted foodie, wine afficianado, and observer of café society – wrote as follows: “George Jessel’s newest pick-me-up which is receiving attention from the town’s paragraphers is called a Bloody Mary: half tomato juice, half vodka.” This links Jessel with the Bloody Mary before the drink appeared in cocktail guides, which at the very least makes him an early adopter. Jessel certainly became the cocktail’s ambassador, and claimed credit for its invention in a 1950s advertising campaign for Smirnoff.

Likely neither of the above tales are quite true. Although vodka was popular in the Paris of the early 1920s, the earliest recipes for tomato cocktails are American. The Bloody Mary was probably developed in tandem with the American canning industry. From the late 1920s, the increasing availability of canned tomatoes (juice, soup, or whole) saw recipes appear for the (non-alcoholic) Tomato Cocktail. Both prohibitionists and the party set adopted this novel concoction. Teetotalers hit the tiles holding a delicious and nutritious alternative to a real drink, while daylight saw shattered partygoers stagger into kitchens and fumble with can openers. A natural flourish in many cases was to slip some extra “nutrition” in the shaker and breeze through the morning on bonhomie.

The Bloody Mary remains a daytime drink. It works best as a welcome surprise, innocently thrust into helpless hands somewhere near the start of the day. Interestingly, the Bloody Mary seems tastiest when pre-prepared and served to a crowd. In other words it is a group drink. The solitary patient dosing themselves first thing in the morning looks sad; start medicating the room and things suddenly get festive.

Just be careful to stay out of trouble. Days that begin with a Bloody Mary need good management to remain on the rails.

The Bloody Mary lends itself to experimentation. The following is a basic, universally acceptable, recipe. After mastering this version consider variations. Even conservative drinkers are generally open-minded when it comes to a Bloody Mary. But remember: great Bloody Marys are about accenting the tomato, not drowning it in spice.

This recipe can be modified in numerous ways. One possibility is adding steak or BBQ sauces. Another addition, suggesting concern for the drinker’s fragile constitution, is protein in the form of beef consume; simply substitute for some of the tomato juice. Garlic, avocado or grated onion can work, though since these need to be liquefied in a food processor they are best left for when preparing large batches. Infusing the vodka with celery and other spices is another possibility. You can even give the drink an Asian touch with soy, miso, ginger, or wasabi.

A Bloodstained March Through History

1837 Englishmen John Wheeley Lea and William Perrins, already proprietors of a highly successful Midlands pharmacy business, make fortunes with their Worcestershire sauce. Inspired by an Indian recipe, they ferment and age a blend of anchovies, tamarind, molasses, onions, soy sauce, and spices. The distinctive new piquant sauce is soon popular throughout the world.

1868 Edmund McIlhenny, an immigrant to Louisiana, begins selling Tabasco Sauce. Chili peppers are mashed with salt, aged three years in bourbon barrels, then mixed with vinegar to produce another international favourite. Incidentally, Edmund’s son would later serve with Theodore Roosevelt’s Rough Riders, alleged to not only have helped end Spanish rule in Cuba, but also given it the Cuba Libre.

1920s Technological advances in canning and juice extraction transform the delicate tomato from seasonal treat to pantry staple. Drinkers spy a new hangover cure. As the cheerfully titled Here’s How Again! enthused: “The Tomato Cocktail (Non-alcoholic): This very simple concoction is guaranteed to pick you up no matter how low you have fallen. Take a can of tomato soup and place in a shaker full of ice. Add a few dashes of Worcestershire Sauce and shake well.” More elaborate recipes added salt, pepper, Tabasco, and horseradish. In other words, a virgin Bloody Mary.

1930s Vodka arrives in the United States. The Soviet government sponsors vodka parties in New York, leading newspaper columnist O.O.McIntyre to declare: “All the smart bars here are now serving vodka, and many of the accomplished drinkers are quaffing it in lieu of their favorite tipple.” Vodka truly explodes in popularity during the 1940s, when aggressive Smirnoff marketing campaigns pitch it as an alternative to gin and whiskey.

1940s-1950s The Bloody Mary enters the mainstream. Vodka had probably been used earlier to juice up the non-alcoholic Tomato Cocktail. However, the first specific mention of the Bloody Mary comes only in 1939, when newspaper gossip columns note a new vodka-tomato cocktail trend. In 1941 Crosby Gaige’s Cocktail Guide and Ladies’ Companion names the vodka-tomato combination a Red Snapper, and the specialty of Petiot’s King Cole Bar. In 1946 The Stork Club Bar Book lists the same drink as a Bloody Mary, and this is the name that sticks as the vodka wave splashes the cocktail across America. The celery stick garnish allegedly appears only in the 1960s, when a guest at The Pump Room (at Chicago’s Ambassador East Hotel) improvises a swizzle stick with celery from a garnish tray. However, numerous 1950s cookbooks suggest a celery garnish for non-alcoholic tomato juice cocktails, so the alcoholic version was surely getting the same.

1960s-2000s The Bloody Mary becomes a fashion fiend, constantly updating to reflect new f&b trends and stay abreast of drinkers. Canada’s Bloody Caesar uses clam juice and oregano. The Cajun foods craze spawns extreme chili versions, with spicy beans and even peppers replacing the celery. Bartenders play with the base spirit, either substituting alternatives (such as tequila, gin, scotch and even aquavit), or catching the infusions buzz to create unique house vodkas. Growing interest in mixology sparked by the cocktail revival sees ever more elaborate variations. Examples include the transparent Bloody Mary, based on tomato water rather than juice, and the “inside-out” Bloody Mary, in which tomato ice cubes melt into the vodka. Finally, for those with no time to waste sipping cocktails, there are always Bloody Mary shots.