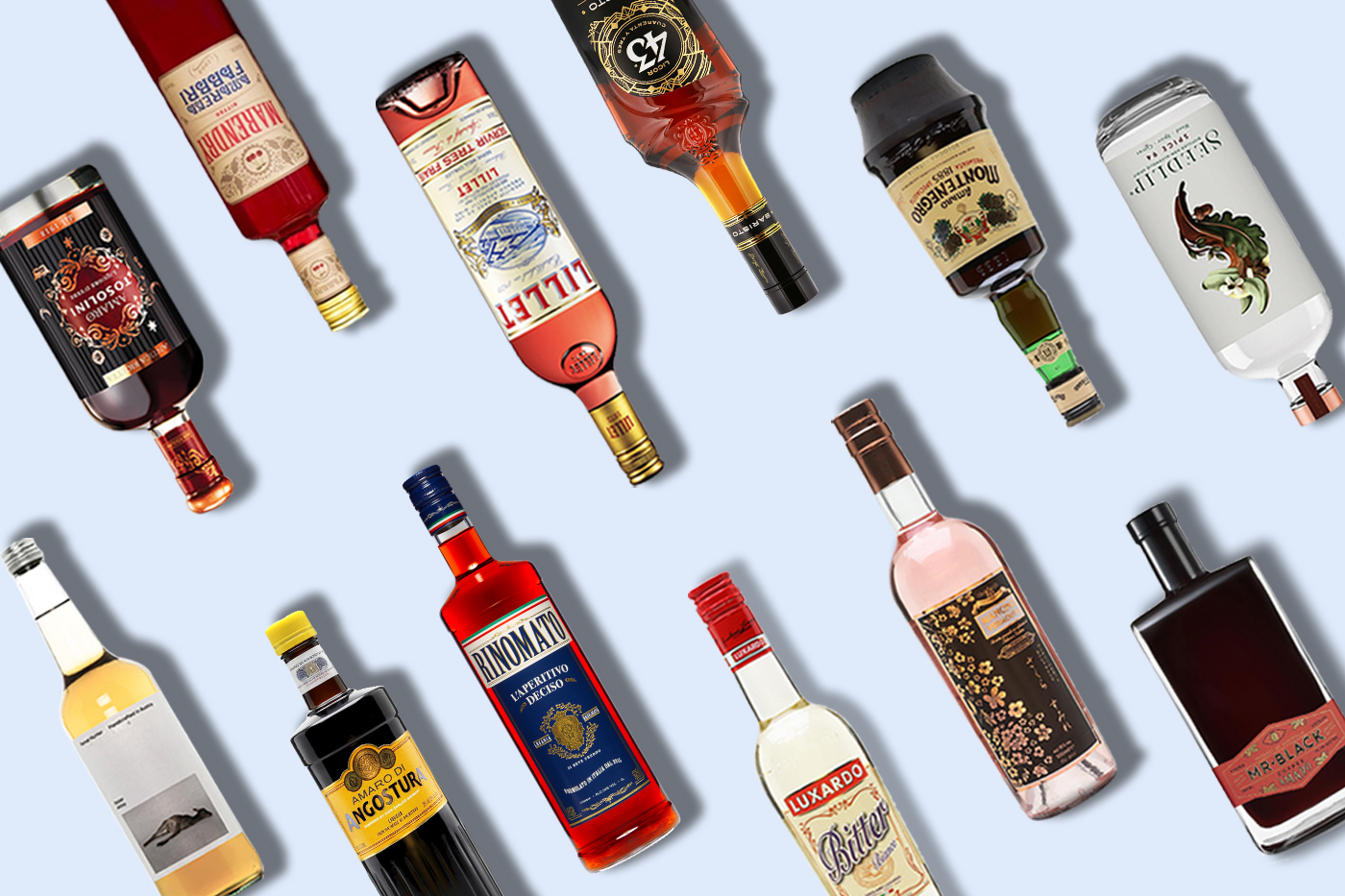 We revisit some of our favourite low abv bottles to enter Asia over the years. Rinomato
A further extension of Giancarlo Mancino’s parade of Italian neo-classics, this aperitivo is another liquid love-letter to the bar culture his home country has produced. The label, inspired by Mancino’s own collection of vintage amari and quinquinas, is a perfect homage to yesteryear drinking: the only clue you haven’t just pulled up on the Amalfi coast in the 250 GT, unpacked the lady and tossed the keys to the Santa Caterina valet being the message “Formulato in Italia dal 2015”.  Chirata, angelica, wormwood, bitter orange peel, sweet orange peel, cascarilla bark, gentian root, and rhubarb are listed as the botanicals, which are crushed before being macerated in sugar beet distillate for a month, then sweetened, diluted and filtered. The first sniff is orange-dominant, followed by vanilla and a green freshness that mirrors the genteel bitterness of the palate. The mouthfeel much less forceful and woody than Campari – more cherries and berries – meaning at Rinomato offers a softer style of bitterness for mixing. 14 per cent abv. Dan Bignold Amaro Montenegro
Amaro Montenegro has been served as one of Italy’s most iconic spirits for nearly 150 years, and with its green jewel-toned phial holding an amber elixir of 40 exotic botanicals from around the world, everything about it emulates a potion conjured through alchemy – the inspiration behind its secret blend and iconic bottle design since 1885. The brand lets you in on a few ingredients from that aforementioned secret mix – artemisia blend, marjoram, oregano, coriander seed, sweet and bitter oranges, petite dried oranges, nutmeg, cinnamon and cloves – but the rest are locked away. The 40 botanicals are boiled, macerated and distilled into 12 essential extracts, which are then blended together and transformed into six aromatic notes: bitter and herbaceous; spicy and floral; sweet and roasted; fresh and balsamic; fruity and sweet; warm and tropical. Those six notes are all brought together by the seventh and final one, “il premio”, a micro-distillation of five botanicals that’s so intense, only one drop goes into each bottle. Sweet, floral, bitter and spiced, as far as amari go, this is one for everybody. 23 per cent abv. Elysia Bagley Mancino Sakura
Originally produced for the Mandarin Oriental in Tokyo last year, Giancarlo Mancino’s limited edition Sakura Vermouth pays homage to the cherry blossoms people travel the world to see every spring. The recipe, with trebbiano wine, features violet petals and cherry blossom and the base is Mancino’s bianco vermouth. A gorgeous rose-coloured liquid, it’s no surprise that the vermouth has cherry and floral notes on the nose, which also comes through on the palate with a buttery roundness from a cherry marzipan finish. 16 per cent abv. Holly Graham Fernet Hunter
Created by Raphael Holzer and Neville Kotewall – two friends who met in Hong Kong – this fernet goes some way to explaining why the meddlesome bureaucrats of Brussels can define the category. It’s yellow, for a start, nothing like the brooding dark of Fernet Branca. Nor does it have Branca’s minty, menthol freshness. After a volatile airing, the nose relaxes into familiar herbal-floral territories of Chartreuse and genepi, with bitter orange, gentian and juniper notes. On the palate, the sweetness is balanced with bitter chamomile, more juniper, and a hot, baking spice finish (the producers actually list arnica, orris root, and lavender). Spirits writer Camper English has tentatively defined fernets as sharing aloe, saffron, quinquina, gentian, anise, angelica, mint and sometimes white agaric – a mushroom that grows on the bitter bark of the larch tree. But these are only from known recipes. Whatever the truth (or lack of it), Hunter has pedigree: Holzer’s great grandfather, Oskar Holzer, worked for Fernet Stock during the Second World War, when the company moved to Austria. His son, Guido, carried on the tradition, becoming a distiller at Stock and later starting his own distillery in Austria’s Brunnwald forest – where Hunter is now made, and flavoured with locally picked, cold-infused botanicals. 29 per cent abv. Dan Bignold Luxardo Bitter Bianco
Luxardo’s Bitter Bianco is a resurrection of a family recipe from the 1930s that will be familiar even if you haven’t tried it. That’s because it is created with the same seven herbs as the bitter rosso – rhubarb and bitter orange among them – with the addition of wormwood, which is why it doubles up on the bitter finish. Distilled, rather than macerated, and at a higher proof (30 per cent abv) it is perfect for white versions of many classics. Clearly there’s reason to have it on your backbar. 30 per cent abv. Jonathan White Seedlip Spice
Seedlip is the world’s first distilled non-alcoholic spirit, blended and bottled in England. Founded by Ben Branson, a man who forged a career in drinks brands and comes from a family with 300 years of farming heritage, the recipes were first created using his small copper still and inspired by distilled non-alcoholic herbal remedies from The Art of Distillation, a 16th-century treatise by English physician John French. Using a bespoke maceration, copper pot distillation and filtration process for each individual botanical (which are top secret) Seedlip is calorie, sugar, sweetener and artificial flavour-free. On the nose, Seedlip Spice 94 is aromatic with strong allspice and cardamom notes, spiked by a lemon sherbet-esque citrus. Cinnamon on the front is followed by a long and bitter taste from oak and cascarilla barks. Holly Graham Amaro di Angostura
A concoction from The House of Angostura, this amaro is everything you love about angostura bitters expanded into a sweet, sippable elixir. Carting you off to Trinidad and Tobago like no other spirit could, exotic spices and aromatic herbs flood the nose and then caress the palate with honeyed waves of cinnamon, cloves and a touch of cocoa. Naturally a stellar ingredient for a modern Trinidad Sour; also try an Amaro Flip or whip up a Caribbean-spiced eggnog for the holidays. Pleasant just over ice, too. 35 per cent abv. Elysia Bagley Fabbri Marendry Bitter
After first launching this bittersweet liqueur in the 1940s, Italian cherry-specialist Fabbri ceased production in the 1970s. But now, off the back of global success for Italian amari, the company has reintroduced Marendry with the craft bartender in mind. Produced with the syrup of Fabbri’s famous amarena cocktail cherries, and strengthened with alcohol to 21 per cent abv, the formula is also flavoured with the bittersweet chinotto citrus. The palate starts with sweet cherry fruit and the tell-tale almond notes of cherry pits, but quickly flips into a precise, one-note bitterness with considerable length. 21 per cent abv. Dan Bignold Amaro Tosolini
Amaro Tosolini is made by the Bepi Tosolini Distillery in Friuli, a company started by the eponymous Bepi in 1943, but his recipe for this amaro predates that. First recorded in 1918, it involves macerating 15 types of herbs, roots and spices such as bitter orange, gentian, rosemary, star anise and the local santonego, or absinthe wormwood, in an aquavit, before being aged in ash barrels and then diluted with alpine water. It smells like a craft cola – all cinnamon, vanilla and citrus peels – and tastes like dark chocolate with the bitter finish of an espresso. Works stunningly well in any coffee cocktail. 30 per cent abv. Jethro Kang Licor 43 Baristo
Inspired by an ancient recipe consisting of 43-plus ingredients, the original Licor 43 Spanish liqueur is one that charms the world. The brand’s latest release is an homage to the barista profession, a fusion of Licor 43 and coffee exclusively sourced from the Canary Islands. Distinguished flavours of chocolate and dried fruits from the Canarian coffee create a balanced blend with the herbal and citrus flavours of Licor 43. The richness of this liqueur makes it a satisfying after meal drink to enjoy alone or mixed with amaro, but it’s also an absolutely ideal choice for an Espresso Martini. 31 per cent abv. Ed Gu Lillet Rose
Hitting the public market in 2012, Lillet Rose was the first new offering from the renowned French aperitif producer in half a century. It’s made by blending grand cru Bordeaux wines (semillon, sauvignon blanc and muscatel) with fruit liqueurs, including sweet orange from Spain and bitter orange from Haiti. It’s then aged in oak for one year before adding quinine and a small amount of Lillet Rouge, which gives the final blend its brilliant pink colour. Its subtle aroma of red berries and minerals instantly reminds one of a fine brut rose champagne. On the palate, it’s fresh and sweet with notes of strawberries, orange blossom, oak and more minerals. The aftertaste is fruity and slightly spicy. Best enjoyed neat and very cold, or with tonic water. 17 per cent abv. Stella Shu Mr Black Coffee Amaro
This coffee amaro is the product of 14 distilled and macerated fresh botanicals – orange, lemon, coffee, angelica, Illawarra plum, coriander, liquorice root, macadamia, gentian, lime, quassia, carraway, grapefruit and cardamom – with the citrus coming from Mr Black’s very own distillery garden in Erina, Australia. The modern, caffeinated take on the traditional Italian liqueur is a natural progression for the Mr Black range, as the company is a gin distillery by day and a coffee roastery by night, meaning they know their stuff when it comes to coffee and botanicals. On the nose, the orange and coffee are prevalent – almost like the aroma of a tin of Roses chocolates in which everyone has left behind the lambasted coffee and orange creams – but in a good way, thanks to the lingering smokiness. On the palate, the punchy orange is first up, followed by smooth coffee in the middle and a little kick of bitter grapefruit on the back. The finish manages to be almost creamy, even with its very apparent citrus. This one won’t be left behind in the Roses tin. Perfect to sip on as a digestif, topped with soda, or for a souped-up Espresso Martini. 28.5 per cent abv. Holly Graham

Get to know: Aperitifs