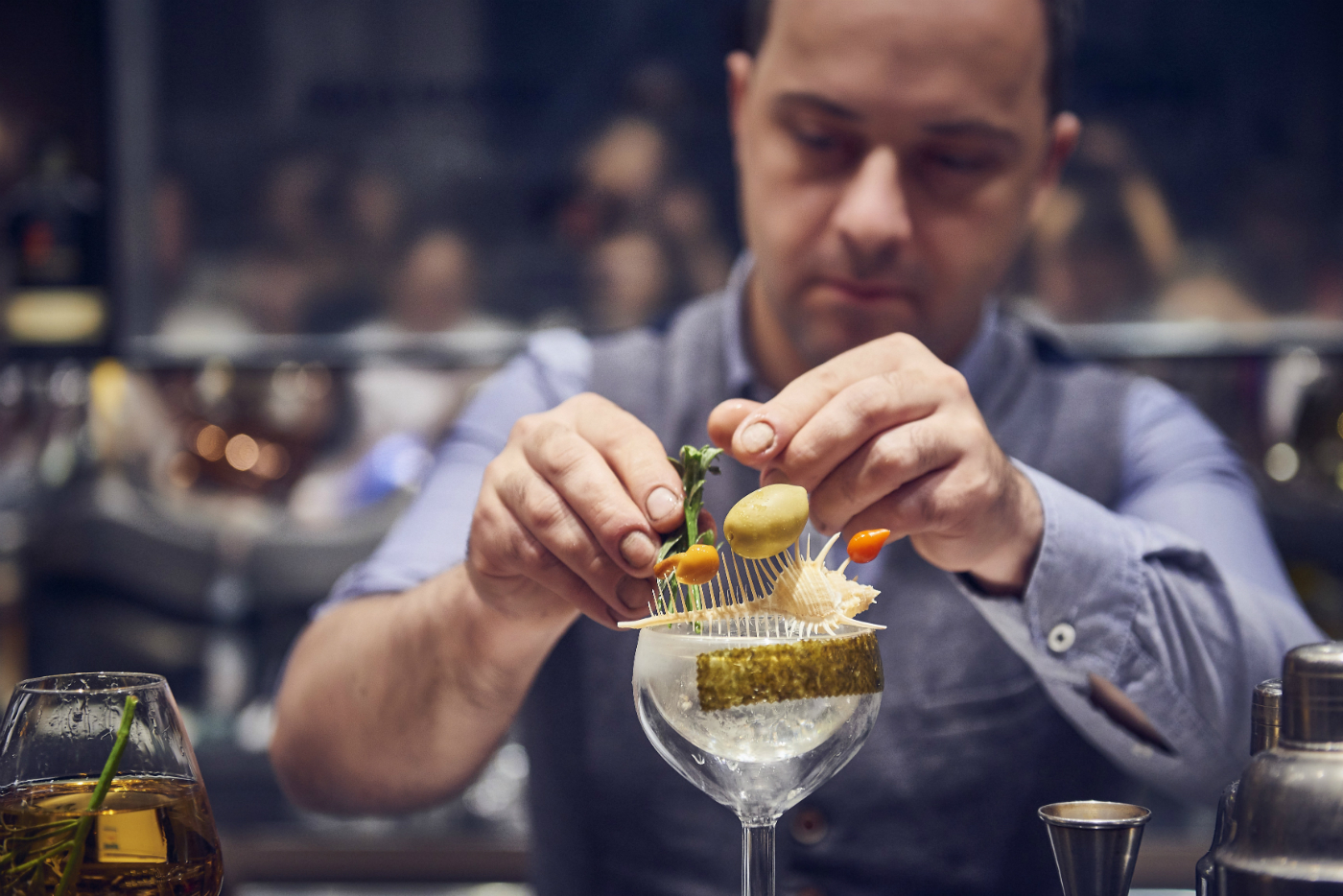 From pickles and ageing to fizz and infusions, Marian Beke pulls the classics into the present. By Rachel He.

The Martini is the godfather in a long line of classic gin cocktails, and its simple ingredients and clean aesthetics have kept it kicking since the latter part of the 19th century. But there’s far more to its success than perfect measures, gin selection and faultless stirring – even with its minimalist nature, it’s a drink with the potential to be intriguingly sexy.

Centred on the namesake for his high concept London cocktail bar – The Gibson – and other Martinis, Slovakian bartender Marian Beke shares a slew of gin and vermouth based possibilities including unexpected ingredients, prep methods and service. Here are six moves from Beke to help up your bar’s Martini game.

1 Pickle for the sake of savouriness
Beke’s regard for pickles is what made the Gibson his bar’s Martini muse, and he encourages tapping their potential. When properly made and used right, pickled stuff is great for adding bit of umami flavour. He’s not talking generic supermarket cocktail onions – the bar is very serious about its pickles.

The Gibson’s signature Gibson is completed by house “double pickled” onions, done first in white vinegar and then again in balsamic. “The pickled onion is the heart of it,” Beke explains, and he reinforces that by serving extra on the side, plus an additional pairing of parmesan cheese to temper the strong drink’s taste. And you don’t have to limit yourself to the classic veg: strawberries, radishes and aubergines are just a few more of the things that get Beke’s pickling treatment.

How to pickle perfectly: Fill a pickling jar with the fruit or veg of your choice. Add salt, pickling spices, vinegar and sugar to the jar; top off with water and seal well. Boil the jar for 12-15 minutes to dissolve the sugar and create a vacuum seal. Store.

2Age it
Aged spirits take on the many wonderful flavours and colours of their barrels, and so is the case with Martinis. Beke’s version of an aged Gibson sits in a balsamic vinegar barrel for six months, where it takes on acidity from the vinegar and woodiness from the barrel.

3 Re-distill? Yes, re-distill.
If you think a rotovap can’t have a place in a classic drink, Beke will prove you wrong. Re-distillation, he explains, helps produce a dry or even “naked” flavour in certain drinks. For a re-distilled Gibson, he macerates all of the ingredients together: gin, vermouth, onions, spices, and lemons. After three days, he re-distills them. “This re-distilled cocktail is 55 to 60 abv and quite dry, but still has the DNA of a Gibson,” Beke says. “This way we created a Gibson drink for lovers of dry and naked Martinis.”

There are, however, two flavours that won’t pass through the re-distillation process: bitterness and heat. But this leaves room to experiment and have a bit of fun with things – like Beke’s “zero-heat” Martini, made from gin redistilled with the three hottest chillies in the world. 4 Infuse wisely.
Exciting infusions can make a Martini stand out if you capitalise on the technique with flavours which work together. To give vermouth a savoury touch, Beke uses a sea rosemary, fennel and purslane infusion, while a clarified milk infusion (done by centrifuge) adds creaminess.

5 Make it fizzy.
Beke thinks of fizziness not only as a texture, but something aligned with sweetness, sourness and other flavours. In that sense, a fizzy Martini may be uncommon, but it’s not unimaginable. For his fizzy Martini, Beke puts all of the ingredients through a SodaStream and serves it over a big ice cube to keep its effervescence. The sake and pickled peppercorns make what he calls “a replacement for Dirty Martini lovers”.

6 With glassware, take care.
“Different vessels can influence the same drink very much,” says Beke. Using distinct glasses can turn one cocktail into several different drinks, as he shows with the aged Gibson. He serves one in a marble glass as is, and then serves the same in delicate glass vessel with three mouths: one mouth gets a drop of truffle oil, the next gets citrus oil, the last get nothing, creating three experiences in one glass. But on that note, be careful with your metalware – you don’t want anyone sipping on a brass-flavoured Martini.