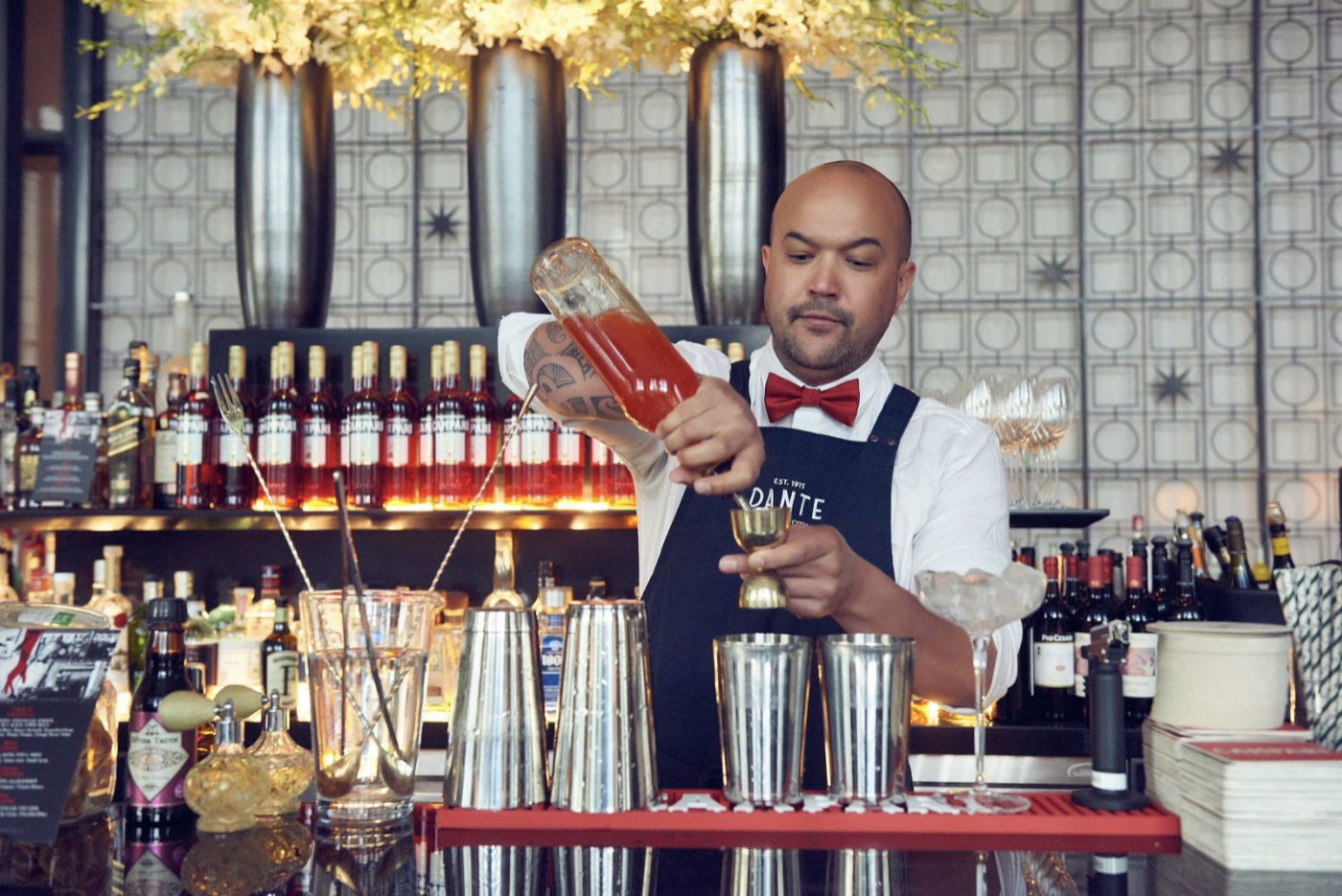 Naren Young’s masterclass mapped out low-abv drinking, the art of simplicity and the rise of global aperitivo culture. By Elysia Bagley.

After more than two centuries helping Mediterranean society ease itself from the rigours of the day, aperitivo culture is spreading its social, low-alcohol approach to drinking worldwide. Instead of afterwork beers, more and more bartenders are giving dry, bitter mixed drinks a place on their menus, while in recent years the Aperol Spritz has all but blocked any other drink muscling in on its warm weather territory.

However, while the Spritz might now be as welcome for watching the world go by outside a London pub as it’s always been in Milan, the dedicated aperitivo bar outside Italy is still a bit of a novelty. Step forward Australian bartender Naren Young, who, in his adopted home of New York, has masterminded one of aperitivo’s most successful intercontinental leaps. Taking over NYC Italian institution Caffe Dante, his team have updated the 100-year-old cafe into an aperitivo-style bar and multifaceted eatery, which is now ranked number 16 on the World’s 50 Best Bars list.

Since opening, Naren has put on dozens of international pop-ups and masterclasses, including this June – as part of Campari’s Red Hand campaign – when he brought his wisdom to Beijing, Chengdu, Shenzhen and finally Shanghai, where he concluded the tour with a six-day Dante pop-up at the Portman Ritz-Carlton. Using Dante as a case study, Naren’s masterclass dug deep into what it takes to successfully transplant an aperitivo concept to a new market. So, with the help of Naren’s insight, as well as some words from a few bars already pushing Italian-inspired menus in China, here’s how to open yourself up to aperitivo.

1 Keep it simple.
With Dante, Naren knew that popularising a historically European approach to drinking in the New York market carried an inherently heavy challenge. As such, the bar’s concept adheres to one big philosophy: simplicity. In Dante’s case, a menu of intimidating, complex cocktails wasn’t going to help aperitivo culture establish an identity, so instead, Naren lives by “twisted classics” – with sections on the menu dedicated to “Negroni Sessions” and “Summer of Spritz”. An uncomplicated menu removes the risk of intimidating guests; this, in turn, makes for pressure-free decision-making and a relaxed, comfortable experience. “We were really inspired by the way that Europeans drink, which is more casual and leisurely,” he explains. “The drinks we serve at Dante are reflective of that lifestyle.”

2 Streamline for the win.
The bar is also able to functionally offer an impressive 50 cocktails on its menu (“maximum capacity”, as Naren says). But crucially, by sticking to classic foundation, drinks use limited ingredients. Many are also served on tap for easy service, allowing cocktails to come out cold, fast, and the perfect size. “The way we make drinks and how quickly we can make them has become a huge focus for us. We try to have a range of six to eight drinks on the menu that we can crank out in a matter of seconds.” Elsewhere, in Shanghai, Camden Hauge echoes that approach with coffee and aperitivo cafe Bitter. “I wanted to move against the ‘fancy star-tender, garnished-to-the-hilt, hour-to-prep cocktail’ that has previously ruled Shanghai,” she says. Aperitifs, on her watch, act as a means to draw friends together, rather than becoming the starring act themselves.

3 Low abv is where it’s at.
The Dante menu also pays respect to – Negronis aside – the low-abv essence of aperitivo drinking, aligning with the current movement towards low and no alcohol drinking. These days, brilliant cocktails don’t need to contain as much alcohol as the brown, stirred drinks that revived classic cocktails a decade ago, and Dante proves it with its signature – the Garibaldi.

4 Simplicity: it takes some doing.
The house take doesn’t stray from the classic composition of Campari and orange juice, but Dante has worked hard to develop the best of all possible versions. “Creating something so simple is actually very hard, much harder than trying to do something more complex,” says Naren. Its final form utilises a super high-speed juicer that aerates the juice, resulting in the bar’s famous “fluffy orange juice”.

5 Create talking points.
Naren also incorporates an extra ritual into the Garibaldi signature, placing it on a little white plate for service, elevating the drink from everyday Italian aperitif into a Dante cornerstone that people photograph endlessly. It delivers sophistication in simplicity… and a priceless talking point. “It’s important for a bar or restaurant to have something they’re really well known for,” says Naren. “We suspected [the Garibaldi] would be popular, but we never thought it would be copied all over the world like it is now” – he even spotted a Dante-inspired version on the menu at Shanghai’s Sober Cafe. As he emphasises, a memorable house signature can serve as a marketing tool around the world.

6 Vibes are as key as the cocktails.
While well-executed drinks are essential, they alone do not make an aperitivo. Naren shares that Dante is something different to everyone: a cocktail bar, cafe, coffee shop, tea house, gelato shop, breakfast spot. Its versatile nature is universally appealing – and others take the same approach. With the opening of their first concept in 2013, Shanghai’s Funka Group rolled out more than their venerated Super Spritz signature drink. “Four of us, all Italians, started it, frankly, because we missed that ‘Italian aperitivo’ atmosphere… good aperitivo drinks and good food in an authentic and casual space,” they say. “We see people from all walks of life partake in our aperitivo.”

7 There’s strength in concept.
As with being disciplined when it comes to simplicity, Naren emphasises another key point: staying true to your concept. Put your stamp on everything (as Dante literally does with logo-stamped ice blocks, bitters-stenciled foam caps and the like), incorporating elements that will flourish in today’s social media-obsessed sphere: “It’s about creating magic moments for people,” Naren says. “People have a different experience in the bar because of small details.”

8 Make it a lifestyle.
The real appeal for China’s current youth audience is the social aspect rather than the drinks, says Warren Pang, owner of Janes & Hooch in Beijing: “The aperitif lifestyle blends into the fashion realm, and that’s attractive to a hip, trendy market”.  Warren fell in love with the habit while living in Milan and particularly wanted to capture the lifestyle part of it, seeing his consulting project at Gaga Chef in Shenzhen as the perfect platform for introducing a new culture of drinking. In a city with a young, trend-focused audience, where people are willing to try new things, Warren is confident in aperitivo’s ability to draw a crowd: “It’s low-abv, it’s very hashtag-able. It’s something cool and refreshing to the scene”.